Update, August 22: Biomutant has a gameplay trailer, where you can see its open-world, some of its combat, and a few of the other tricks up its sleeve. Its developers have also confirmed that the game won’t contain any fetch quests.

Biomutant has its first gameplay trailer. The game, which is the new title from THQ Nordic, is a kung-fu action RPG, and its trailer shows off a lot of its beautiful open-world.

Wondering what else is on its way? Here’s our list of upcoming PC games.

In the video, we’re taken from lush tropics, to arid deserts, to freezing mountaintops, following an as-yet unexplained raccoon thing, who’s likely to be the game’s protagonist. The trailer also shows how you’ll be getting around this huge world, with boats, mechs, a glider, and even an enormous airship all featuring.

There’s also quite a lot of combat in the trailer, although very little of it is explained. You’ll be able to battle from atop your mech, use guns, pull off impressive melee combos, and potentially even use magic powers, which could be part of the game’s apparently extensive mutations mechanic.

Biomutant’s world seems full of mystery, and there’s a lot touched on in the trailer that will hopefully become clearer over the next few months. At one point, your protagonist sounds a massive conch shell, and elsewhere he tinkers with an enormous compass.

In other news, the game won’t have any fetch quests. Stefan Ljungqvist, head of studio at developers Experiment 101, says that “I’m not a huge fan of collect/fetch quests,” and “that’s to have what we call secret discovers, or exploration, where actually find something interesting in the world and that will give you a small personal quest line.”

Update August 21, 2017:Biomutant has got an announcement trailer.

Biomutant, a new IP from the people who brought us Just Cause, and the game that’s taken an early lead in the running to be Gamescom’s most interesting announcement, has got a new trailer.

A listing for aPC Collector’s Editionhas also surfaced, containing artwork, an OST, and a figurine of the plucky raccoon-like protagonist. The listing also has some new screens, showing the raccoon… thing jetskiing and hang-gliding around a varied bunch of colourful landscapes. 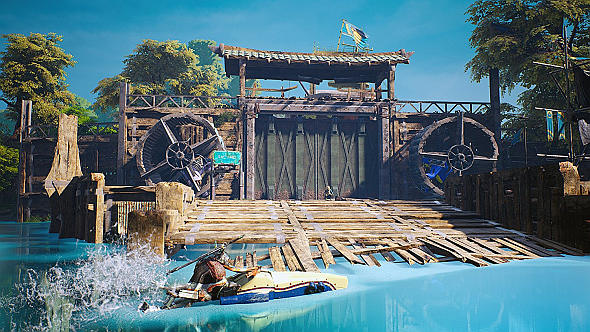 Update August 21, 2017:Biomutant is a post-apocalyptic open-world ARPG. An Amazon listing has revealed that it’s due for release on December 2018.

AnAmazon listinghas revealed more information about Biomutant, the next game from THQ Nordic. The game will be “a post-apocalyptic open-world ARPG that delivers real-time melee, shooter and mutant ability action.”

The listing goes on to detail some of Biomutant’s features, most important of which seem to be the fully customisable central character, a one-eyed raccoon-looking thing. Customisation will be available via two main systems: Bionics are powerful prosthetics, while Mutations offer physical changes and special powers. There’ll also be a crafting system and a series of automated sidekicks, including a customisable mech.

The listing also comes with a release date, suggesting you’ll be waiting a while for Biomutant, which is currently scheduled for release on December 31, 2018.

As reported by Eurogamer, a picture has popped up on Twitter, showing that awesome tagline along with an image of… well, I’m not sure, actually. I think it’s a one-eyed, tattooed raccoon clutching a big ass sword and wearing a bullet belt.

There’s also a handful of action in-game shots that suggest there’ll be running, flying, and… water-skiing? Boating? Maybe? Who knows. No signs of kung-fu just yet, though.

From the logos on the page, it seems as though Koch Media will be the publisher.

The advert intimates the game’s coming to PC in early 2018, although we’ll probably hear more from Gamescom. Watch this space.