There's been a lot of talk over the past few years about repetitive open-world game design, and Biomutant is the worst example of it that I've seen to date. From conquering tribal outposts to battling each region's 'worldeater' boss, each new area in Biomutant typically starts strong, and then repeats the exact same process until it loses any appeal.

You begin this idiosyncratic martial arts fable by creating your own biomutant. There's an impressive character creator that lets you pick your mutated rodent's starting stats, class, and elemental resistances, as well as cosmetic features like fur style and colour. Some heavy-handed tutorialisation guides you through the basics of combat, character progression, and crafting, before dumping you into the post-apocalyptic open world itself. Your goal, as ever, is to save the world by ending a tribal war and defeating four worldeater bosses.

The tribal war can be solved in a couple of hours. You pick one of two tribes to ally with at the start: the Samurai armour-clad Jagni, who are basically just Nazis, and the peace-loving Myriad. It sounds like a pretty stark contrast to kick things off, but the game plays out the same way whichever option you choose. Align with the Jagni and you'll set about onboarding the valley's other tribes by violently invading three fortresses per region, and despite favouring peace and unity, you'll do the same thing if you side with the Myriad.

Clearing these outposts only takes a few minutes, and both the pattern and method of taking them down is mirrored in different regions. The first outpost is a short, staged battle between a few enemies and some mortars; the second tasks you with setting up a trap or ranged attack outside of the fortress; and the third involves finding a single-use hard hat and being fired over the fortress walls in a catapult. 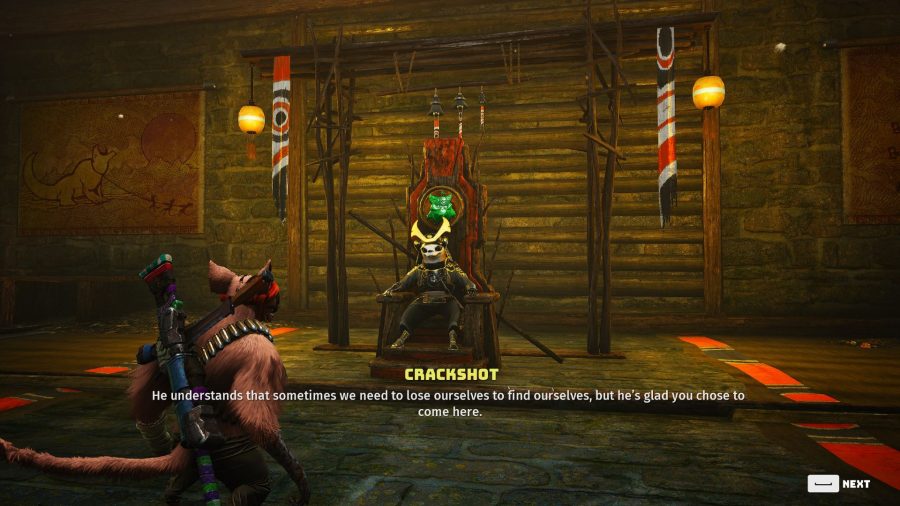 This feels relatively varied the first time you go defeat a tribe, but when the format is repeated almost exactly it quickly wears thin. Fortunately – depending on whether you see it as a mercy or an indictment of Biomutant’s quest design – you only have to beat two of the five rival tribes before the game gives you the option to instantly recruit the remainder.

It’s not just that each region has the same number of outposts and that you clear them in exactly the same way. Even the dialogue, choices, and enemies barely differ from tribe to tribe. Even running back through a fort you’ve cleared, you notice that the layout and architecture is near-enough indistinguishable from stronghold to stronghold.

During one of the first outpost missions, I encounter a massive Rancor-like beast that’s wearing fluorescent pyjamas in the tribe’s colours, the sheer cuteness of which brings a smile to my face even as I’m stabbing it with a makeshift machete. I get the sense that I’m fighting something unique and that there’ll be an illuminating or humorous outcome. But no, the beast is just wearing pyjamas, there’s no discernable reason for it, and it doesn’t fight any differently than its naked counterparts. And when I start clearing outposts in the next region I come across another pyjama-clad behemoth at the exact same stage. 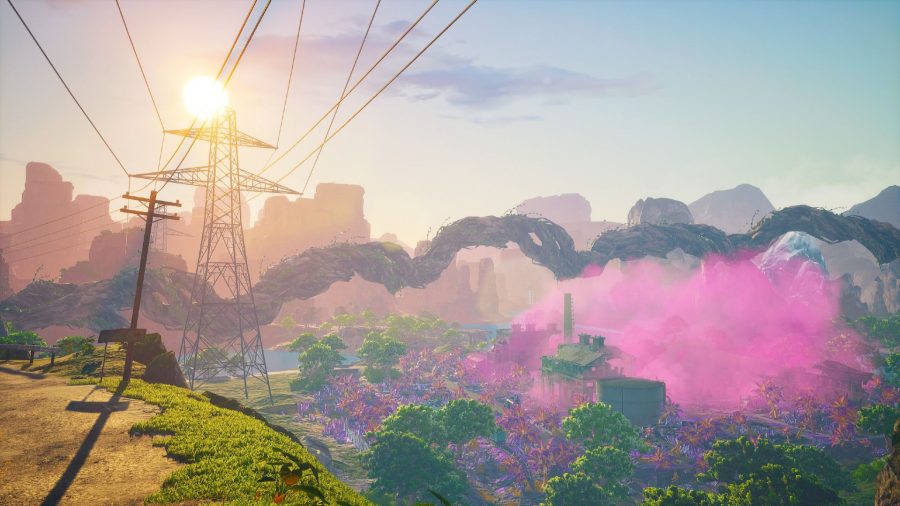 This recurs in Biomutant’s other main quest, defeating the four worldeaters. These furry monstrosities act as the final bosses for their respective regions, and to get to fight them, you need to reconnect with a friend from your childhood, help them build a vehicle, and then use that to access and beat the boss. Again, bits of dialogue repeat between each character, but at least the missions vary a little bit.

Biomutant apes wuxia and wire-fu cinema with its melee combat, letting you hang in the air wailing on enemy rodents for ages

The boss fights themselves are also remarkably similar to one another. In each, you use your mount to zoom around the arena avoiding attacks, shooting constantly at little zits that sprout all over the monster, and occasionally throwing bait to distract it so you can target its weak spot.

Biomutant’s combat is actually very good, but as soon as you cross the threshold of a boss arena you’re limited to using ranged weapons that you fire from your vehicle. There is one almighty – and awesome – exception when, halfway through the fight, you get eaten and continue brawling inside the worldeater, climbing up the walls of its stomach, avoiding worms, and meting out melee combos on its heart. 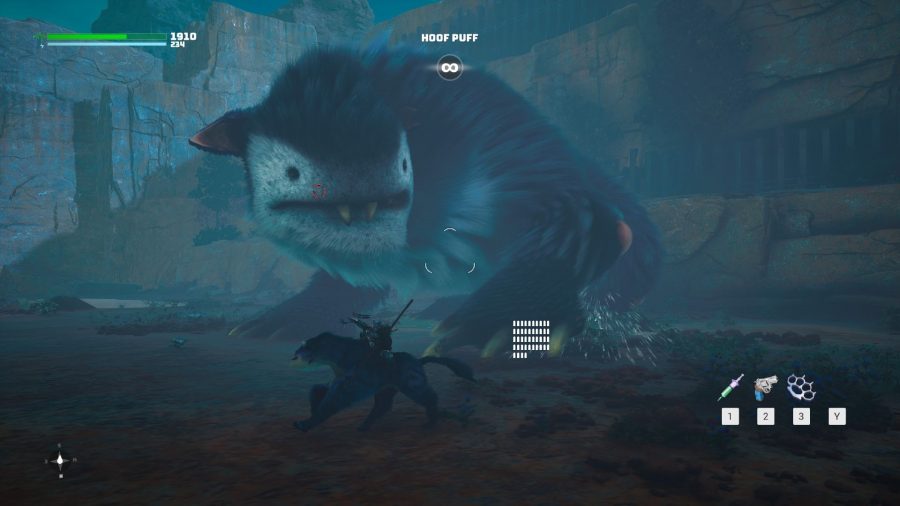 Against normal enemies, you can seamlessly blend ranged combat with melee attacks, abilities, and ultimates to dispatch a string of thugs in one fluid motion. Biomutant apes wuxia and wire-fu cinema with its melee combat, letting you hang in the air, wailing on a rival rodent for what feels like an eternity, before knee-sliding across to another enemy as you fire a pair of hand cannons at them, and finally launching into a slow-motion spin kick to finish them off. Different weapons have different movesets and abilities to upgrade, so it feels like there’s always something fresh to master.

You can also swap melee and ranged weapons mid-fight, and I had a blast rotating through my arsenal to create increasingly convoluted combos. There’s an extra layer of finesse if you can manage to time dodges and parries perfectly, although I found I rarely needed to do more than run around to avoid incoming damage.

Abilities are also a ton of fun, and are refreshingly playful. My favourite, Fungi, spawns a bouncy toadstool right in front of you so you can start an aerial combo, but it can also be spawned directly beneath an enemy, launching them into the air for you to bully. Freeze, another personal favourite, creates a massive explosion of cold and then leaves an area of the battlefield icy so that any enemy who steps on it will slip and careen away across the field. 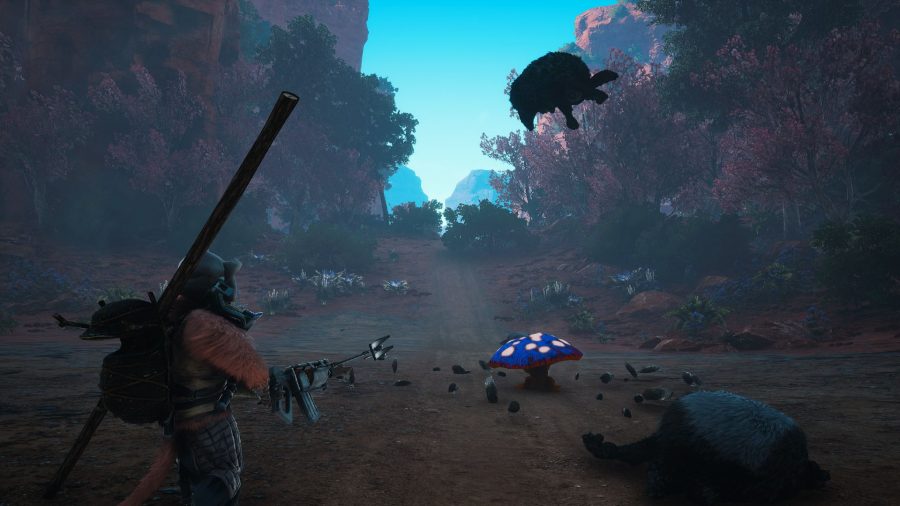 The crafting system, while providing some reason to rummage around old buildings for loot, was rarely useful in my playthrough. I was occasionally able to graft some upgrades onto my armour or add an extra damage modifier to a gun, but the campaign dredged up enough good loot to keep me comfortably above the difficulty curve.

If you plan on spending a lot of time with Biomutant then there are some neat weapons you can cobble together, like a cleaver with a banana for a handle or an LMG that instantly reloads whenever you get a kill with it.

Fancy it anyway? You can buy Biomutant here

Unfortunately, Biomutant’s best features are often smothered by its oppressively repetitive quests. During my playthrough it often felt like I would spend a few minutes traveling to a quest marker, only to complete the single fight that awaited me in half as much time. With the quest complete I’d then have to trudge over to the next marker and repeat the process. 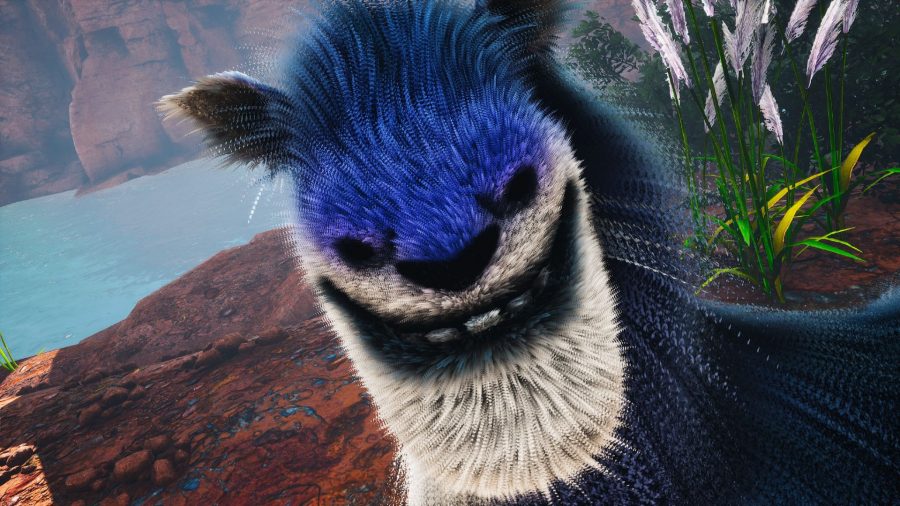 It takes a few hours until you unlock your first mount, and while this does expedite the action, it’s impossible to escape the feeling of a great combat system being buried by baggy open world game mechanics.

I do have a number of other gripes. Every single bit of the story is delivered first through an invented language and then relayed by a narrator, removing any emotional connection. The script is written almost entirely in proverbs and puns, but lacks the wisdom or humour to justify this rather arch, alienating approach. Mission prompts and map markers are inconsistent, forcing you to wander around for a few minutes looking for a cave entrance, which adds more drudge to the process of exploring its open world. And while I think the art style is striving for quasi-realistic muppet creatures, the animals and beasts you encounter look like furry Etch-A-Sketch drawings.

If there's something to love in Biomutant, it's the vibrancy of its environments and its brilliantly dynamic combat. Unfortunately, you have to wade through so much repetitive, tedious open-world slurry that it becomes hard to enjoy.