You know the Tom Cruise film Edge of Tomorrow? Better to know it by its tagline: Live, Die, Repeat. That’s what BIOS offers in unforgiving first-person: Groundhog Day sprints through simulated hostile environments that you’ll run over and over, learning through trial and fatal error, until you can rattle through a series of specific events with almost unnerving prescience and virtuosity.

It’s out on Steam Early Access where, over the next year, its veteran developers will go through their own process of refinement in pursuit of perfection.

Last year, Julien Cury and Louis-Pierre Pharand were newly separated from Ubisoft Montreal, the flagship studio they’d helped run for a decade. Walking down a San Franciscan street during GDC, they talked about the “good old days” – the middle of the ‘90s, when shooters were fast and just a little bit punishing.

They quite fancied making one. But having worked on a couple of Far Crys, they didn’t want to make another.

“It’s like NASCAR,” said Cuny. “It’s always the same. If you play a NASCAR game, you’re probably going to end up turning in a circle. FPS sometimes feel a little bit like that.”

The answer, they decided, was genre cross-pollination – a pairing of ideas that could yield a game both familiar and fresh.

“We love the idea of crossover,” said Cuny. “Christopher Nolan wanted to do two movies – a movie about dreams and an ice movie, and he ended up doing Inception.”

And so the idea came to interweave the breakneck ‘90s shooter with a game Cuny and Pharand had admired while at Ubisoft – Trials. 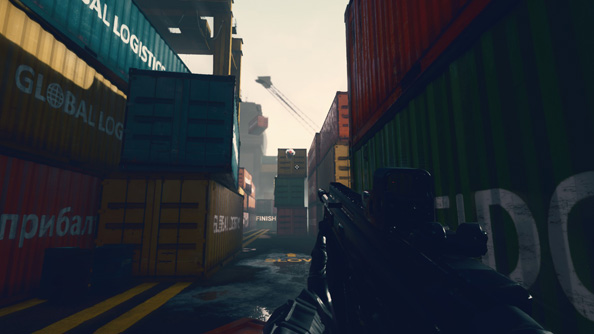 From RedLynx’s ragdoll extravaganza, they took short, minimalist maps and a die-and-retry ethos. In their FPS prototype, however, players were “still being shot at” – which lent proceedings a new tension and difficulty. They called the game BIOS – basic input/output system.

A player’s first few runs at a BIOS map are recon missions. They feel a little overwhelmed, and die often. But over a series of replays, they carve out a route – shaving off seconds and minutes along the way to maximum efficiency.

In testing, Canadian indies PIXYUL – who now have Deus Ex: Mankind Divided’s programming director, Philippe Leblanc, in charge of tech – saw that players were more than halving their initial times over several playthroughs. And not simply by hurtling through the levels; some maps require players learn when precisely to stop, aim and shoot before taking off again.

“It’s kind of like an obstacle course,” said Pharand. “You make decisions: do I hide behind this guard, do I jump over this one? Where do I maneuver and what’s my strategy?” 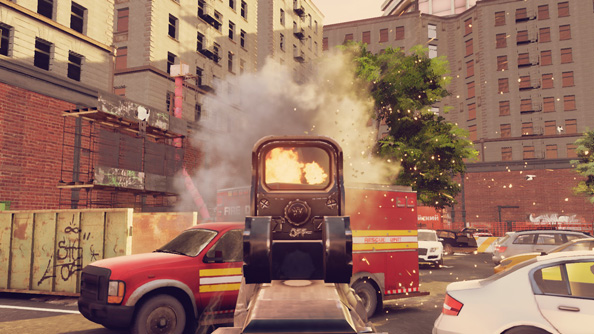 The simplest levels in BIOS’ current Early Access build are split between corridor challenges, which involve lots of running and potshots, and rooms where you might have a real fight on your hands. Areas can be multi-pathed, and players need to try different approaches to find the fastest time, or the thinnest hail of bullets.

Those maps are architecturally basic; styled like a computer simulation. But others are more complex in aesthetic and tougher to finish. One port level funnels the player between coloured containers, before opening up vertically to introduce gunmen on higher levels. It gets intense.

“If you’re able to master these maps, you’ll feel a little bit like Neo at the end of the first Matrix when he’s fighting Agent Smith and making the moves in slow motion,” said Pharand.

“That’s kind of the feeling we want to have for players – you’ve repeated, you’ve mastered, and you’re able to combine all those elements in nailing the perfect run.”

But don’t mistake this for Mirror’s Edge: for their starting point, PIXYUL picked a simple moveset any FPS player will be able to understand. 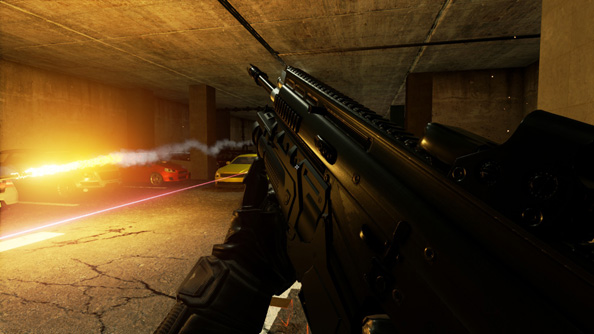 “Unreal is an engine made for shooters,” said Cuny. “Now it’s much broader than that, but you can still feel the influence. If you open up Unreal Engine 4, you have an FPS template.”

The team have tinkered with UE4’s presets to establish an on-foot racing model. They’ve considered trajectory, collisions, and the inertia involved in taking turns at high speed. In the game’s present state, BIOS players slide ever so slightly before they come to a halt – and can’t spin on the spot in midair like they would in a traditional shooter.

“People cannot necessarily perceive it, but after 10 to 15 minutes they start to compensate when they turn,” said Cuny.

PIXYUL don’t ever intend to go full parkour – but might yet implement wall-jumping, just to see if it works.

The studio have a whiteboard filled with ideas they can throw into the game and, if necessary, strip out again. That flexibility is indicative of the distinctly un-Ubisoft development process they’ve embraced. BIOS had been in the works for just six months before its launch last Thursday – and will be in Steam Early Access for twice that long.

“Better to miss the target and have direct feedback we can really build on,” said Cuny, “instead of trying to find the perfect balance alone in our basement, just the four of us.”

The plan is that BIOS won’t simply find a specific point along its shooter/racer spectrum and settle in, but slide up and down that scale via different modes. While one might appeal more to a CoD player, another will accommodate the tastes and talents of a Quake Arena veteran. 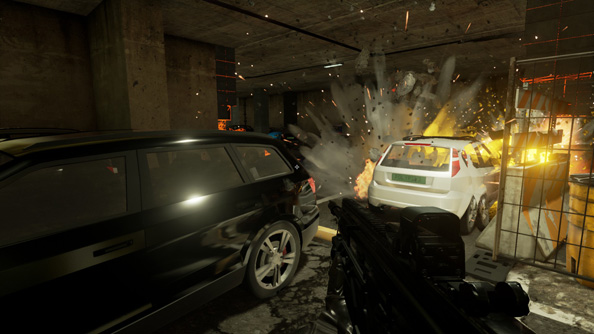 “We don’t hope to please everybody,” said Cuny, “But we think the concept is broad enough that if we do it the right way a bunch of people on each part of the spectrum can find enjoyable things to do.”

PIXYUL have been careful, too, not to write themselves into a corner with lore. BIOS’ anything-goes simulation means its creators don’t need to commit to a narrative that might limit the game.

“Keep in mind I’ve been working on Assassin’s Creed,” said Cuny. “Which has a lot, a lot, a lot of constraints about story, making sure everything is connected.”

While Cuny is relieved to no longer have to liaise with historical advisers, fellow exec-in-exile Pharand is proud to be “getting his hands dirty” – building levels, playing his game again and again in the name of fine-tuning. He’s found satisfaction through repetition, just as PIXYUL hope BIOS players will.

“Once you’re in a really small team, like four guys, your input on the game is huge,” he said. “It comes with big responsibilities, but at the same time it’s really gratifying.

“Ubisoft is a big studio. We had great positions. We were working on multiple projects at the same time. But Julien and I are entrepreneurs, and we just wanted to go back to making games and being on the ground, pulling up our sleeves and doing the work.”

In this sponsored series, we’re looking at how game developers are taking advantage of Unreal Engine 4 to create a new generation of PC games. With thanks to Epic Games and PIXYUL.