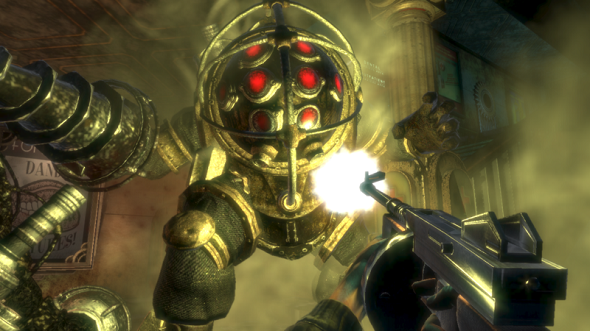 It’s been over a decade since the original Bioshock, so you might imagine there’s nothing left to discover about it. Turns out, you’d be wrong: an anonymous post on 4chan, apparently from a developer, describes an obscure easter egg mocking Paul Hellquist, one of the game’s designers.

The story emerged on a 4chan thread about game developers using drugs to get their creative juices flowing. An anonymous poster says they have seen it happen, and makes some wild claims about their own time working on Bioshock 2. After being challenged on whether they worked in the industry, the poster then offers this obscure BioShock easter egg as proof:

“In BioShock 1, go to the second half of Hephaestus where you first encounter [Andrew] Ryan in person. Use Incinerate to get you down to 1 HP, then use it again on the area where the cutscene triggers and walk into it. You’ll die right when the scene starts, but wind up in a Vita Chamber outside the map. Turn on Art Captions and you’ll see a developer message about Paul Hellquist not doing his job. No-one has found this bug yet publicly; it’s in all versions. Cheers.”

The story was spotted by freelance journalist Nick Monroe. A user replied to his tweet on the subject with a screengrab from BioShock Remastered, apparently proving the easter egg exists:

BioShock had a rough development, marked by tensions within Ken Levine’s team at Irrational Games and between Irrational and their publishers, 2K Games. According to this expose by Eurogamer, lead designer Paul Hellquist was “increasingly shut out of key meetings”as the game neared completion, tensions ran high, and hours ran late. Hellquist left Irrational shortly after BioShock was finished.