A decade on from its original release, BioShock is firmly cemented in the library of All Time Greats. Thanks to its beautiful environment design and philosophical musings on control, identity, and Objectivism, Irrational’s flagship title won’t soon be forgotten. But we shouldn’t place all our focus on those lofty elements. BioShock is also an incredible work of body horror.

BioShock 2 DLC Minerva’s Den is one of the best ways to experience the series’ heady mix of art deco architecture and grisly body horror. Here’s why.

BioShock is oft described as ‘creepy’, but the term is quickly swept under the rug in order to make way for discussion about that sequence and how it challenges conceptions of player agency, or those characters who demonstrate the failures of self-interest. But the foundations of these stories – and, indeed, many of the major structural supports – are all built on horror. Rapture is a terrifying place; full of decay, dark shadows, and howling voices. It’s the ultimate haunted house, with each gilded bulkhead sliding aside to reveal yet another trial of terror.

But while the groaning, leaking world of Rapture continually threatens to collapse and drown you, it’s a more immediate form of horror that BioShock absolutely excels at. The game is a body horror the likes of which David Cronenberg would be proud. Not a single piece of flesh goes unscathed. 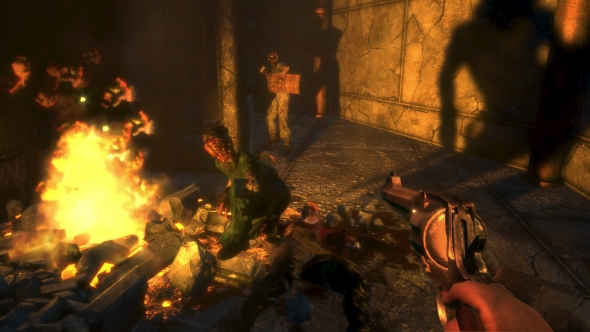 Your enemies, the Splicers, are mangled and mutilated, with melted skin and festering wounds. Their masquerade masks cover faces that sport tumours and collapsed noses. Their joints are broken backwards, weapons clasped by elongated fingers that curl around meathooks and triggers. It’s not just their physical bodies that have been deformed, either; their guttural cries and barely-logical chatter are indicative of minds on the brink of total collapse.

Facing the Splicers is pretty terrifying, but the real horror is in how they’re a potential reflection of your future self. Their biological degradation is caused by the extensive use of gene-altering Plasmids; an addictive drug that you must experiment with in order to further your own journey. Continual use of the magic-like abilities the Plasmids grant requires you to repeatedly plunge syringes into your arm, causing bolts of lightning to sear through your veins, and your skin to tear open as hornets burrow and nest within your flesh. The animations – especially upon first use of a Plasmid – really emphasise the gory pain you’re inflicting on yourself. The icicles that burst through the back of your hand when switching to Winter Blast, each frigid penetration causing a rivulet of blood, makes me flinch every time. 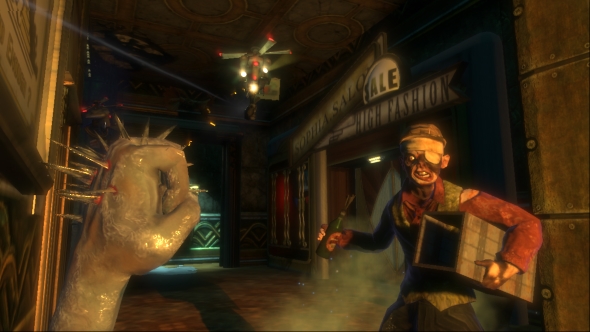 The deeper you dive into Rapture’s past, the more you come to realise that everything lies within the mutilation of human flesh. While the creepy child cliche is certainly used effectively with the Little Sisters, it’s the truth of their situation that’s likely to leave you feeling uncomfortable. These sallow-skinned little girls are merely organic incubators for sea slugs that generate ADAM, the material required to create Plasmids. These children were intended to be placed in a vegetative state, but Rapture’s scientists discovered the slugs produced far more ADAM when the hosts were conscious. Just thinking about having a huge slug stitched into your guts is enough to give you shivers for days, but inflicting such a thing on a helpless child is the touch that makes it really grisly.

If the story of the Little Sisters wasn’t depressingly grotesque enough, consider their Big Daddy protectors. Rather than mechanical automatons, there are real people trapped inside those diving suits. Well, what’s left of them, anyway. These poor subjects had their skin and organs fused to the armour plating, literally imprisoning them within the suit. It is all our worst nightmares of claustrophobia and biological experimentation made flesh – and, indeed, brass.

With so much of BioShock’s lore and design based in the disfiguration of the human body, it’s no surprise that some of its greatest moments revolve around surgery and medical malpractice. Its most famous jumpscare, the dentist, is a pretty basic exercise in jittery level design, but it’s heightened by the discomfort of being set in an area associated with wrenching teeth from your jawbones. There has always been an uncomfortable link between the surgical mask and our fear of things going painfully wrong, so it’s no surprise that the leering blood-soaked orthodontist is one of BioShock’s most effective frights. 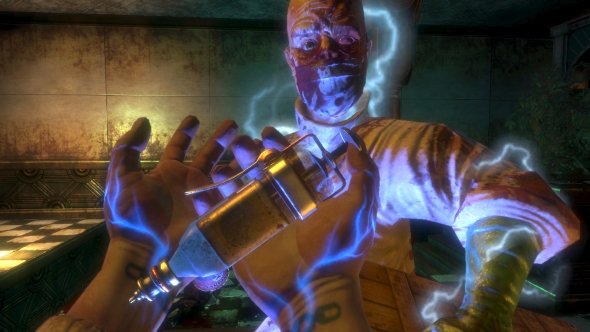 My personal favourite, however, is Steinman the plastic surgeon. As you creep into his surgery, you observe him repeatedly stabbing a (still conscious) woman on his operating table while screaming of his past failures. “They always turn out wrong!” he wails. As he lists them – too fat, too tall, too symmetrical – lamps illuminate the corpses of his past work hanging from the ceiling. When he finally catches sight of you, he proceeds to haphazardly fire a Tommy gun while demanding that you look in a mirror. There’s a genuine fear to be found in the idea of medical procedures scarring us for life, and Steinman is the living embodiment of that nightmare.

It’s easy to be defensive about games and their perception in the wider public eye, which I feel is part of the reason why we always champion BioShock and its philosophical elements. All those Ayn Rand discussions make the game seem ‘legitimate’. But it’s worth remembering that horror is a difficult genre; generating terror and discomfort is a subtle art that should be admired. That BioShock’s body horror can truly get under our skin is one of its greatest achievements, especially ten years after it came out – that’s something we shouldn’t brush aside simply because it doesn’t appear ‘lofty’ enough.