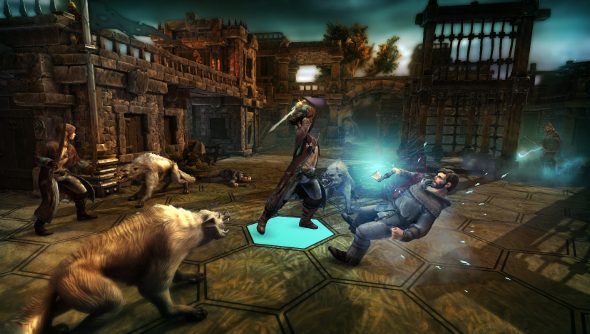 Flung in a dungeon by a thoroughly unpleasant husband, body filled with disfiguring spider venom and sanity dwindling – what’s a lady to do? For starters, how about conquering the world? Blackguards 2’s understandably angry protagonist, Cassia, propels Daedalic’s tactical RPG forward with admirable bloodlust. She’s the first in a string of improvements that raise it above its predecessor.

All of the first game’s highs – the intricate, extremely interactive maps most notably – return, but Blackguards 2 is a slicker, more confident RPG. Where the original meandered, its sequel is blessed with greater purpose and direction. And it manages to fulfil a promise the last game made, but never quite fulfilled: you can play the villain from the get-go. 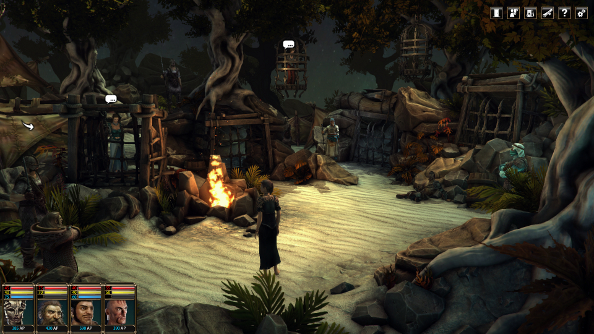 Cassia would be, in most games, an antagonist. A sympathetic one, certainly, but one that still needs to be defeated or, at least, stopped. In Blackguards 2, she’s as close as you’ll get to a hero. Driven mad by her time in her husband’s labyrinthine dungeon, Cassia escapes with thoughts of conquest filling her mind. She doesn’t just want revenge, she wants to rule. But since her husband is a nasty pantomime villain, she’s who you’ll be rooting for.

To take the kingdom for herself, she needs allies, an army and to squash the mines, towns and villages of the land – the source of its infrastructure – under her foot. The allies are made up from the not-quite-heroes from the first Blackguards, all worse for wear, while her army is made up from brutal mercenaries, rescued by her hand.

The quest, then, is to go from town to town, beating up soldiers and monsters on hex maps. Each of these battlefields feel like they’re given equal attention, littered with quirks, obstacles and traps. And they’re an aesthetically diverse bunch, from the swamp lair of a wizard, dark and dingy, pockmarked with pools of flammable gas, to heavily fortified castles, with thick imposing walls and high windows where archers pepper combatants with arrows. 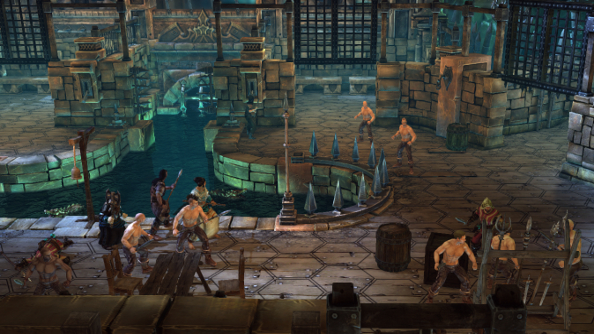 Satisfyingly interactive, Blackguard 2’s maps are more than just simple combat arenas. They are generously full of explosive barrels, destructible cover, mechanical contraptions and magical thingymajigs. While victory can be achieved through might and positioning, it’s likely to come a lot swifter through domination of the map, using it as an extra weapon.

Foes aren’t stupid enough to let Cassia and her allies fiddle around with all of these levers and barrels without attempting to do the same, though. Occasionally they’re capable of using their environment to devastating effect. Sometimes they’ll just knock over some crates and pin you under them, which is less traumatic, but it’s still rather embarrassing.

They’re not idiots, but the AI only rarely poses much of a challenge on the default difficulty. Mages can wipe out entire groups of soldiers in one attack, and they make up the majority of foes. Flying insectoids, bone monsters and imposing sand creatures can be a bit trickier to deal with, especially when first encountered and still able to surprise, but there’s usually a lot of chaff to cut through to get to the more fulfilling confrontations. It’s through numbers alone that foes really become threats, but that can threaten to make the fights start to feel like a slog. Though it’s rare that a map doesn’t have something that can make a battle interesting. 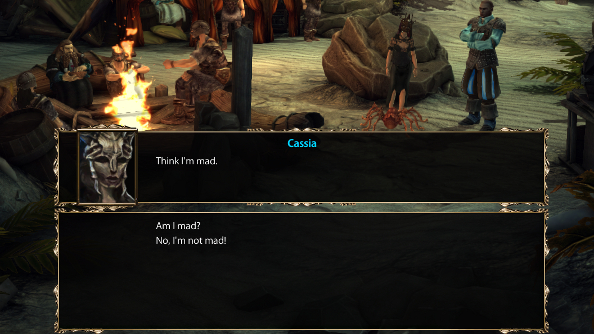 Getting to know the ins and outs of a map is enjoyably experimental, with the game gently encouraging you to pull on every lever and use every winch. I spent an entire battle attempting to coral enemies into particular spots so that my allies, waiting by a pair of cranes, could drop massive palettes filled with crates onto their heads. When a plan works out, it’s like watching a Rube Goldberg device working its magic.

Sometimes, a plan doesn’t quite work, however. I confess that I caused more than a few broken bones when commanding minions to shower enemies in boulders, but really, it didn’t look like any rocks would hit my soldiers when I told them to do it. Sorry, guys.

These aforementioned minions are split into two types: heroes and mercenaries. The heroes, a great big bloody misnomer, are tougher, gain experience and special skills, and are fleshed out characters with their own reasons for joining Cassia on her mad quest. You can have a natter with them at camp, upgrade and tweak them, and use them to interrogate prisoners by exploiting their fears and weaknesses. 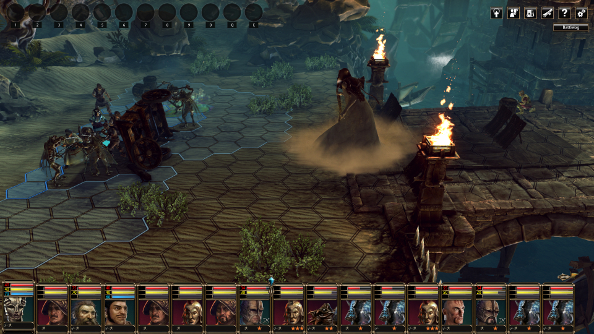 A handy bunch though they might be, I never could get invested in their own personal stories. They are a bit more contemplative than they were in the first game, and since we jump into their stories in media res, there’s a bit more flesh on their individual narratives’ bones. But they’re still supremely unlikable, and now very mopey. You’ve got your moody dwarf, your depressed mage, your stoic, suicidal warrior – they’re a miserable bunch. Good people to have around in a brawl, though, and they can be grown into an extremely tough gang of ne’er-do-wells.

Character sheets are saturated in numbers and statistics. There is still a vast array of pools to pour ability points into, ranging from spells to weapon-specific skills, and each character can go down several different paths. They do, however, join Cassia with skills already learned, nudging them down broad routes.

Cassia, on the other hand, can be whatever she wants. I ended up making her a damage-dealing mage with a predilection for finishing off enemies with a very sharp sword. Charging into battle, spewing fire and frost, carving down anyone who gets to close – it matches her personality quite well. 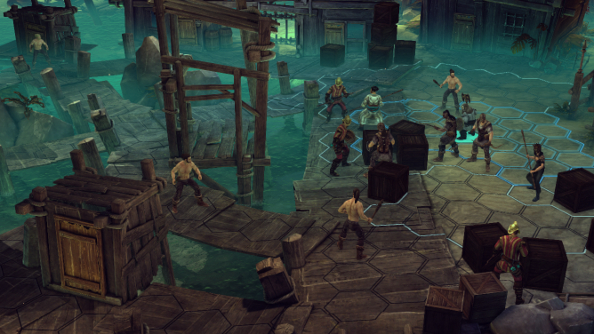 Mercenaries are the disposable pawns of Cassia’s forces. Unlike heroes, they can’t be levelled up directly, instead progressing via the conquest of settlements. Each node on Blackguards 2’s map confers bonuses when the silver spider banner – Cassia’s banner – hangs over it.

New items for the merchant to sell, persistent buffs offering resistances against the elements and other threats, prisoners to interrogate – every node has something to encourage conquest. And some of them increase the veterancy of the mercenary warriors, making them hardier, deadlier and giving them a few tricks. At first, only archers, pikemen and swordsmen can be used, but victory on specific maps unlocks new classes, like mages and assassins, so that, eventually, an extremely diverse force can be fielded.

These hired troops can join the hero units in battle, and some fights also get mercenary reinforcements. They can hold their own in a scrap, but unlike the heroes, when they lose all of their health, that’s them done for, just a corpse on the battlefield. Cassia and her VIP chums have to bleed out before they are removed from battle. None of this is permanent, though. There are limitless mercenaries waiting to throw themselves on swords or into monstrous maws, and as long as one hero is standing at the end of the fight, all of the others survive to tell tall tales about it. 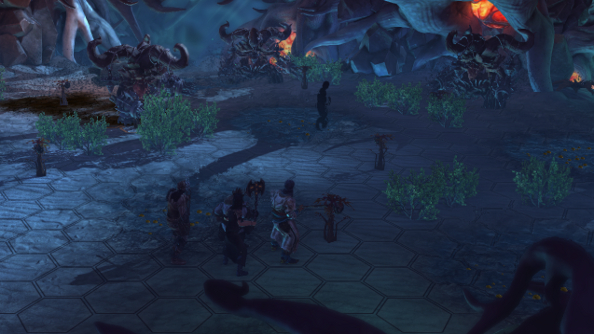 After every third battle, a little road bump get in the way of Cassia’s plans for domination. Her husband sends troops to take back one of the regions she pinched. Unless that also happens to be where she and her main force is, it’s up to the mercenaries to hold the area. If it’s lost, then the bonuses go out the window.

Since the turn-based fights are quite long, playing on a map that’s already been conquered is a wee bit repetitive, but the fight itself obviously doesn’t play out in the same way, and the maps themselves are so well crafted that a repeat visit is not really a chore.

When you split up Blackguards 2’s RPG and tactical elements and put them on the scales, it’s clear that it’s more of a tactical game than an RPG. It’s mostly found in character progression, but the game also dabbles in a spot of moral choice. Cassia’s a bit deranged, but she’s not necessarily evil. That’s left very much up to the player, but her allies also attempt to influence her. 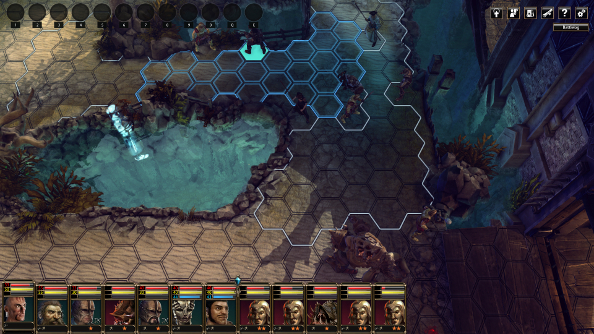 Cruel interrogations, executions, whole villages put to the sword – these are all optional. Her madness can be embraced, or her thirst for power, or she can try to be more just than her husband. Pragmatism is a choice, as well. If an ally feels that it’s necessary to slaughter a bunch of terrified fishermen, then you can always let them. Okay, that’s still more evil that pragmatic.

Blackguards 2 has surprised me. Though I enjoyed the tactical combat in its predecessor, I wasn’t left hungry for a second outing. But the more focused campaign, and a protagonist that is much more than a cardboard cut out have elevated the sequel considerably. Some slightly awkward writing and odd moments of jarring silliness weaken the grim premise, but not enough to topple it. And the immensely satisfying fights are more than worth putting up with some cracks.