Fancy a Titan RTX but don’t want to shell out $2,500 for the privilege? Blade has announced it is equipping its Shadow cloud gaming service with ray tracing chops courtesy of Nvidia’s top RTX-branded GPU, offering the very best in 4K ray-traced gaming beamed directly to your device.

Over at an event in Paris, Blade announced a new three tier system for its game streaming service, Shadow. At the top lies “Infinite.” The top tier of subscription, Infinite will deliver 4K gaming courtesy of a Titan RTX for 40 (€40) – the best of the best graphics cards. The “Ultra” package below includes an RTX 2080 (or equivalent) GPU, and, priced at £25 (€25), it is hoping to make ray tracing just a little more accessible.

That ostensibly means a free upgrade for current Shadow subscription holders, whose €30 monthly payment will soon see their GTX 1080 replaced with an RTX 2080 at a partial discount. Meanwhile, if you fancy cost-cutting, Blade is introducing “Boost,” an entry-level tier that will retain much of the same configuration as the current subscription for £13 (€13).

All new tiers are set to launch in February 2020, and pre-orders are reportedly set to go live at any moment.

The Infinite package will also see a step-up to a six-core CPU (or equivalent through server magic), 32GB of RAM, and 1TB of storage.

Blade Shadow is a cloud gaming service that offers a fully-fledged gaming PC up in the cloud. Where it and many other streaming services differ is that Shadow offers its customers an instance of a gaming PC, with access to all the same launchers, apps, and services as any local machine. 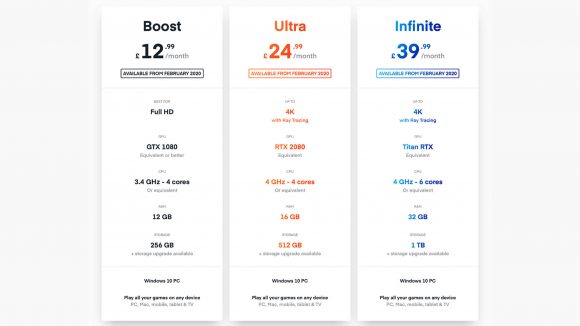 This means, beyond the subscription for the service, players have the ability to play their existing gaming libraries – whether that be on Steam, Epic Games Store, Origin, or wherever you own your favourite titles.

Blade’s announcement comes just a few weeks shy of Google Stadia’s initial launch. Undoubtedly Shadow wanted to make a big splash just beforehand and remind everyone, as its co-founder once told us, that “Google definitely isn’t the only one rushing to cloud gaming.”