In a room sometimes used as a motion capture stage, a recent build of Bleeding Edge is waiting to be played. The venue is Ninja Theory’s Cambridge studio, and a good number of the game’s development team are gathered round as a hands-on session is readied.

Introducing Bleeding Edge, creative director Rahni Tucker immediately describes it as a fighting game. It’s a little unexpected. By traditional gaming parlance, a ‘fighting game’ refers to the likes of Street Fighter, Tekken, and Garou: Mark of the Wolves. Details about Bleeding Edge have been in short supply until now, but still, nobody in the room is expecting a traditional brawler that commits to the arcade form. After all, it’s also been described previously as an arena-based team battler.

Certainly, the game’s character select screen looks like it could be from a purebred fighting game. There’s a diverse and vibrant range of combatants that wouldn’t look out of place in SNK’s eclectic fighter Darkstalkers, and a colourful palette with all the punch common to games that try to lure arcade visitors to a given cabinet. Of course, Ninja Theory has a considerable heritage making a different kind of melee-focused action game, from Heavenly Sword to Hellblade via Enslaved and DmC. So what kind of fighting game is Bleeding Edge?

“It’s been hard to find the right words to help people understand where it sits, because it is – in my opinion – a little bit different to everything else,” Tucker offers. “And it is a passion project. We started the game because we at the studio like – and are good at – making third-person action games. And then me personally as creative director – and also a lot of the guys on the team – really like playing online competitive games. So it was a combination of two passions, and we have been really inspired by a lot of the games that we like to play.” 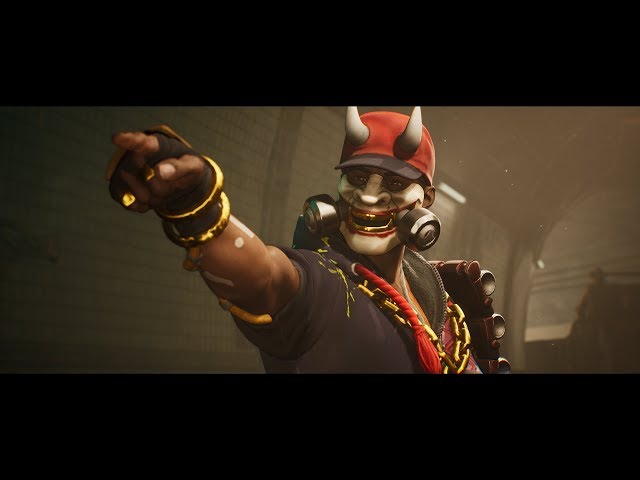 And that is just what Bleeding Edge is. It’s a team-based online multiplayer game focused largely on melee combat, which is heavily informed by Ninja Theory’s earlier efforts with third-person action brawlers. There’s also significant influence from traditional fighters, with the team having analysed arcade game design conventions around the likes of hitboxes, frame use, and the interplay of different combos. Overwatch is another clear inspiration, and you could reasonably describe Bleeding Edge as something of an action-MOBA, even if it isn’t a MOBA in the strictest sense.

For more competition: the best multiplayer games on PC

As for how it actually plays, Bleeding Edge pits two teams of four against one another in relatively large, open arenas. Game modes will see you scrapping over area possession or collecting and cashing in items scattered across the map for points, but whichever you’re playing, the game is about picking a well-balanced team and communicating together as clearly as you can. Because in the midst of the melee, things can get very hectic indeed. 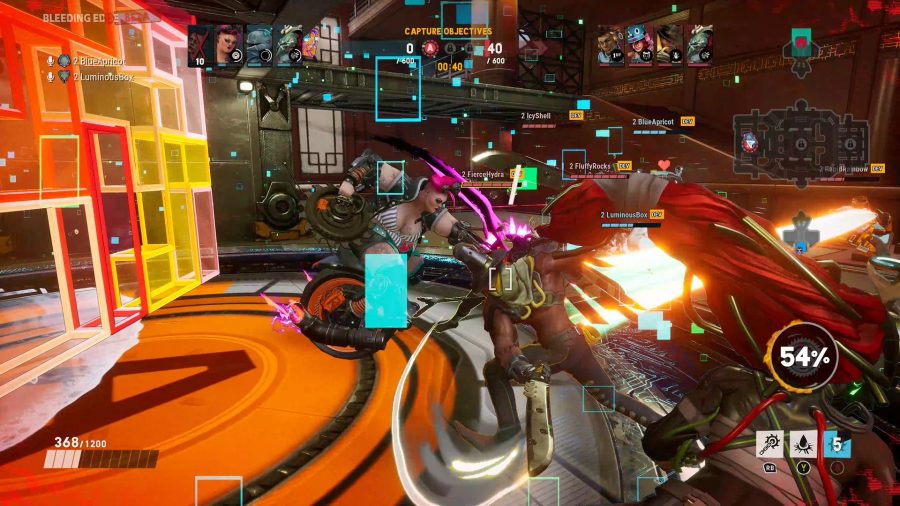 Going in with a tank, a healer, an agile melee character, and one of the few cast members with some ranged weapons appeared to be the best bet, but there is a lot yet to explore in terms of strategies and approaches. For one, there are numerous special abilities conceived to interact with each other in wildly different ways.

A League of its own?

Bleeding Edge isn’t just inspired by MOBAs, “it started out as a MOBA,” confirms its lead designer Gerald Poon. “We had things like towers and lanes and minions. At one stage it was a 6v6 game, and at another stage a 3v3 game.” It turns out Bleeding Edge has been many more things than the game it is today.

Being lucky enough to have not one but two of the game’s developers on our team, we could clearly see a lot of headroom for high-level, meticulous play. But at the same time we had plenty of moments where we felt a shade lost to the chaos. Fortunately, that ebbed away with each new round played – a process helped along by the controls and combo systems, which are a good deal simpler than those seen in traditional fighting games.

After tackling several rounds across a handful of maps – including the newly revealed Landslide – location, it’s clear that as much as Bleeding Edge is a highly competitive game, it’s also a joyful, playful experience. As well as having a knack for delivering tantalisingly close finishes and energetic reversals of fortune mid-battle, it excels at producing explosions of laughter and jocular exasperation. 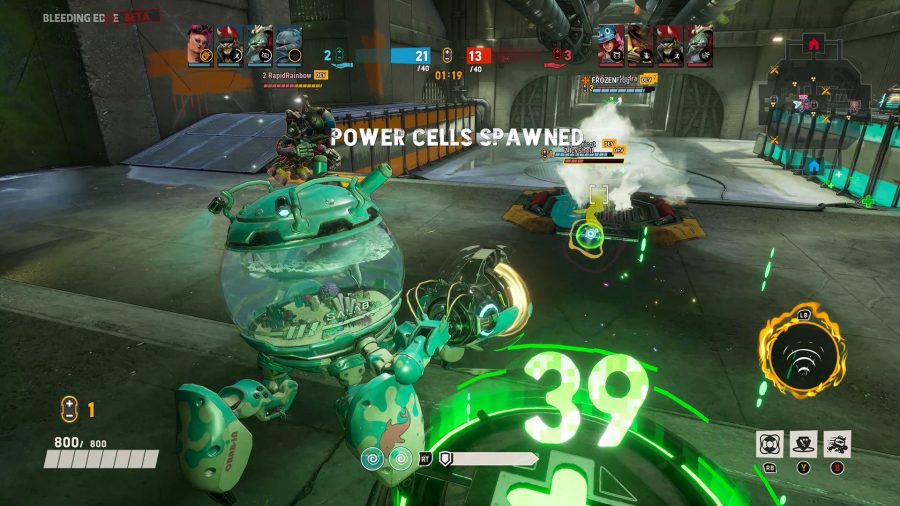 Thanks to a bold colour palette, eccentric cast, and energetic, even mischievous, tone, Bleeding Edge keeps the spirit of the fight light, even when the gameplay reaches its most nail-biting. Frankly, it’s fun even when you’re failing. That, says Tucker, is in part a deliberate attempt to offer a distinct atmosphere when it comes to online play.

The culture in online games can be a little toxic and we were like: why does it have to be like that?

“Personally I sometimes find the culture in online games can be a little toxic and a little angry and we were like: ‘why does it have to be like that?’” Tucker explains. “We realised we could make a game that celebrates competition in the way that you would go with a bunch of your mates and play footie in the park, where you’re against each other while you’re playing, but then you’re going to go and have a beer after. So we thought we should make this about being friendly, enjoyable, and playful. The whole thing’s a little bit tongue-in-cheek. It’s meant to be fun, right? It’s not meant to make people angry. That’s the kind of community that we want to help.”

Indeed, Bleeding Edge appears to be plentifully fun. And yet there’s ample capacity for high-level play and assertive competitiveness. If Tucker and her colleagues can match that with a friendly, playful community, then Bleeding Edge may tempt the vast numbers who aren’t so keen on the more aggressive, hard-nosed competitive gaming options. Of course, combining the spirit of a kick-around down the park with the competitive drama of the Premier League is easier said than done. 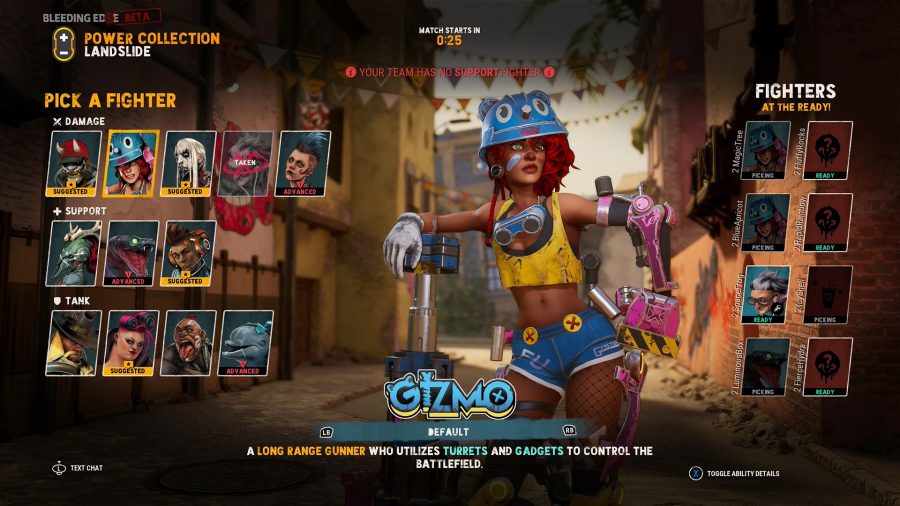 Returning to Bleeding Edge’s aesthetic in the broadest sense, it’s certainly a rich feast. The arenas are packed with detail that makes them engrossing places to occupy, while the audio and animation do what they can to cement readability of action even when the scrapping is particularly frenetic. It’s striking how often a sound from behind you or a sense of a rival character’s walk animation communicates the broader battle dynamic to you.

Ultimately, Bleeding Edge – an Overwatch-influenced MOBA-like team-based fighting game with a whiff of its arcade-based forebears and a heavy dollop of Heavenly Sword – still has a lot to prove out in the wild; and may need a snappier genre description.

This is a game that needs to fill much more than a few short hours of hands-on time by new players. To dazzle, Bleeding Edge must engender a bounty of playstyles and team dynamics, minimise any sense of repetitiveness, and offer balance that lasts even as elements are reinvigorated and evolved through updates.

For more shootybangs: see the best FPS games on PC

If it can be all of those things – and maintain a friendly, playful community – it might just be something rather special.