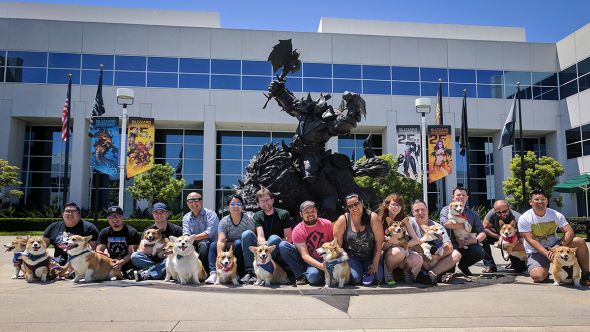 It turns out the Blizzard campus in Irvine, California is full of the staff’s pets. In an article released yesterday, the developers revealed that many of their staff regularly bring their furry friends to work with them, helping form an important part of the Blizzard team.

There are reportedly over 750 pets registered at the Blizzard offices, and around 50% of those are regular visitors to the campus. That total includes more than 700 dogs, 36 cats, five bunnies, four Aquariums, and a single turtle. While they’re not explicitly mentioned in the article, Chadd Nervig, a technical game designer on World of Warcraft, has also tweeted to say he’s seen two birds and spider on campus, and that one of his colleagues is planning to bring in their snake.

One of my officemates has a snek, and he's planning to bring her in soon!

To avoid the potential chaos of several hundred dogs running around the office, the company has some basic rules in place. For one, the pets have to be registered, and they have to be in an environment suitable for them, where everyone in the office is comfortable having them around. All the pets need to be fully trained, licensed and vaccinated, and, of course, aren’t allowed in the kitchens or cafe. Registered pets are also required to sign non-disclosure agreements, using pawprints to confirm they won’t pass along any secrets about the games Blizzard is working on.

If you’d like a closer look at some of the Blizzard pets, help is at hand in the form of the Blizzard Office pack, with photos of more than 100 of the finest canines to grace Blizzard’s offices.