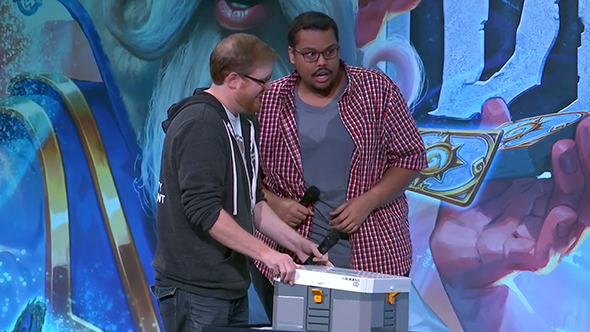 Forget the new WoW expansion or vanilla servers. Forget about Moira and Blizzardworld. Forget new Hearthstone cards. You’ve even gotta forget StarCraft 2 going free-to-play. The real big news at BlizzCon was the revelation of what would be inside a giant loot box.

None of them were giant, but you can check out our findings from opening 50 loot boxes on the Overwatch PTR.

The BlizzCon schedule announced a panel called “What’s in the Loot Box?” (Presumably this was before the internet collectively got very angry about loot boxes.) We had no idea what the panel was. Neither, it seems, did most of the people on the panel. Community manager Josh Engen promised it would be very silly, and probably a big waste of time. On that point, at least, they delivered.

Perhaps the most telling part of the panel was that the actual giant loot box got held up in customs, so the panel spent half an hour looking at a tiny loot box while imagining what was to be inside a giant one. Look, it was late in the day. Everyone was punchy. It was a nice way to unwind.

It was YouTuber Stylosa dressed up as the spray of punch kid from the first Overwatch short. Why? I don’t know. You don’t know. Nobody on the panel knew. We will never know. Nobody who attended or watched that panel will ever receive that thirty minutes of their life back. Well played, Blizzard.

So about that giant loot box lol…