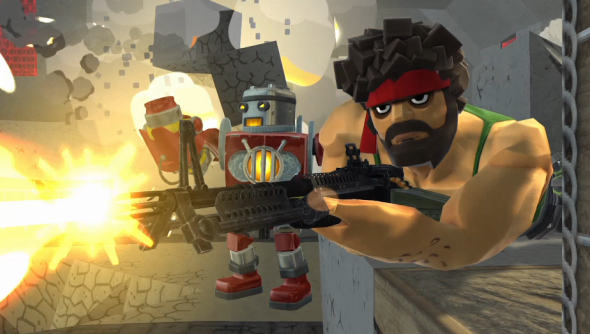 Block’n’Load’s different. It is a game built from the same voxels that power Minecraft’s destructible terrain, reinforced by the mechanics of class-based shooter as Team Fortress 2.

Block’n’Load’s equal parts creation and destruction: you split your time between building ingenious traps and charging into the enemy base pouring bullets and rockets onto their defences like a heavily-armed or tornado.

It’s out today. Here’s why you should play it.

If you’ve played Team Fortress 2 you’ll already be familiar with Block’n’Load’s core mechanics: it’s a team-based first-person shooter with a clutch of different character classes to choose from.

At the extreme ends of each map are power cores, one for your team and one for the enemies’. The aim of each match is to destroy the enemy team’s power core while defending your own. They’re hard to kill, so rush tactics don’t work too well. Instead each match becomes a brutal game of land grabbing.

But wait: you can only kill them after the build phase – where you’ve got a few minutes to construct a block fort and turret gauntlet for your team to fight through.

It is part box-fort building, part fight to the death

In the lobby before the match you can select a small spectrum of block types to build with. These range from construction materials like brick, wood, and steel to active blocks, like landmines, spikes, and mobile spawn points.

You’ve five minutes from when you first get into the match to build defenses. A map-spanning forcefield runs through the centre of the map, splitting it in two, so you can’t see what the other team are working on.

This is where Block’n’Load’s voxels come into their own. Players set to work building defences, anything from a vast, sky scraping wall to keep their opponents at bay, stacking concrete blocks five layers thick to bolster it against explosive attacks, to a tunnel system filled with spike pits and concealed land mines.

You can combine the active blocks to create cruel traps and genius inventions. For instance, by laying a speed block in front of a jump pad, players can launch themselves over the map like a cannon ball. This can be used to reach the enemies’ base or, as I saw one devious player do, laid out in the entrances of your own base to launch unwary invading enemy players to their death off the side of the map.

Another specialist block acts as a solid for friendly players but enemy players can pass straight through it, perfect for covering a pit of spikes.

It calls out to your inner troll

Block’n’Load gives you the power to be an utter monster. An opportunity many players seize with both hands.

Laying blocks has a cost, pulled from a personal resource pool. To replenish it you’ll need to break down blocks with your melee weapon. So, as you build fortifications on the front line, your team will be tearing down the terrain elsewhere on the map.

After the five minutes are up the forcefield comes down and you have a moment to admire what your enemy has built before charging against it like a cartoon-coloured version of the D-Day beach landings. 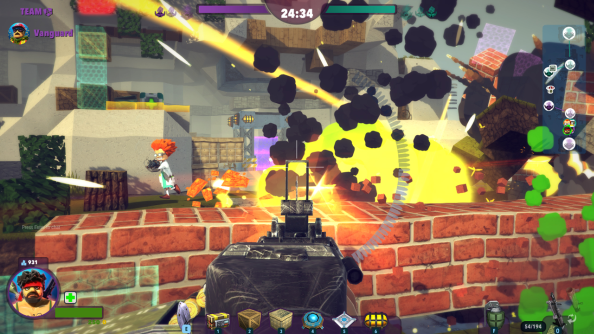 The characters are ridiculous

When Block’n’Load started its beta in December it already had six different character classes to choose from. There was a sniper, an engineer, a healer, a glass cannon, a heavy, and a toy robot with a minigun for an arm. Each class have their own weapons, active and passive ability, special block, and stats, pushing them towards different styles of play.

Cogwheel, for instance, is essentially a walking tank. His main weapon is a minigun which can fire 300 rounds before reloading, his secondary weapon is an explosive-firing cannon, and his special block is a fixed mortar. If you can get together the resources, you can place six mortars around the map and order them all to fire on a single spot. These high-powered shells can level your enemies’s fortifications with little trouble so Cogwheel can become a powerful figure to have at the front of an assault.

Tony’s very similar to TF2’s engineer in that he gets a passive buff to his repair ability and his special block is an automated turret with a 360 degree firing arc. He’s even got a shotgun as his main weapon. The changeable nature of Block’n’Load’s battlefield does alter Tony’s role a little – Tony can build blocks faster than any other class so whether in defence or constructing sky bridges to mount an assault on the enemy he’s an effective companion.

The other classes all have their particular roles – O.P. Juan Shinobi is a glass cannon, able to scale block walls as though they were ladders and cause a lot of damage with his katana; ‘Doc’ Eliza Doolally can both act as a support, healing herself and her teammates, and an AoE attacker, using gas grenades to damage crowds of enemies; ‘Sarge’ Stone is a more mobile attacker the Cogwheel, mowing down enemies with his M60 and regaining health with a passive heal, but not quite as powerful.

The six classes complement each other well, rewarding teams that play the full spread. You could field a team of six Cogwheels but they’d be outmanoeuvred before they could reach the enemy power core. 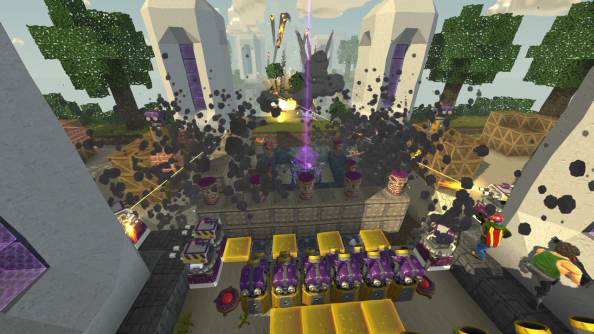 Jagex have learned the lessons of early beta access

Throughout beta, Jagex have frequently added new maps to the server rotation, usually designed to address the most popular tactics in the community. When I spoke with them back in December they said they plan to keep up this momentum after launch, releasing new maps regularly and taking the least played maps out of the official rotation.

Jagex intend to release more than maps, they have plans to create a new batch of six characters multiple times a year. So, within 12 months of Block’n’Load’s launch you should have access to more than 18 characters – each with their own weapon sets, abilities, and special blocks.

Block’n’Load’s a sandbox shooter so the more characters and levels Jagex can pour into the mix the more varied the action will become.

There’s always a worry that a game will become imbalanced when a developer is throwing out new characters and weapons on a regular basis but Jagex have been quick to balance Block’n’Load throughout its beta period.

It’s getting better and better

Between scanning the forums, trawling through data pulled from multiplayer games, and their own internal testing they’ve tried to stop anyone character class from pulling ahead. Shinobi, for instance, was a becoming a favourite of rookie and veteran players alike. He was meant to have a high kill count as his class was built for assault but this was supposed to be balanced out by, due to his puny health pool, a high death count.

However, the stats showed this wasn’t happening.

“We found that a good [O.P. Juan Shinobi] player was a death machine, and that all the new players were propping up his death numbers to even out his K/D/A overall, but realistically OP was a monster,” Jagex wrote in a Steam Update. “What was really making him crazy powerful was the fact he could use his Shuriken alt fire (and fire 3 at once) swap back to his Katana with almost no DPS loss.”

Jagex increased the time it took O.P. to switch weapons and it’s solved the problem, encouraging players to use other classes again.

That’s just one example. Throughout the beta Jagex released patches and new maps every few weeks. Raising the initial offering of just two maps to the current 16. 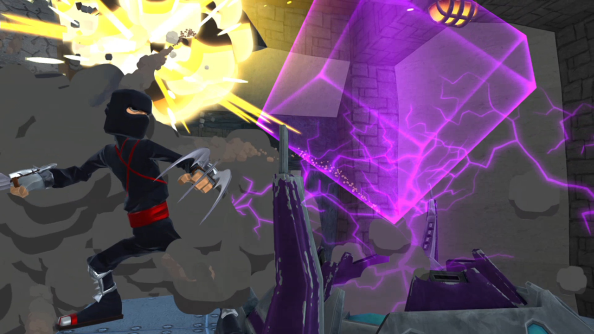 You can play it now!