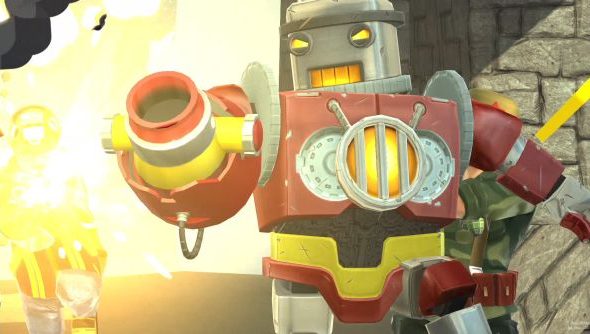 Jagex will release their new team multiplayer FPS, Block N Load, on Steam later today. The game features highly destructive arenas, six different heroes to pick from, and the ability to construct your way to victory.

Jagex will be offering a Steam free weekend, so that anyone can come and try the game without committing their cold hard cash. And for those who do commit, Block N Load will be available at a 15% discount through its launch week.

So what makes Block N Load different from the torrent of other FPS games out there? “We’ve tried to do something different with Block N Load.” said David Solari, vice president of Block N Load. “We wanted to make a game where building is as important as bullets, where smarts are as important as skills, and where players could contribute to their team in their way.

“We can’t wait to see the creativity and invention of those that play Block N Load now that it’s live. Today’s launch is only the beginning. We have a player first mentality, and we look forward to an exciting journey with the players as the game evolves.”

Our dearly missed Jules had a lot of fun with the game in his preview – in it he says it’s “equal parts creation and destruction”. That means you should probably play it this weekend.