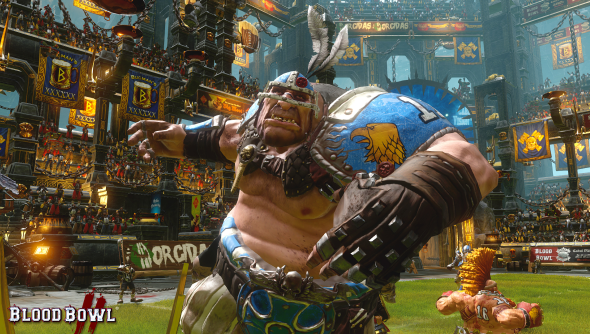 Blood Bowl is the bastard child of American football and an abattoir. The generally accepted aim is for your team of orcs/humans/rat things to score as many touchdowns as you can in 16 turns. But it doesn’t feel like a win unless you’ve killed/mutilated/permanently crippled one of the other team’s players.

Cyanide have made the sequel better in all the right ways: the interface is now comprehensible, you won’t need an 67-page rulebook to hand for each play, and the tackles are more violent than ever before. Limbs will be broken, necks will be snapped, and spleens will be burst.

I think it’s going to be excellent.

Blood Bowl is a deeply tactical game. On the surface it looks like American Football dressed up in Warhammer clothing – both teams try to score touchdowns by getting the ball into the opposition’s endzone – but what sets it apart is its turn-based rules. Each turn you’re countering your opponent’s moves and trying to leave your players in a position that blocks your opponent’s players on the next turn.

Complicating this is the Turnover rule: if at any point one of your players fails a move – if they drop the ball, fail to dodge a tackle, or trip over from running too far – then your turn ends and the other team get to take their go. Turnovers can often happen when you’ve only moved a couple of your players, leaving the rest of your team out of position, and they’re enough to make you pull your hair out.

Blood Bowl’s blend of tactics and risky dice rolls date back to the original board game and Cyanide have kept them exactly the same for Blood Bowl 2. This is both good and bad: Blood Bowl 2 is every bit as detailed as the board game and hasn’t been dumbed down in the transition to our computer screens but that means there’s 67-pages of complex rules, dice-related skills, and race-specific traits to learn.

Cyanide’s first game struggled to teach new players these rules, the tutorial was a scripted match filled with walls of text. Blood Bowl 2’s thrown that out in favour of a story campaign. Over 15 games you’ll be introduced to mechanics until you’re playing with the full ruleset. 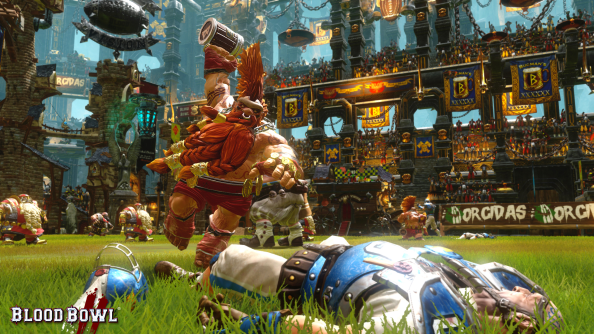 The campaign match I was shown saw a goblin cameraman crash his gyrocopter into the pitch, creating a permanent obstacle. If you pushed any players into the burning wreck they’d be scalded or, potentially, burnt to a crisp.

Gone, too, is Blood Bowl’s incomprehensible interface. Cyanide have replaced obscure icons indicating different types of dice roll (all of which needed to be learned from the rulebook) in favour of a simple percentage score. You can now tell the chance of a play succeeding at a glance. If they’d prefer it, purists can switch to the old icon interface.

All these improvements mean you can get down to the business of Blood Bowl, which in Blood Bowl 2, looks marvellous.

Cyanide’s made the best looking Warhammer game I’ve seen. (And this is in the same month I saw the stunning Battlefleet Gothic: Armada). Every race they showed me was as colourful and detailed as the tabletop miniatures. The animation is top-notch, too. At one point the Gauthier Brunet, Blood Bowl 2’s project manager, attacked a Skaven player with a Dwarf Blitzer. The Dwarf, a stocky, tubby fellow, puffed his chest out, jogged over to the rat and cracked him over the head with a beer tankard. It was a thing of beauty. Bloody, bone-cracking beauty.

The looks continue off the pitch: stadiums are packed with cheering fans holding up banners for their teams, cheerleaders ring the pitch trying to distract the opposition’s team, and wizards stand on the sideline preparing fireballs to fling into the central scrum.

Cyanide now let you buy and upgrade stadiums for online games. Increasing a stadium’s capacity nets you higher winnings in matches, whereas replacing the grass with astrogranite means players knocked to the ground have a higher chance of being injured. Alternatively, you can invest in a Bloodweiser beer stand who’ll get the crowd so drunk they’ll pounce on any player knocked off the pitch. 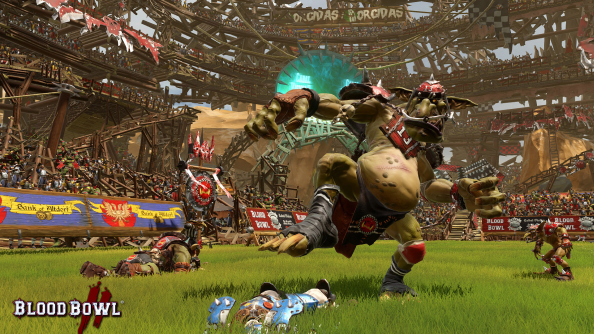 A weakness to Blood Bowl’s AI was it played largely the same no matter what race it controlled. It would get hold of the ball, surround the carrier with players, and try to turtle towards your endzone. That was a great tactic for the slow, violent Dwarves, who were practically a steamroller once in a turtle, but Skaven teams rely on speed, not strength. Blood Bowl 2’s AI adapts to which race it’s playing. The Amazons will try to dodge players past your defensive line and then toss the ball up the pitch to them, Orcs won’t bother with dodging and just punch your players in the face instead, and Dark Elves? Let’s just say you don’t want any of your team knocked down around those vicious, fouling bastards.

Since it launched back in 2009, there’s been more than 6,000,000 Blood Bowl multiplayer matches. Which is stunning when you consider navigating the lobby practically required a map, compass, and friendly deity. Before you could play a game against a friend you’d need to register an account, create a team, start a league, find another two people to fill out the minimum numbers, make a blood sacrifice, define the league format, assign a coach to the teams, plant some magic beans, and then, finally, play. In Blood Bowl 2 you right-click your friends name and start a friendly match.

If you want to make a private league for 20 teams which runs over multiple seasons with each season ending in a championship cup match and a transfer period running in the interim period you can do that. You can define optional rules, like whether teams can hire star players as ringers, wizards to blast the pitch with fireballs, or Bloodweiser Babes to motivate their players. League managers can also control the stadiums, choosing what upgrades, if any, are used.

Cyanide’s trying to make Blood Bowl 2 the most open and accessible Blood Bowl yet without shaving off a hair of its depth and intelligence.

From what I’ve seen it’s succeeded.