Blood Bowl is back, baby! Well, sort of. Blood Bowl 3 is actually out next year – February 22 to be exact – but the fine folks at Cyanide are letting dedicated fantasy sports fans enter the stadium before the previous teams have even been scraped off the astrogranite via early access this September. Can’t wait that long? No worries. Closed Beta testing starts today, and you can sign up here. It’s somewhat limited, so best get signed up sooner rather than later.

Meanwhile, my Black Orc team (Da Krumpmeisters) have spent the last few days headbutting Imperial Nobles and snapping the limbs from satisfyingly fragile Elves, and I’m here to tell you all about it.

As you may know, Blood Bowl 3 is an adaptation of Games Workshop’s 2020 edition of the Blood Bowl tabletop game. As far as rules changes go, they range from the small (‘Going For It’ is now called ‘Rushing’), to the potentially game changing (you can now blow all your team re-rolls in a single, glorious turn). Here’s a useful overview. Altogether, Blood Bowl is cleaner, more characterful, and the passing game is fleshed with a brand new stat. Blood Bowl 3 aims to capture this as faithfully as 2 did the game’s 2016 edition.

As a digital adaptation, Blood Bowl has two major things going for it: convenience and presentation. Tabletop is lovely, tactile, and granular, but it can also be a major hassle, especially when it comes to finding IRL opponents during These Trying Times™. 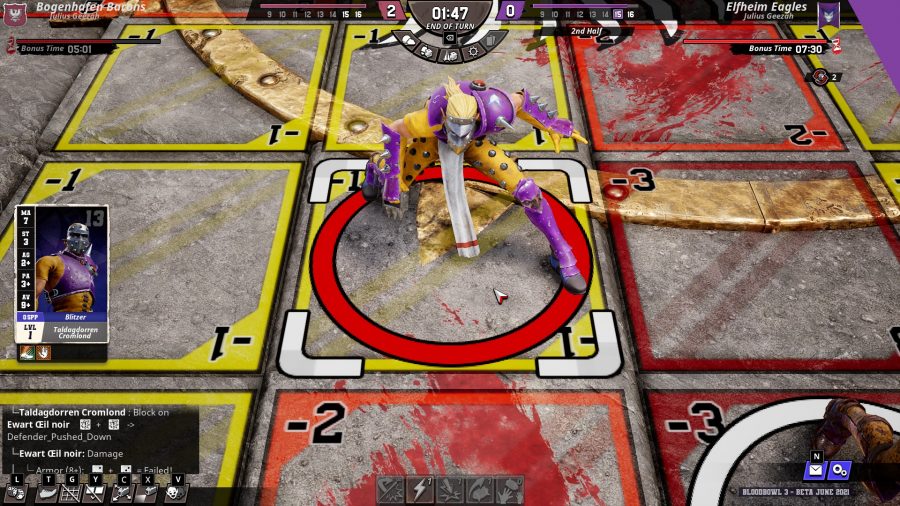 Also, you have to rely on your stupid brain for all the squishy bits. As such, Cyanide is leaning into the game’s trademark chaos. Punches, gore, goblins wearing spiked boots jumping up and down on unconscious elves, that sort of thing.

It’s not all pitch perfect on the pitch just yet, but it absolutely doesn’t need to be

While the beta does feature a few of the visual hiccups that come with the territory for an early build, Blood Bowl 3 is shaping up to be a real looker. It’s less saturated and cartoony than 2: a touch more muted, but also more detailed. New team customisation options let you choose from named Citadel paint colours, and that classic Games Workshop grimdark Nuln-oil style with chipped, highlighted edges keeps things both gritty and vibrant.

I’m a huge fan of the amount of fine detail on the new Black Orc and Imperial Nobility miniatures, and it’s evident from these sharp character models that Cyanide are too.

Bloodthirsty commentators Jim and Bob make a return, although I swear I’d heard all their lines after about 20 minutes. More variety, please! Thankfully, you can safely ignore them over the sounds of bone crunching, because successful blocks sound (and look!) great here. Animation lengths are briefer and thus less intrusive. 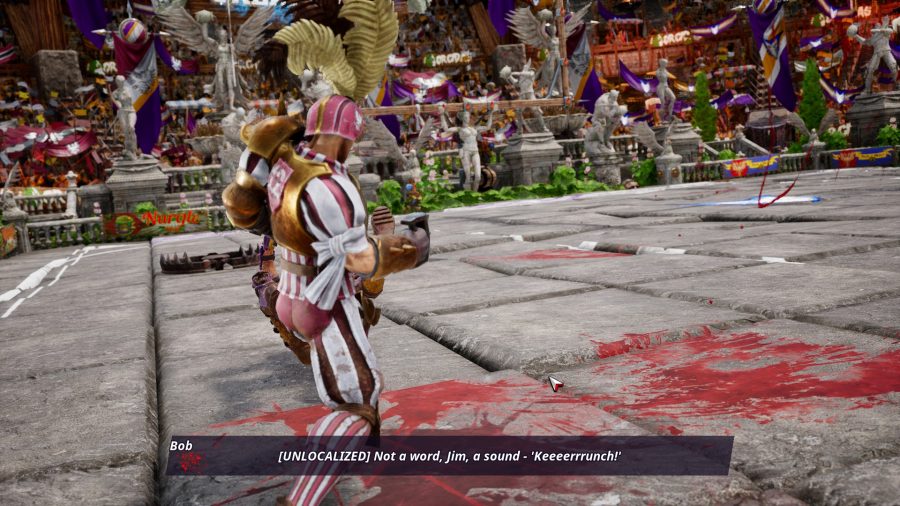 The sheer impact made me grince (this is a portmanteau of ‘grin’ and ‘wince’ that I just made up) on more than one occasion. Also, there’s a new scene for players getting knocked into the crowd, and buddy, if you like dwarfs hurting people, have I got an animation for you. The current beta build lets you play as Black Orcs, Imperial Nobility, or Elven Union, the third being a great choice on Cyanide’s part since passing is so key now.

There will be twelve teams on launch. Something we didn’t get confirmation of, but which the beta leads me to believe, is that we’ll also be seeing pitch effects. There’s a tooltip for them, set to ‘none’ for the games I played, but my basic grasp of relativity leads me to believe that ‘none’ suggests the possibility of ‘some’, which is exciting. Fingers crossed for Squig balls at some point. 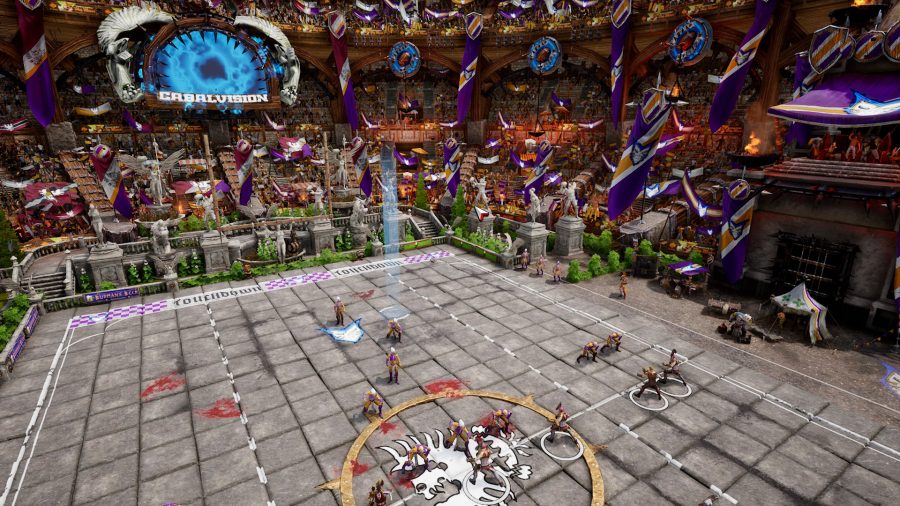 Are there bugs, you ask? Yes. Mainly a persistent animation glitch that saw a player model stay put while they ‘moved’ around the pitch, and some unresponsive clicking here and there, but nothing that renders the game unplayable. The few online matches I managed to get were stable too, and I’d actually suggest newer players go for online over vs AI, since the game moves more slowly and you’re able to keep better track of decisions which, otherwise, are automated a bit too quickly.

Also, the beta is 7.82GB. I never see previews mention this, but I figure it might be useful to someone. We did manage a brief Q&A with the developers, most of which hinted at possible features without confirming anything, but here’s what I gleaned. Blood Bowl 3 releases on basically everything, and Cyanide has ‘intentions’ to look into cross-platform play.

The devs recognise a huge player demand for custom leagues, and further options for player customisation are a ‘point of focus’. Cyanide wants to create ‘tools and features’ for the community to get “the most out of the game”, and there’ll be “good news on this later”. No explicit confirmation on whether this includes mod support, though. 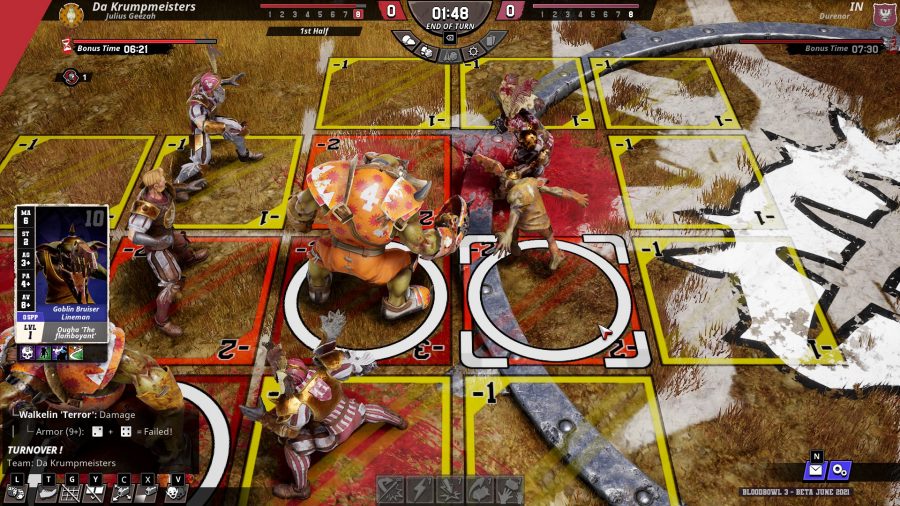 So, once again for the back stalls; a beta is available right now, and you should be able to sign up here. It’s not all pitch perfect on the pitch just yet, but it absolutely doesn’t need to be. Did I mention the goblins jumping up and down on unconscious elves?

Blood Bowl 3 will release on PC via Steam (and everything else) on February 22, 2022, with a Steam Early Access launch in September 2021.