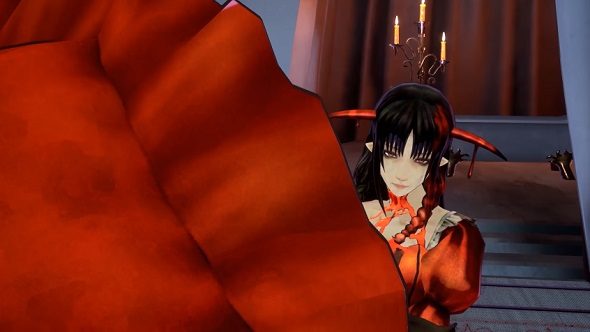 Ahead of the madness that is E3, 505 Games have released a special trailer for Bloodstained: Ritual of the Night. Along with showing off some of the castle interior, this short video reveals one of Bloodstained’s first bosses.

See what other games are on the horizon with this list of upcoming PC games.

Named Bloodless, you first encounter this boss as she comes out of a literal bloodbath. She starts off the battle looking like if Mary Poppins was a serial killer, wearing a huge scarlet dress and wielding umbrellas made of blood. Along with spewing giant streams of blood, these crimson umbrellas will try to skewer you to the floor as Bloodless flies around the room. During the fight, she can even make blood rain from the ceiling, forcing players to take shelter under low flying umbrellas.

Speaking to Polygon, director Koji Igarashi stated that he is experimenting with gothic horror with Bloodstained, which means mixing the grotesque “with a little bit of erotica.” You can see this with Bloodless, with her dress actually falling away depending as you do more damage to her. If you do not defeat her quick enough, she can absorb all the blood from the floor to refashion her dress.

You can see Bloodless in action in the trailer above, with fan reaction being somewhat mixed. The main complaint is that the character animation is nowhere near as smooth as a game like Symphony of the Night, while the 3D backgrounds look awfully basic with Bloodstained’s current lighting engine.

Bloodstained will be playable on the E3 show floor, with this year’s demo being much harder than previous versions. According to Iga-san, the backer alpha will be available this August, with the full game set to launch within the first half of 2018.