I did seemingly miss the point that at first that the B975 is made by a company calling itself Bloody, so I hastily deleted the indignant response to the initial email I’d penned in fury and started earnestly checking out the Bloody B975 keyboard.

The genuine difference maker in the B975 is the type of switches Bloody has endowed the board with. Instead of the traditional mechanical switches offered by the likes of Cherry and Kailh, this Bloody board uses LK Libra optical switches instead, which use beams of light instead of mechanical means to actuate the switch. The benefits can either be using the optical effect to create an analogue mechanism, a la the Wooting One, or simply as a method of getting high-speed actuation, as with the Razor Huntsman Elite.

The Bloody B975 has taken the latter route, picking the method which makes it feel a lot like the Razer optical keyboard. To the point that the switches themselves look incredibly similar, in fact only the printed ‘Razer’ is missing from the switch housing itself, so you could probably assume that LK Libra was the company which made the Huntsman Elite’s Opto-Mechanical switches.

The alternatives: The best gaming keyboards around today

The version of the B975 I’ve been testing, however, has gone for the linear LK Libra Brown, rather than same sort of tactile, clicky switch Razer uses. They both still use the same metal crossbar, however, and that means the Bloody keyboard is still as loud as the noisy Hunstman Elite. You can still pick up the B975 in clacking trim, however, if you go for the LK Libra Orange switched version. 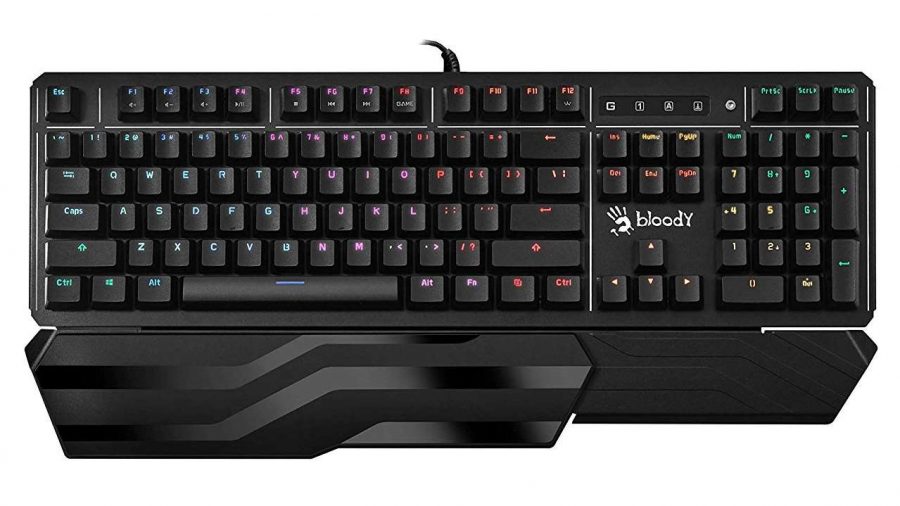 Of course, using the same switches means that the B975 is RGB’d up to the hilt. There’s per-key illumination, a host of different on-board profiles, and Bloody’s own software for managing every other aspect of your keyboard. That’s a list, and not necessarily a list of positives, because if there’s one thing that’s almost universal it’s that hardware manufacturers cannot create good software. Bloody is not unique in this, and all I can say is that it’s a good job you can control enough of the RGB LED illumination from the on-board controls themselves without ever having to really touch the KeyDominator app.

It’s not that much of a surprise the software is borderline impenetrable, but given the high price of the B975 you’d maybe hope for more. Though that is my general impression of this Bloody keyboard as a whole… hoping for more. I was surprised by the $150 (£93) price tag of the board, because there isn’t really anything about the B975 that suggests it. 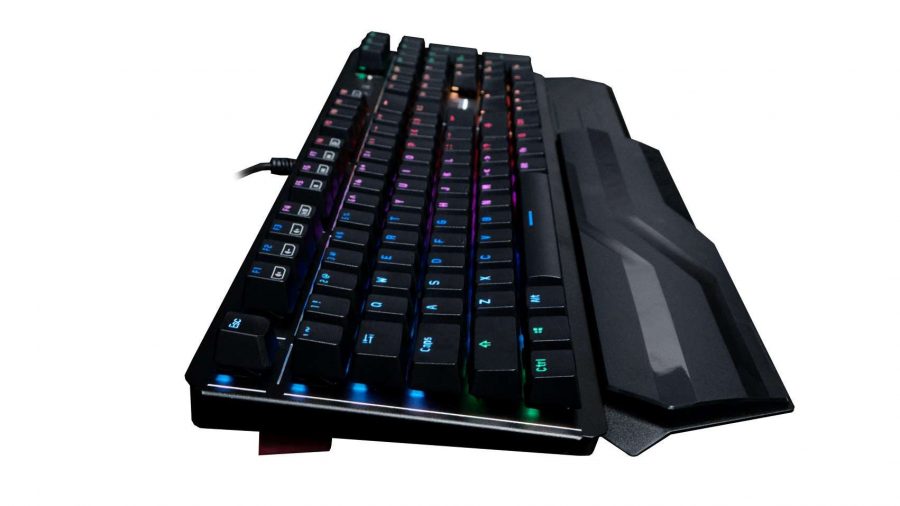 Sure, the metallic base is solid, and the legs which raise the typing angle up don’t fold back when you shift the board around your desktop, but the keycaps feel a little loose, and the wrist rest is just some slightly textured plastic you have to screw into the base. And even then it still flaps around.

This all adds to the noise of the board. And not the pleasant, solid, clack of a good mechanical keyboard, it’s more like the loose, phlegmy rattle of an old smoker’s cough.

That probably paints an overly negative impression of the Bloody B975 board, which is maybe a little harsh. There’s nothing that wrong with it, but it does feel like a $60 mechanical keyboard, rather than the high-tech board the high-end switches might otherwise indicate. The optical switches Bloody has used are lightning quick and if response time is key to you that might sway you its way

But there are still far better gaming keyboards you could buy for the same money as the Bloody B975. The Hunstman Elite is almost identical in terms of spec, but offers more of a high-end design, and the excellent Wooting boards deliver the speed of the LK Libra optical switches, but also have the extra utility of the Flaretech analogue optical switches. In such a saturated market that makes the Bloody B975 an almost impossible board to recommend.

A speedy gaming board that doesn't have the high-end aesthetic or build quality to go with its high-price and high-tech optical switches.