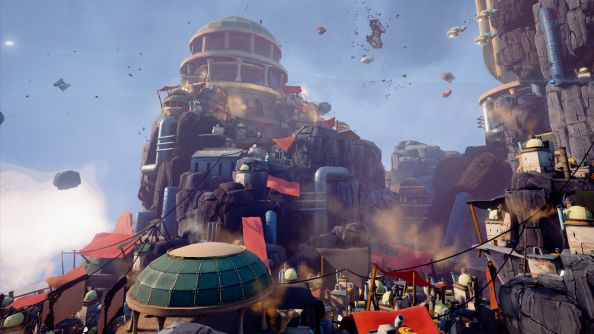 Games are made for all sorts of reasons. For entertainment, obviously, but sometimes also for advertising. Persistent Studios make PopcornFX – the middleware that provides pretty particles for games like Trove and Black Desert. Thing is, it’s quite tricky to showcase pretty particles. You can’t put them in window displays, and they don’t look quite right in catalogues.

Prefer to ride the skies with a friend in tow? Pick from the finest co-op games.

So the studio is making a side-scrolling shoot-’em-up. Where better to see bright lights and elaborate explosions?

It hasn’t been quite that simple. Lead developer Jérémie Thomas – who worked both for himself and for Ubisoft before joining Persistent Studios a year ago – wasn’t particularly a fan of the genre, so the project began with plenty of research.

“We studied a lot,” he recalls. “During two months we only played side-scrollers to find what is good and what is bad. We went to the super players of this field and asked them what they like and don’t like.”

What they don’t like, it turns out, are flashy effects getting in the way of their game.

“It’s completely opposite of what we want to do,” laughs Thomas. “They want everything to be completely crystal clear. Sometimes it’s confusing in our game but we’re working to make it something both hardcore and midcore players like.”

Thomas’ team began work in Unity, but considered it “not beautiful enough” for their purposes and switched to Unreal Engine 4 in September. What strikes most about the results is Boiling Bolt’s constantly shifting perspective: though the player fights on a 2D plane, that battleground exists as part of a 3D world dominated by floating islands – decorated with wooden pagodas, jutting metal barriers and exposed pipework, the evidence of a war between magicians and technomancers.

Your ship drifts from background to foreground and back again, weaving in and out like the needle in a violent cross stitch. Drawing that path through the world has been a challenge akin to storyboarding an endless George Miller action scene. 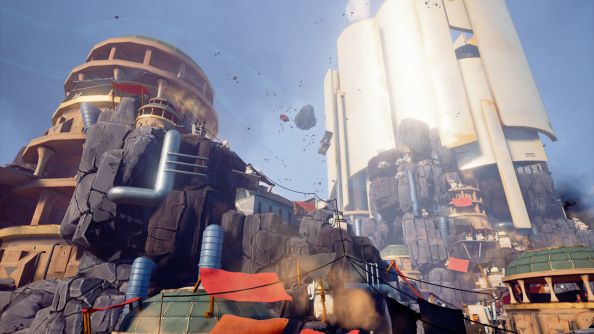 “We are working with a lot of white box,” Thomas divulges. “With Blueprints, everyone can make things in the game so it’s not so complicated to prototype in Unreal.”

The team spent an entire month mapping out one prototype level before handing it to an artist – counterintuitive for a studio immersed in cutting edge graphics.

“Because we are a VFX team, some people are making effects on their own or for another company and we’re like ‘Wow, that’s cool, we have to put it in a game,’” says Thomas. “But we can’t use it.”

Each time the team creates a particle effect, they ask themselves: “It’s cool, but is it useful?”

Sometimes, it is. Persistent Studios had put together an effect simulating the implosive power of a black hole – so Thomas’ team built a weapon around it, capable of creating whirlpools in the sky that drag enemies to their doom. 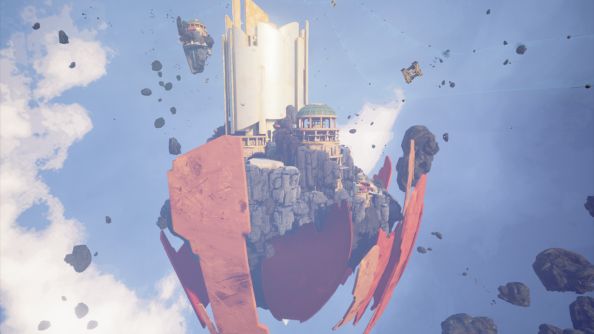 Elsewhere, Boiling Bolt’s mechanics draw not just from classic shoot-’em-ups but the contemporary likes of Bayonetta and Quantum Break. Players can slow time, in order to dodge projectiles and catch their breath. In co-op, two ships are linked by a thin bolt of electricity – a high voltage wire used to trip anything caught between them.

Players start every stage with four weapons, and switching between them intelligently is essential to dealing with encroaching ships – as well as each level’s boss.

“Most are like mechanical animals,” Thomas elaborates. “We don’t know why, but it’s fun. They’re really important but we don’t want to make them in a traditional shoot-’em-up way, where you arrive at the end of the level and there’s a boss. In some levels it will be in the middle. We want to change that way of thinking.”

Persistent Studios’ attentive approach to development continues. At a recent event, they took on feedback from players still struggling to see the game through the ambience. 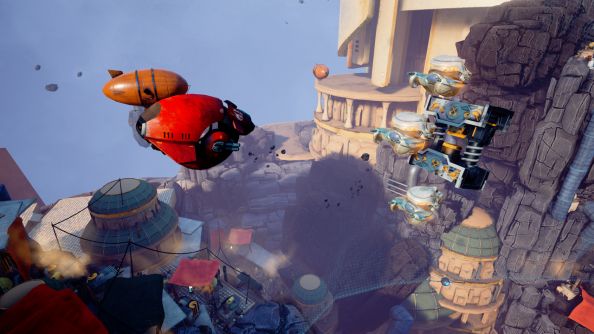 “Visibility is the difficult part,” says Thomas. “There’s too many things on screen. The camera moves too much. So we listened to them.”

That said, the team’s own interests haven’t been entirely secondary to those of fans of the genre.

“In our team a lot of people like beat-‘em-ups – we like the scoring systems,” explains Thomas. “It’s really enjoyable when you have lots of combos and stuff like that, so we put some beat-’em-up parts in our shooter.”

In this sponsored series, we’re looking at how game developers are taking advantage of Unreal Engine 4 to create a new generation of PC games. With thanks to Epic Games and Persistent Studios.