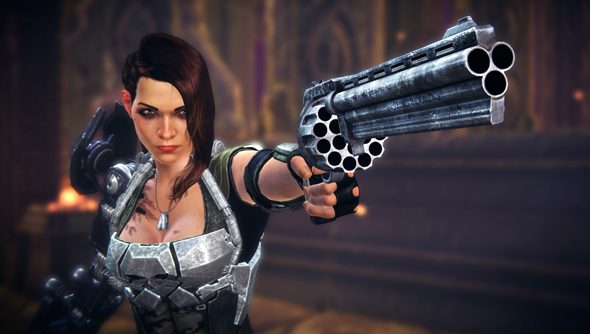 A new, unsmiling protagonist aside, 10 minutes with Bombshell are enough to see that it takes its tone from Duke and Doom –  and its mechanics from Diablo and Dungeon Siege.

Rise Of The Triad lot Interceptor are behind this jog through a series of isometric maps – in which you’ll blast apart alien monsters with more limbs than lines of AI code, hoovering up ammo and other doohickies as you go.

There’s the faintest glimpse of some intriguing abilities – at one point, Bombshell appears to gain a ghostly echo of herself as backup. But the temples and abandoned tech all sport the same red-brown hue.

The quest-giving dialogue is just as bland, despite the Zelda references. Somehow, Bombshell’s arrogance doesn’t quite translate into the swagger of similar, better-known FPS protagonists.

There’s a sequence in which she stuffs a bomb in a baddy’s neck, and weapon names like Motherflakker and Ion Maiden – links to the ‘90s heydey of gleeful murder and heavy metal that surely led Interceptor to release the footage alongside QuakeCon. But I can’t quite see where the glee comes in. Can you?

Bombshell is coming to PC in the autumn.

Did you know?The voice of Duke Nukem hates guns, violent games and irony.