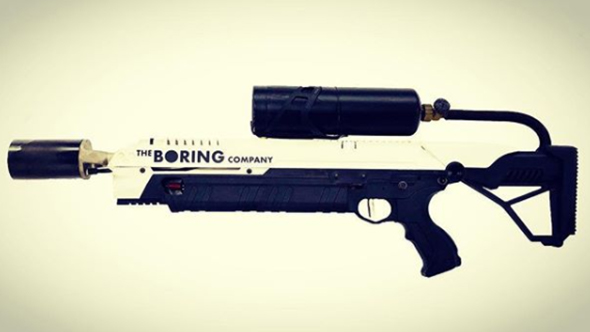 You probably know Elon Musk as an investor and engineer, with interest in projects ranging between transportation solutions, sustainable energy production, and the establishment of a human colony on Mars. Musk’s latest project, however, is perhaps the most ambitious of all – a line of novelty flamethrowers. Apparently, those flamethrowers might just be in the next Borderlands.

Get fired up with a fiery list of everything we know about Borderlands 3. Fire.

The svelte fire guns look like they belong in a game, with a shotgun-like design and a logo for The Boring Company – Musk’s tunneling transportation venture – emblazoned on the side. Since opening pre-orders, Musk has spent the past couple of days on Twitter quieting rumors that he’s starting a zombie apocalypse to drive demand. “You’d need millions of zombies for a so-called ‘apocalypse’ anyway. Where would I even get a factory big enough to make so many!?”

“But wait, there’s more,” Musk says in promotion of the new product, “the flamethrower is sentient, its safe word is ‘cryptocurrency’ and it comes with a free blockchain.” At this point, Gearbox CEO Randy Pitchford decided this new weapon is too perfect not to be part of a videogame – specifically, the next Borderlands.

Elon – I’m going to add this to our next Borderlands game. Super serious. Let me know if you want to write the flavor text. You may have already done so – we’ll just lift it from one of your tweets.

Musk replied “sure,” which is probably about as much confirmation as we’ll have until we see The Boring Company logo in-game.

I believe this technically marks the first time it’s been publicly confirmed that Gearbox is working on a new Borderlands, though they haven’t been making any great efforts to keep their obvious next step a secret.

If you want to preview the flamethrower ahead of Borderlands, you can pre-order it now for $500, and optionally add a fire extinguisher to your order for $30. “Obviously, a flamethrower is a super terrible idea,” Musk warns. “Definitely don’t buy one.” Despite his warning, there have already been 10,000 pre-orders. The fire extinguisher has only sold 3,000, so I’d venture to say we’re all doomed.