Westerns are having a moment of late, as seen in the masterful reimagining of Westworld, the applauded sequel to Red Dead Redemption, and even the fateful remake of The Magnificent Seven. What’s always been interesting about this genre, though, is its ability to keep fresh, often by diverging into others.

You can find the Wild West brushing against so much of modern TV and film in neo-westerns such as Breaking Bad, or literature such as Stephen King’s latest deep-south novel The Institute, which comes complete with a good ol’ fashioned showdown. Given this endless mutability, there’s no reason at all that a Western-themed piece of DLC for a spacefaring videogame should seem out of place, especially when that game is an eccentric and zany loot shooter like Borderlands 3.

As Gearbox creative director Matt Cox explains, Borderlands has always had more than a touch of this aesthetic. “Sometimes people associate Pandora with sci-fi western,” he says. It’s easy to squint your eyes and see it in Pandora’s dusty plains, Wainwright’s old country estate, and slinging shots at enemies with your Jakob’s revolver, but Cox continues, “Bounty of Blood was our opportunity to take a deep dive into a hardcore Western that’s honestly slightly darker than a Borderlands story.”

Cox lists a bunch of Western films – not just from the West, but around the world – from which the studio drew inspiration for Bounty of Blood: 13 Assassins, 3:10 to Yuma, the Seven Samurai, and the classic The Good, the Bad and the Ugly. Although all very different, there’s one common thread that ties these iconic movies together: redemption. It’s a sad irony that, at least in my experience of the genre, a tale of redemption usually leads to death – and a lot of it.

Related: Check out the best FPS games in 2020

Cox didn’t expand on the story too much – he wants to keep that a surprise – but he says “I’m so proud of our team for pulling off a really high-impact, self-contained story about revenge and redemption that hits so many classic Western notes, while having a personality all of its own.” Although the 15 minutes of gameplay we’ve already seen gives us a glimpse of what we can expect, Cox reiterates that this is an impactful tale of redemption for the characters involved – Borderlands’ usual bolshy tone and scatalogical humour might have to take a back seat in this darker piece of DLC.

You’ll land on the new planet, Gehenna, and roll into the town Vestige on your loyal steed, a motorbike called the Jetbeast. Vestige is home to the Devil Riders, a gang of beast-riding mercenaries that have taken over the planet in the last few decades. This new environment also offers a slight twist on Borderlands’ usual action: “We have brand new gameplay objects that add a Metroidvania ingredient to the classic Borderlands loop,” Cox says. “Vestige will change depending on what the player does, so there might be some boarded-up stores that reopen because you completed a side mission in a certain way. We have a theatre challenge where you find lost film reels, and if you find them all you’ll get to get to watch a short film in a theatre. We have a prisoner that you end up freeing who writes a song about the entire main story.”

Gehenna sounds like a character in itself, with plants that react to your actions. “We have a plant that lifts you into the air,” Cox teases, as well as a “rock plant, where you melee it and it just shoots out high-damage shrapnel, and a Traitorweed, where it releases these bugs that infect people and you can turn enemies to your side for a certain amount of time.” There’s also a neat new tool called the Telezapper, a teleporter that can be used to travel between two points.

As well as the central town, players will explore and complete side quests beyond the frontier. Asphalt Peaks can be found up a mountain cliff and provides a snowier locale, a bit like the Grizzlies in Red Dead 2. A giant lodge, built and then abandoned by a mysterious company, has been taken over by the Devil Riders. Of the other three new environments, one definite highlight is a forest of obsidian rocks in a vast underground cavern where we meet another character called Alita. 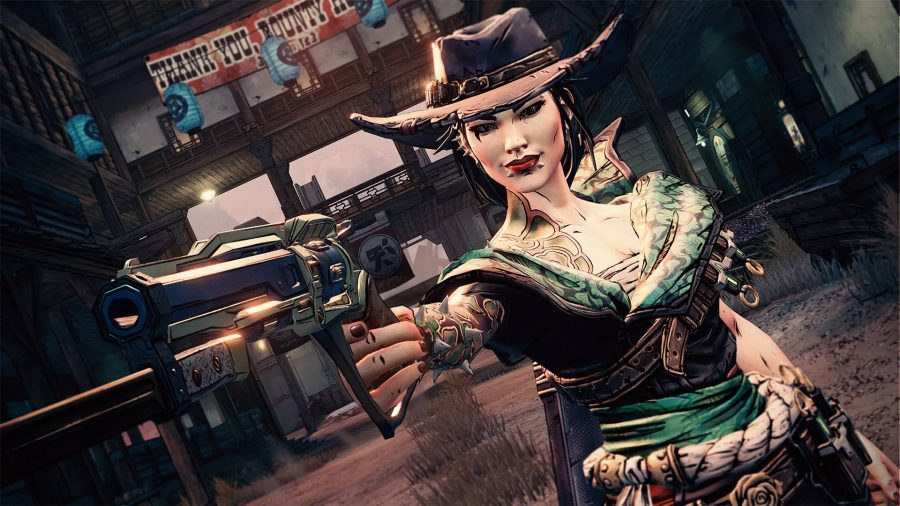 Speaking of characters, Cox acknowledges that many in the community would love to see certain old favourites – and yes, I do mean Handsome Jack – return. “But there is also that hunger to see new characters introduced, because some of the most beloved characters in the Borderlands universe were introduced in DLC.”

This DLC will give fresh characters room to find themselves in the Borderlands universe. “We want a Bounty of Blood to be full of life,” Cox says on the subject. “There are brand new characters, they’re the only characters that return, and the Vault Hunters themselves. So when you arrive on this brutal frontier planet, you get to meet a whole new cast of characters, a whole new conflict.”

Rose is the first character we’ll meet when we land on Gehenna, and she will act as our guide and ally, helping us in combat on this harsh and unforgiving planet. Later in the game we’ll be introduced to Juno, “a rough-and-tumble brawler” who has a “very chequered past, but she’s reformed her ways and now lives on the outskirts of Vestige.” Juno is at the forefront of the DLC’s exploration of redemption, as she looks to earn our trust in helping us take down the Devil Rider gang. 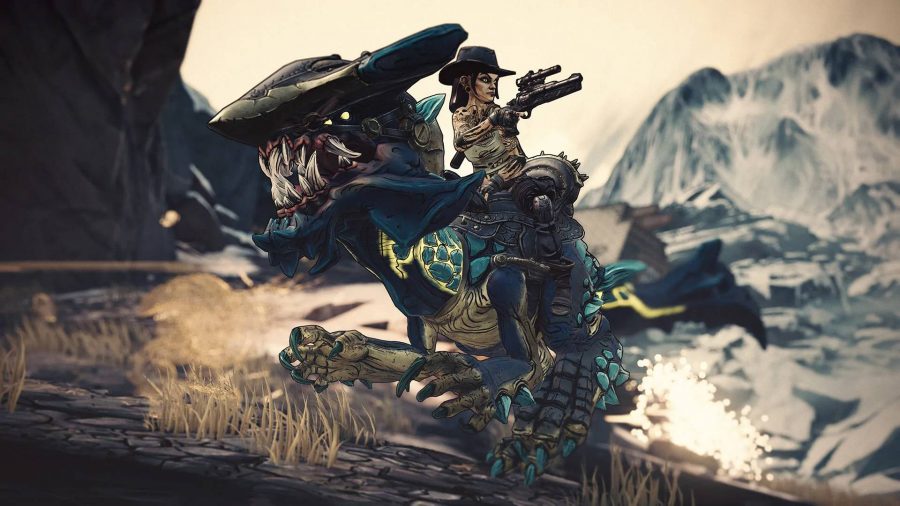 When it comes to bosses we might see in Bounty of Blood, Cox speaks about his time on the main Borderlands 3 boss fights as lead boss designer, including his time spent designing the Tyreen Calypso boss fight. “I’m a Nintendo nerd. I grew up playing a bunch of Nintendo and Super Nintendo. There are a lot of influences from Zelda and Mario bosses that went into Tyreen, being able to climb on her back like the monster at the end.” Maybe we’ll see some of this inspiration in Bounty of Blood bosses – is it too much to hope for a gunslinging Bowser with retractable spikes?

The aforementioned Jetbeast is the only vehicle available on Gehenna. As Cox describes it, it’s “half jet hoverbike, half creature”, with a trophy mount on the front, and you can expect the Devil Riders to counter you with genetically modified Saurians. Your first ride into Vestige is narrated – a first for Borderlands. Cox says this “narrator will be with you during the entire story, commenting on things that are happening, or setting up other stories.”

It seems like there will be a lot that Borderlands fans haven’t seen before in this latest DLC, so get ready to pull up your bootstraps and saunter into town for June 25 when Bounty of Blood releases. In the meantime, check out the best western games on PC.