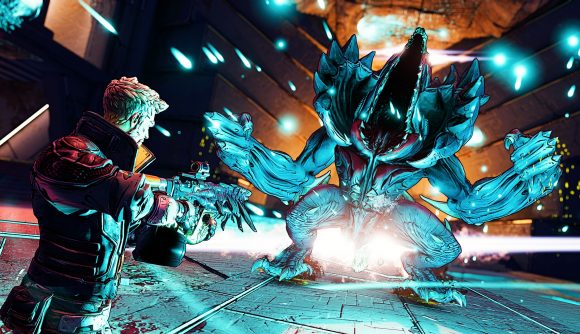 Borderlands 3 has got its final Vault Card of the Director’s Cut edition as part of a new update. The latest slice of content arrived alongside other bits and bobs on November 18, so it should be waiting for you when you boot the game up.

Vault Cards give you more loot and experience while active, with each drop adhering to the theme of the card itself. The first Vault Card, Fallen Heroes, was a tribute to some of the game’s gone-but-not-forgotten allies. The third and final Vault Card is called Bunker Masters, and it’s up for grabs now if you own the Director’s Cut add-on.

It’s not all about the Director’s Cut edition, though. If you head to the Proving Grounds maps, you’ll find a switch that enables the True Trials event. You’ll still be gunning down foes in the name of loot, but you’ll find that the final bosses have received huge buffs to their health and damage. Crazy Earl’s Shop has three new Echo Device skins if you fancy wearing something new to the mayhem.

Alongside a limited-time co-op Loot Drop event that runs until November 25, you’ve also got oodles of stability, UI, and character fixes. If you’d like to see them in full, you can find the patch notes here.