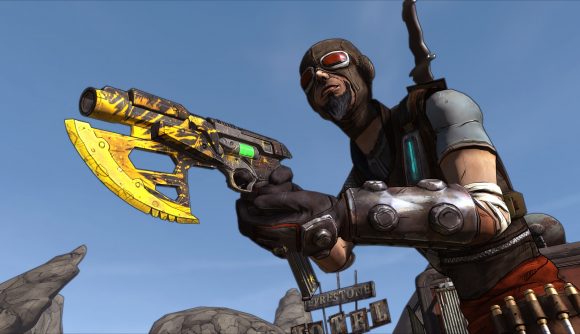 The OG co-op loot-shooter Borderlands is free on Steam this weekend. With the Borderlands 3 release date of September 13 just around the corner, now is the perfect time to get caught up on the bombastic series and its trigger-happy characters. The edition that’s on sale is the Game of the Year Enhanced package and includes revamped visuals, character models, weapons, and textures, as well as a whole host of new guns to add to the one billion on offer in Borderlands 3.

Gearbox’s GOTY edition also includes all of Borderlands’ DLC, so you’ll also have access to The Zombie Island of Doctor Ned, Mad Moxxi’s Underdome Riot, The Secret Armory of General Knoxx, and Claptrap’s New Robot Revolution. The Game of the Year edition was released earlier in April this year.

Borderlands was first released in 2009 and has since sold over 43 million copies worldwide across all its respective platforms. The series’ popularity is still going strong, and Borderlands 2 still has one million players a month six years after its release.

Borderlands 3 looks like it’s going to cook up a whole bunch of mayhem, you can check out the trailer for the game below.

If you enjoyed Borderlands’ lawless high jinx through the free weekend, then you can buy the bundle at a 50% discount on Steam until July 22.