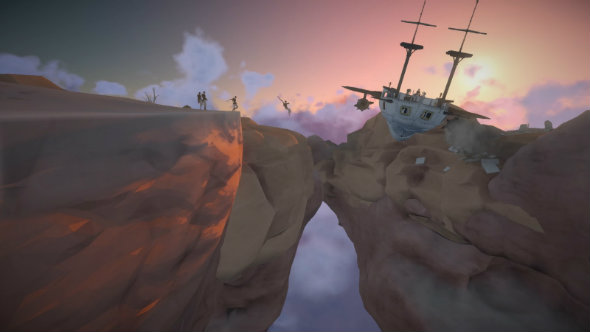 Bossa Studios have secured a large portion of funding from London Venture Partners to aid in the creation of hugely ambitious MMO Worlds Adrift. Combining Skies of Arcadia with Minecraft and a never-ending, procedurally generated world populated by thousands of players, it has the potential to be massive.

It may well even join the prestigious ranks in our list of PC’s best MMOs.

Every action taken by any player in Worlds Adrift – from a felled tree to the debris of a battle – is retained by the servers indefinitely, thanks to the utilisation of some incredible new technology. If you join Worlds Adrift months after release, you will find a world filled with the battle scars seared into the landscape by other players.

I interviewed the lead designer a while back and spoke about the creation of Worlds Adrift and its clever tech.

“We’re at the edge of a transformation in the games industry that will fundamentally change the way players interact with games,” says Bossa CEO Henrique Olifiers. “Advancements in artificial intelligence, near limitless processing power in the cloud and large ­scale simulations are aligning to empower a new kind of entertainment that is built on the fly.

“The games of tomorrow will be unique, tailor­made experiences for each individual,whose actions will fundamentally affect the world around them, influencing everyone else’s experiences in unexpected and interesting ways.

“Worlds Adrift is the first game of this new generation, enabling players with a freedom of agency that has never been achieved before. It’s a universe that responds to every possibility engineered by a player: if they can think of it,it should be possible. This creates the ‘emergent gameplay’ design philosophy that Bossa Studios is spearheading.

“Think of it as the difference between a scripted TV show where once you’ve watched an episode and know what’s happened, there’s little point in watching it again; versus an improv stage where the same scenario can lead to an infinite number of unexpected interactions due to actors empowered with full freedom each time.This is what Worlds Adrift creates.”

The investment should allow Bossa to accelerate development on Worlds Adrift while simultaneously working on their other projects.