Breakaway is Amazon Game Studios’s brutal take fantasy football with the added frisson of commanding the stolen power of a distant star to smite the rival team. It’s a tale as old as time, really…

Amazon have long been the backbone of multiplayer gaming, with Amazon Web Services supporting some of the biggest developers in the business. But now their own in-house development team is taking those goodies, along with the Lumberyard game engine, and stepping into the foreground.

“What we are focusing on right now,” Amazon Game Studios state, “is taking a lot of the same tools and technologies we’ve been giving other developers and using it ourselves to build unforgettable online experiences, that are powered by communities that are as much fun to watch as they are to play.”

That’s an ambitious goal and, with Breakaway, they’re targeting both the gamers and the more voyeuristic by offering broad Twitch integration built directly into the game from the get-go.

But what is it? Like the headline says, it’s essentially a 4v4 version of the Blood Bowl spinoff, Dungeonbowl, except decidedly not turn-based and running at the breakneck speed of the lightning-quick Overwatch. You and your team of special characters, or Warriors, must work together to get the ball, or Relic, from the centre of the field of play to the opponents score zone to win a round.

Or you could always just wipe out the other team using haunted swords, revolvers, or the aforementioned stolen star stuff.

A match runs to a best of five finish, with the first team to win three rounds being declared the winner. The premise is simple, but there are a host of complications thrown into the mix which will demand teamwork and some rather strategic gaming.

The 11 Warriors are divided up into four different classes and each have three individual special attacks, which all have in-game cooldowns. They also have a defensive special move and a single buildable item to be deployed once per round. These structures can persist throughout a game unless destroyed so you can end up creating serious fortifications around your own end zone.

The different classes are pretty standard fare: tanks, ranged DPS, melee DPS, and support. And to stand the best chance of victory you need a balance of all four as well as some idea as to what your character is truly capable of… as I found to my cost. 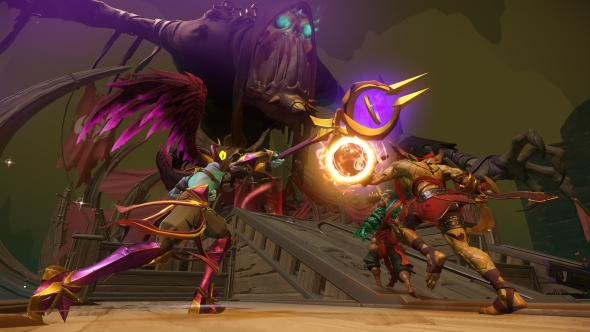 I’m not the most capable of multiplayer gamers, I’ll admit, but as soon as I stepped out of my support-giving comfort zone and tried to tank my way around Breakaway’s tight, multi-level maps I found myself in a lot of trouble. Understanding what your Warrior is best at, and leveraging that for the benefit of your buddies is the way forward in Breakaway. Sadly, that’s going to take more time than I was afforded during my Gamescom session. And, partly because of my ineptitude, my team suffered a three to nil drubbing in our second match.

Thankfully, the pace of the game is such that even a resounding defeat isn’t going to take up too much of your time, and you’ll quickly learn from your mistakes and come back fighting next time. That quick turnover of matches is going to be key to its success as a spectator sport, as is the ever-tricky task of balancing player characters.

As such, Breakaway is in alpha right now, with the team at the imaginatively titled Amazon Game Studios hoovering up any and all feedback they’re getting from the current weekend alpha playtimes to feed back into the game. Once the alpha phase is over they’re going to take all their learnings back to the Amazon skunkworks and figure out where to go from there.

And that means there’s still no firm release date for Breakaway, but if you want to get in on the super-speedy Dungeonbowl-y action you can sign up for the weekend alpha at the game’s main site.