Funcom’s LEGO Minifigures Online has a design challenge that’s about as awkward as its name: it has to be a child-friendly MMO, but it also needs to keep the interest of older kids and parents.

LEGO toys and the spin-off videogames make this trick look effortess, but I’m not entirely sure Minifigures Online wil manage it. While it definitely seems like a whimsical and approachable LEGO game for five and six year-olds, it’s so simple and harmless that it seems like it would wear thin. Based on a thirty minute hands-on demo, I’m a little worried that Minifigures Online makes the one mistake that LEGO toys never did. It seems to underestimate its audience.

LEGO Minifigures Onlines has nothing to do with LEGO Universe, the defunct LEGO-themed MMO from a few years ago, except perhaps in the lessons that Funcom has drawn from that failure.

Where LEGO Universe was basically a standard-issue MMO (right down to the modern ambivalence about committing to free-to-play or clinging to the subscription model), Minifigures Online is a co-op action RPG. There’s no village full of quest-givers hanging around, asking players to go grind mobs for an hour, nor much character progression to speak of. This is a game that just points players down a path full of enemies and says, “Go get ‘em.”

“We avoid most of the same issues that game had,” said Oscar Lopez Lacalle, lead designer. “What we’re trying to do here is just, on the surface, a product for kids. Very simple, very easy mechanics. But you scratch the surface and explore, then you have a more advanced and fully-realized action RPG title.”

Each player chooses three Minifigs to bring on the adventures, though you can swap them out anytime. They’re classic LEGO characters from different playsets, like the Knight from the Medieval sets, and the more modern “Trendsetter”, a hip “it’” girl with a superpowered LEGO smartphone. Each character as a main attack and a special ability, and those can develop synergies with other party members’ powers.

While Funcom weren’t giving any details on the business model for Minifigures Online, the demo room was littered with little bags full of Minifigures, and there are going to codes inside these bags that will let you add new characters to your account. It seems safe to say there will be some kind Skylanders-esque collection element to this. They plan on launching the game with 100 characters, and then adding more, but I’m not sure how they will avoid the problem of duplicates.

The characters are loose interpretations on a wide variety of RPG archetypes: mages, bards, clerics, fights, etc. They range from Level 1 through Level 10, with each level corresponding to a presumed degree of difficult. Level 10 characters require the most management from players to make the best use of their abilities. 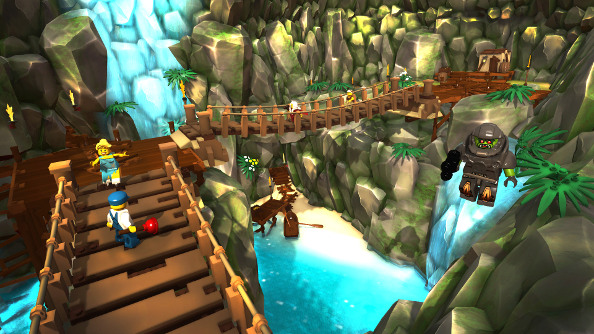 That’s a good direction for Funcom to be taking things, but I came away from my sessions with some reservations. LEGO Minifigures Online plays too much like a de-fanged Diablo or Torchlight: With a full party, there doesn’t seem to be much threat from the enemies, nor even a lot of diversity in their tactics. Kite them, burst them down, charge into melee… it’ll probably be fine. If it isn’t, it seemed like you could just swap to your second and third character and they’d have max hitpoints.

It’s possible that we were playing on a safe difficulty setting for the purposes of a demo, but that doesn’t change the fact that it felt a little too stripped-down for my tastes. That’s fine, you say, it’s not for the likes of an adult games-writer.

The problem is that that I’m pretty sure kids are more demanding than this. I know what I was playing at age eight or nine, and it wasn’t anything like LEGO Minifigures. A friend’s son, at age six, started to get into Tribes and by age nine he was practicing League of Legends seriously. LEGO Minifigures claims to be for ages “5+”, but that “+” sign felt awfully aspirational to me. The advanced LEGO characters felt at least a little bit interesting, but the basic ones required very little.

I hope Funcom can address that issue with the difficulty, because Minifigs Online is a charming game that’s packed with vintage LEGO flavor. It’s fantastic to see the characters and models from my old Pirates playsets pop up, or the old Centauri Outpost sci-fi series. There’s a cute sense of humor at work, like when you enter a “Pirate’s Bay” and find the pirates are running stacks of servers and computer workstations.

LEGO Minifigures Online has a lot of good ideas, and the controls and combat were so responsive and precise that I suspect its PvP modes may end up being a major draw when it comes out in the fall of 2014. It just needs to to expect a little more from its audience, especially if it’s to emulate LEGO toys’ most important attribute: their ability to grow up alongside their audience.