Those old scamps the Brazilian ratings board have broken the existence of another remaster, this time for Bulletstorm. Not content with letting us all know about BioShock: The Collection months before the official announcement, they’ve now revealed that something called Bulletstorm: Full Clip Edition will be hitting PC (along with Xbox One and PS4) some time in 2017.

Which of the greatest FPS games on PC would you like to see remastered next?

You can see the full listing here, or a picture below if they get around to deleting it. 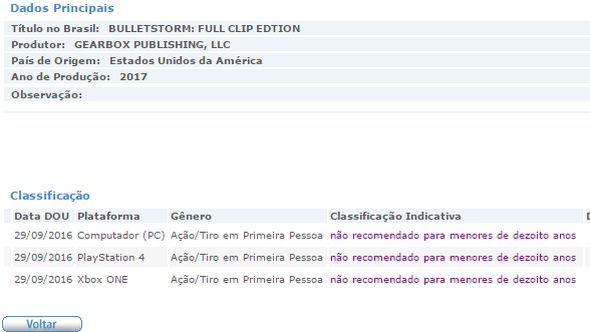 As you can see, Gearbox are publishing. That probably means People Can Fly have been doing the upgrade work, as they retained the franchise rights after splitting from Epic Games in 2015. They did mighty good work last time, so fair enough.

It’s odd that we’d see it being rated this early unless the announcement was forthcoming – perhaps at one of the shows taking place before the end of the year, like The Game Awards or Playstation Experience – for a fairly early release next year. Having said that, it will now likely be delayed until mid 2018 after an announcement at E3 or something. Either way, it’s very likely on the way, given previous leaks have proved true.