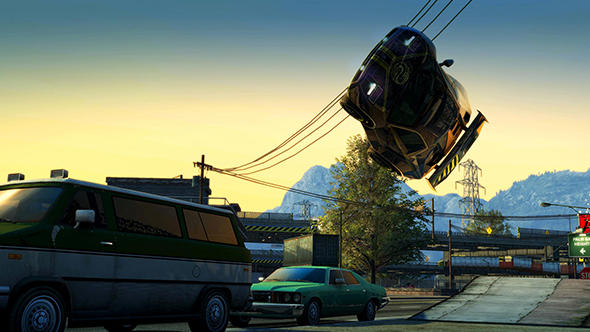 Burnout Paradise Remastered is coming primarily to update the excellent 2008 open world racer for 4K resolutions and smooth 60fps gameplay. As a discerning PC player, you may wonder why you should be interested in the re-release when you can already play Paradise at that level of graphical fidelity. The answer: this will be the very first time all of the DLC will be available on PC.

Get more driving action with the best racing games on PC.

The remastered edition hits Xbox One and PlayStation 4 on March 16, with the PC version to hit Origin “later this year.” Here’s the full list of included DLC expansions:

The Party Pack was part of the original Ultimate Box release on PC, and the Legendary Cars, Toy Cars, and Boost Specials add-ons were available as a separate purchase. This is the first time Cops and Robbers or Big Surf Island has been available on PC (aside from some questionable mods), and with the latter adding a major new area to explore it’s a very significant addition.

You’ll also be happy to know that apparently none of the original game’s soundtrack licenses have expired, so you can keep cruising to Slash shredding through Paradise City every time you boot up. Ah, the good old days.

Burnout Paradise Remastered will be available for $39.99 / £34.99 on consoles, and we’d expect the PC price to be pretty similar.