I could append a ton of qualifiers to how much I loved Call of Juarez: Gunslinger. “For a $15 game…” or “Approaching it with low expectations” or “As Western shooters go…” But they don’t do justice to the sheer delight I took in playing it.

Gunslinger is a thoroughly conventional shooter, but it approaches its straightforward task with such style, simplicity, and humor that playing it was like being a bubble in a glass of champagne. I was propelled along by its effervescence, struck at every turn by its canny use of limited resources to create something unique and sometimes even beautiful. In this, more than anything else, it is a kindred spirit to the Hollywood Westerns that helped make the frontier such an indelible part of American culture.

Gunslinger is an old man’s tall tale to a bar full of credulous (but increasingly skeptical) townsfolk sometime after the closing of the frontier. Our character, Silas Greaves, presents himself as the Forrest Gump of the Old West. Name a famous gunman, and Greaves either rode with him or dueled with him, and his dubious recollections are the basis for our missions.

But right from the first, through collectible “Nuggets of Truth”, Gunslinger reveals itself as a story about the lies and myths that grew up around Old West. We meet Billy the Kid in the first mission, a brash young bravo shooting it out with a legion of lawmen. Then we find a collectible that contains a brief biography of the actual William Bonney. It sketches a portrait of a kind and brave young man who got caught up in a frontier feud and then spent the rest of his life being hunted by a man that would eventually murder him, and then create a legend around Billy the Kid in order to justify the crime. 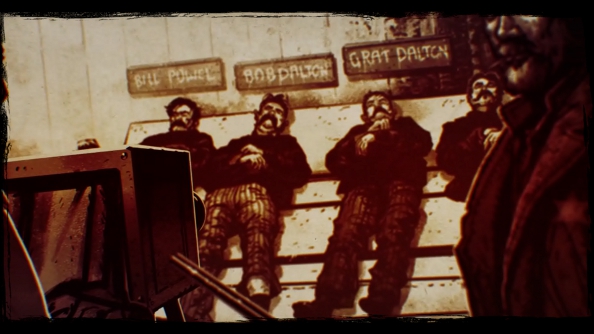 So what to make of Greaves, and his blood-soaked shit-stories? It’s hard to say, but Greaves (colorfully voiced by John Cygan) is such a storyteller, and developer Techland have such evident fun with the way he is contradicting himself and making it up as he goes along, that I found myself playing it from the position of one of those listeners at the bar, swept up in the action to the point that I didn’t care what was true.

Levels deconstruct and repopulate themselves based on his whim, and occasionally Greaves even comments on the absurdity of his tale. At one point, during a huge gunfight through an old sawmill, replete with cover in the form of stacks of timber and logging equipment, he suddenly remarks, “You know, that was a most prodigious large mill. It really was one hell of an operation.”

Excellent music and sound design complement the storytelling. Gunslinger possesses something between the low-fi, grimy aesthetic of spaghetti Westerns and the more kinetic, modern sensibilities of a Tombstone, or even Django Unchained. Electric guitars play against mournful harmonicas and horns, while frontier towns and abandoned mines erupt with loud, percussive gunshots and the mechanical snapping and banging of six-shooters and lever-action rifles. 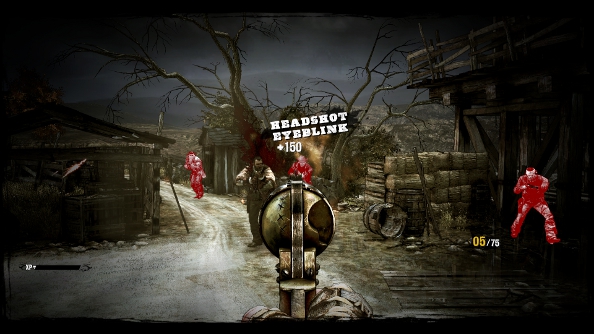 Nothing about the combat is particularly special, but its XP system does reward skillful play and exploration, giving it an arcadey feel reminiscent of Bulletstorm. Silas gains more XP as he chains kills together, Gunslinger awards lots of extra points for skill shots. Headshots are all well and good, but a headshot on a running target at 200 yards through a fence is real marksmanship.

You can also select special abilities that make Silas more effective as a two-pistol gunman, a long-range rifleman, or a hard-charging shotgun-master and brawler. The abilities further empower your skill shots, enabling Silas to go on absurd kills streaks that yield tons of XP and make his weapons start hitting for massive extra damage. To help him out, Silas has “concentration”, which enables a very short burst of bullet-time, during which he can dodge shots and pick off targets with ease.

True to its name, Gunslinger also features a lot of duels. These are an odd minigame in which you stare down an opponent, keeping a shrinking reticle over him to give you “focus”, which basically makes your shots more accurate on the draw. Meanwhile, you use the A and D keys to adjust where your hand is dangling over the butt of your pistol, enabling greater speed. You can draw first, for a penalty to XP, but either way, once someone draws it’s down to your speed and focus to ensure Silas is the last man standing. It’s an interesting system that communicates a whole lot of tension, but I’m not sure it actually works as a fun test of skill. Fortunately, Gunslinger uses it sparingly, so it does not wear out its welcome. 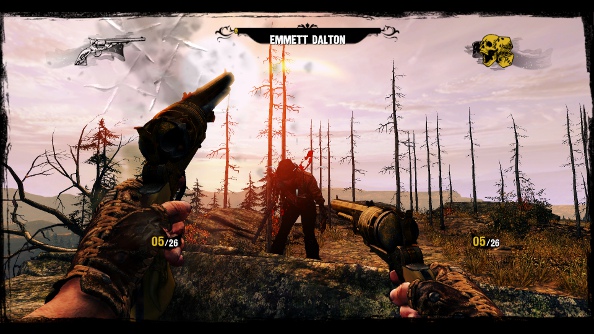 The same can be true of most of the things Gunslinger does. Just when I was starting to get tired of running into Gatling guns and destroying them with dynamite, one of the characters commented on how often this was happening in Gunslinger’s story, and there was only one or two more instances of its use before the end. It also reuses a ton of assets (I’m pretty sure I fought through the same town at least three times, with very minor changes to its layout), but it changes up the action enough that I didn’t mind. Besides, one majestic mountain trail or dusty cow-town should look much the same as another. It’s exactly the kind of thrift that B-games should be aiming for, an embrace of limitations that adds style rather than calls attention to what Gunslinger is not.

Gunslinger does not seem quite ideally optimized on PC, running a bit choppily, dipping precipitously towards 30 or 40 frames-per-second during action scenes, and this on a quad-core 3 GHz machine with an Nvidia 560. Not the latest, but certainly a rig that seems like it should have gotten more out of Gunslinger. I’ve also seen some complaints about the field of view, which you cannot adjust (a patch is supposedly on the way). It is a bit confining, but I did not find it objectionable, and I’m someone who can barely stand the field-of-view in the original Bioshock or the default setting for Skyrim.

None of that diminishes Gunslinger’s easy charm and wit. It is an over-the-top fantasy of the Wild West, a series of engaging tall tales from an increasingly inebriated fabulist. It doesn’t always make sense and it’s certainly not convincing, but it all makes for one hell of a witty and refreshing shooter.