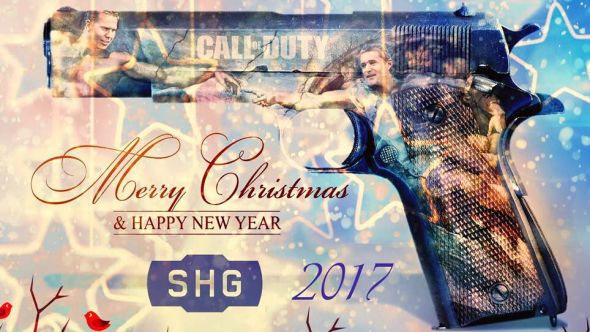 Sledgehammer games – the Activision-owned studio whose turn it is to make the next Call of Duty – tweeted a couple of interesting things over the holiday period. They have led fans to speculate that the next COD will return to the 20th century.

Where next for Call of Duty? We predict the future of gaming’s biggest shooter franchise.

On New Year’s Day, Sledgehammer tweeted the below, reminding us all – somewhat unnecessarily – that 2017 is their turn to ship a Call of Duty title.

It's officially 2017! Some call it the zodiac year of the Hammer. Have a safe and fun New Year's, everyone! #SHGholidays pic.twitter.com/24qlku6ITd

It’s all the clockwork in the background that has lit the fires of speculation. It’s not a massive leap to assume that the presentation holds some wider significance, given that everyone knows what Sledgehammer are working on this year anyway. The next assumption is that the low technology of clockwork, cogs and gears indicates that COD is returning to a more contemporary setting.

If you’re not convinced – and it’s definitely a bit thin – the tweet follows another, from Sledgehammer’s co-founder and studio head Michael Condrey. Sledgehammer have been holding an internal Christmas card contest, and on Christmas Day, Condrey chose to tweet the runner-up:

Merry Christmas everyone, hope your day is joyous. Did you see our @SHGames card: https://t.co/c2DvVXW5ju? Now, can you unsee our runner-up? pic.twitter.com/v0cY4TfllD

The pistol in the card is the M1911, which was the standard issue sidearm for many US soldiers from 1911 throughout much of the 20th century. Nothing “official” has been said regarding the significance of these two tweets, but taken together, it gets harder to dismiss either one of them as incidental. We should also bear in mind that last year, Infinity Ward hinted at the far-future setting for Infinite Warfare by tweeting an astronaut at New Year.

A return to the 20th century seems like a sensible choice. Since 2012’s Black Ops II took COD into the future for the first time, every instalment has had some element of sci-fi, whether that’s spacewalking in Ghosts or flying starfighters in last year’s Infinite Warfare, and fan fatigue has been evident for long enough for Sledgehammer to take it on board. Their last effort, 2014’s Advanced Warfare, received an at-best mixed reception for the changes to movement introduced by its exosuits, among other things, and Condrey himself said in an interview with DualShockers that Sledgehammer were listening. “Everything is on the table”, he said.

IGN Spain reported rumours last year that COD 2017 would head to Vietnam, and a ‘back-to-basics’ COD set in that iconic conflict – only partially tackled by the series so far – makes an awful lot of sense to me.

COD 2017 will release in the first two weeks of November this year. This hasn’t been officially confirmed or anything, but at this point, it has all the inevitability of the revolution of the Earth.