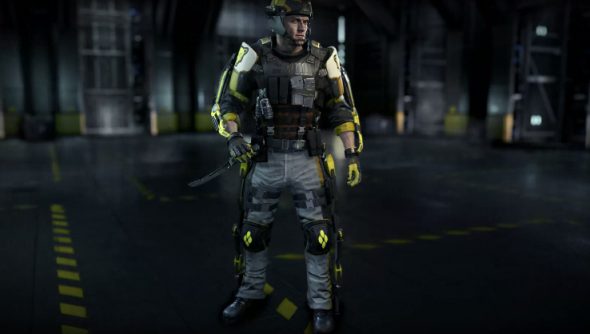 Call of Duty’s warfighting might be advanced, but that doesn’t mean it has nowhere left to grow. In their pursuit of lifelong learning, Sledgehammer will approve a new loot variety for the Advanced Warfare supply drop system and take some older gear out of circulation.

Coming to Xbox on June 9th and shortly afterwards on PC, the Legendary class begins life with the Sentinel CI gear set. Right now, there’s only one of those sets in existence – awarded to the game’s first ever Grand Master Prestige player – but it’s about to get ever so slightly less rare.

The set consists of eight pieces, and will be unlockable through supply and advanced supply drops. Each of its items will be highlighted purple in the armoury, to indicate that it has the highest-possible redemption value in the game.

Some older loot, meanwhile, will be withdrawn from the drop system. Weapons and gear marked for the Retired rarity class will no longer be found in supply and advanced supply drops – but will remain in players’ armouries and be available to use in-game. Redeem them after the June cut-off date, and you’ll never find them again.

“Think of this gear as being decommissioned,” said Sledgehammer, “and the rarity of these items will also be going up.”

Do you think you’ll be chasing these desirables on Advanced Warfare’s unusually bouncy battlefield?