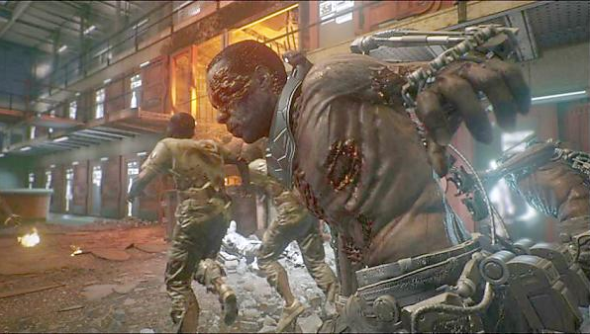 Sledgehammer’s pulling in the big stars for Call of Duty: Advanced Warfare’s first expansion pack, Havoc. The DLC pack comes with the first part of the Exo Zombies mode which has appearances from John Malkovich, Rose McGowan, Bill Paxton, and Jon Bernthal.

Microsoft have thrown money at Activision to get it released on their consoles a month before everyone else, on January 27, but we should be seeing it a month later on PC.

Havoc’s big sell is the first part of the Exo Zombies series. With each new Call of Duty the zombie mode’s become more elaborate. This time Activision have brought in the likes of John ‘Being John Malkovich’ Malkovich, Bill ‘Game Over, Man’ Paxton, Rose ‘Gun for a Leg’ McGowan, and Jon ‘I had to Google who this was’ Bernthal, making for a star-studded zombie romp.

There are four new maps – Sideshow, Urban, Drift, and Core. Which all sound like the could be part of the Dirt series. Except Sideshow. Unless it was about the incredible bearded car and its journeying carnival.

The icing on this DLC(ake) is a new assault rifle, the AE4-Widowmaker.

We’ll be seeing Havoc released towards the end of February.