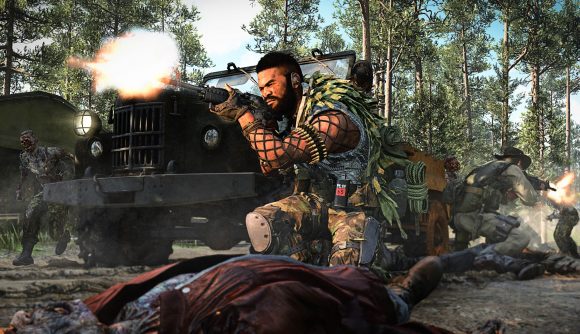 Call of Duty: Black Ops – Cold War‘s second season of content is upon us, and that means more modes and maps to mull around in. One of the most significant additions this time around is a zombies mode called Outbreak, an open-world, co-op spin on the classic formula. Instead of holding off waves of the undead, you and the gang will need to accomplish a set of tasks in whatever order you fancy.

However, things are rarely perfect on launch, so Treyarch Studios has pushed out a new Call of Duty: Cold War patch to smoothen out the experience. The developer has added various stability fixes for issues caused by objectives, jump pads, Kransy Soldat, and the Dragon Relic. Treyarch has also fixed a crash that may have occurred if you killed a Megaton HVT during the elimination objective.

There have also been some tweaks to Outbreak’s gameplay. You’ll now find that the eliminate objective no longer removes additional enemies between HVT jumps, which has been done to better balance difficulty with other Outbreak Objectives. Zombies will also have an easier time finding their way to the Holdout Objective. Issues with the Krasny Soldat’s flamethrower’s damage not working have also been addressed.

It’s not all about Outbreak, though. Treyarch has spilt the beans on some new modes coming to Call of Duty: Black Ops – Cold War this week. Rapid Fire Moshpit is a playlist for six-on-six multiplayer that comprises Team Deathmatch, Domination, Kill Confirmed, and Hardpoint on the game’s smallest maps. Dead Ops Arcade: First Person, meanwhile, is a zombies mode that puts a perspective spin on Dead Ops Arcade 3.

If you’re looking for some help with the latest Call of Duty game, then our Call of Duty: Black Ops – Cold War guns guide is a decent place to start. If you’re playing Outbreak, then be aware of a pesky bug that stops you from joining your pals. Thankfully, our sister site The Loadout has a CoD: Cold War Outbreak party bug guide to help you out.