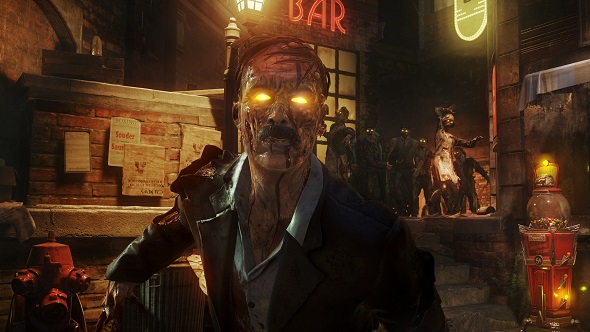 Update May 12, 2017: Activision have released a brand new trailer for Zombies Chronicles, overlayed by a wistful cover of an ’80s pop hit, such is the unwritten law for all trailers now. Man, I miss dubstep.

In other traditions, this Call of Duty DLC will be selling you stuff you’ve had before, remastering and reworking fan-favourite Zombies maps from across the Black Ops series.

If you’re one for mowing down hordes of the undead, check out this list of the best PC zombie games.

You’ll be able to play Nacht der Untoten, Verruckt, and Shi No Numa from World at War. There will be Kino Der Toten, Ascension, Shangri-la, and Moon from Black Ops. And from Black Ops 2, you’ll fight through a remastered Origins.

Expect fresh textures, better lighting, improved AI, and all that jazz. It’ll set you back $30.

Focusing on the eight remastered maps coming in Zombies Chronicles, this trailer has players flying through all of the old locales and recapping the overarching story of Treyarch’s Zombies campaign.

Due to the current exclusivity agreement Activision has with Sony, Zombies Chronicles will be available first on PS4 on May 16. It should then become available for PC users a month after, probably releasing sometime after June 16.

Sporting a fancy t-shirt with the new DLC’s title on it, the Treyarch co-studio head went ontoYouTuber JCBackfire’s channel. After making a surprise visit to the content creator, who produces a lot of videos involving the much-loved horde mode, he unzipped his hoodie in what can only be described as a pretty unique way to announce a game. You can check out the full reveal over at JCBackfire’s YT channel.

Original story May 1, 2017:As fans eagerly await the fifth chapter in Black Ops 3’s Zombies campaign, a recent post on the ESRB website suggests that the wait may be over soon enough. Named “Black Ops 3: Zombie Chronicles”, Treyarch and Activision look set to release a complete Zombies package, containing the base game and all five DLC maps.

First spotted over on the Zombies subreddit, the ESRB entry suggests that Zombie Chronicles is set to be a standalone release, similar to when games have special Game of the Year editions which include all previous DLC. Unfortunately, the description for Zombie Chronicles is exactly the same as Black Ops 3, giving fans no additional info on this complete undead collection. However, a previous leak from a Mexican games retailer earlier this month stated that Zombie Chronicles may include eight remastered Zombies maps from Treyarch’s history, complete with Black Ops 3’s Gobblegum machines added in.

ESRB game ratings usually go live a few weeks ahead of a game’s launch, so it’s fair to expect some kind of official reveal from Activision sometime in the near future. Activision did previously confirm that Black Ops 3 was to receive additional content during its last conference call, so Zombie Chronicles could be just that.

With Zombies fans already in full hype mode surrounding an ARG for COD: WW2’s Zombies mode, now seem a good a time as ever to unveil this complete collection for Black Ops 3. Expect a trailer for both Zombies DLC pack 5 and Zombie Chronicles within the not-too-distant future.