As dependable as the rising of the sun, Activision have arrived in November once again to deliver us a new Call of Duty. Infinite Warfare, from series creators Infinity Ward, is another triple-punch title, including campaign, multiplayer, and Zombies modes.

It looks pretty good to boot, but let’s not forget it’s a multi-platform game. How does it fare on PC, specifically? Let the PCGamesN Port Review Authority (that’s us) guide you through its nuts and bolts.

Note: unless otherwise stated, when creating port reviews of titles which include online modes, we stick to single-player modes in order to create repeatable screenshots that can be analysed at different graphics settings. That simply wouldn’t be possible in online matches.

Infinite Warfare is a very solid PC port held back a little by a couple of awkward niggles. Infinity Ward seem allergic to the idea of graphical presets this year. As with Modern Warfare Remastered, Infinite Warfare requires you to adjust every single one of its graphical options individually. 19 different settings, split into four categories, give you strong control over set up, but ensures adjusting graphical performance is an incredibly fiddly task.

Furthermore, changing the texture quality demands a restart of the entire game (a problem for many CODs going back years now), meaning it’s difficult to see immediate change in the most impactful setting. 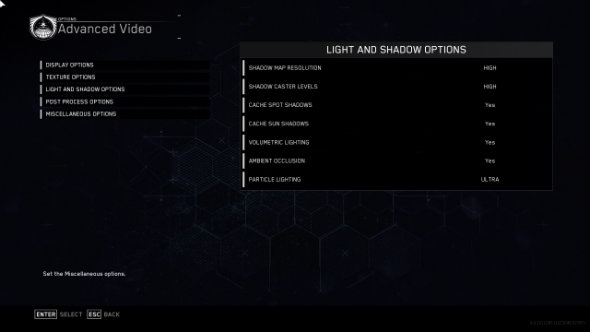 Frustrations aside, the ability to adjust things like shadow maps, particle lighting, and the variety of post processing effects demonstrates the game’s chops as a PC port. A FOV slider is present and correct, and you’ll find a full key re-bind screen in the controls panel.

Due to the lack of presets, we’ve had to create our own for this port review. For each one we’ll provide a basic overview of what settings were used. 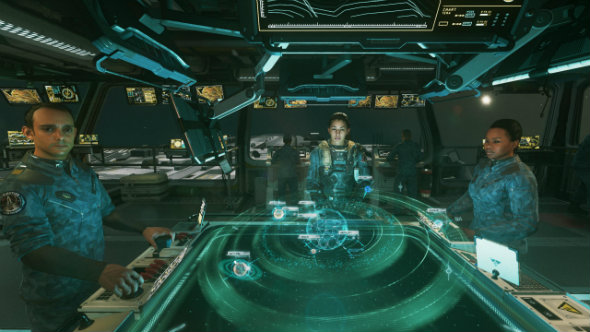 For our ultra test everything is as high as it can go. This means high textures, lighting set to ultra, extra, and high (there’s a illogical amount of variations on terms in COD’s menus), and antialiasing cranked to SMAA T2X. As you can see in the image above, these settings create a lovely, cinematic image that demonstrates the huge level of details in Infinite Warfare’s hardware. Switches and labels on the console look tangible, and the lighting effects on the hologram are nice and soft.

There are two distinct sides to how Infinite Warfare plays: on the ground in shootouts, and hurtling around in space dogfights. Both take a different toll on your system, so we’ve tested missions of each style at every setting.

Ground firefights: With the settings turned all the way up, expect to see the standard 60fps for the majority of the time. Intense battles can bring drastic slowdown though, with dips as low as 20fps being experienced, along with stuttering. Considering how COD battles typically flow, this isn’t going to be the best experience.

Space dogfights: At ultra, the vast emptiness of space means the framerate can soar. It mostly settles at 90fps, but highs of 110 and lows of 80 happen infrequently. 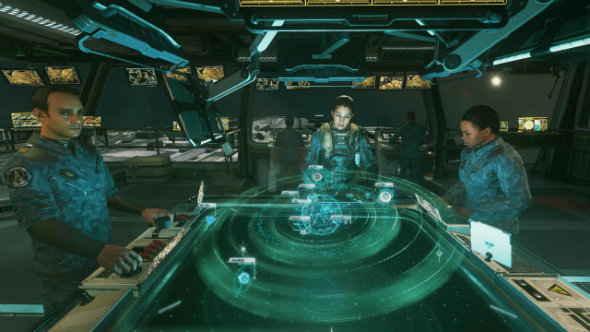 For our high settings test textures are reduced to normal settings, while most other options are dropped to their second-highest tier. All effects remain turned on, just to a lesser extent than in the ultra test. Antialiasing is switched to SMAA 1X. The result is an image that looks practically indistinguishable from the previous ultra screenshot. Once again the bridge of the ship feels heavily detailed, with hi-res images on the monitors, and a good hologram projecting from desk.

Ground firefights: By turning down the settings a touch you can maintain a very stable framerate. Intense battles flow at 80fps and rarely drop, and there’s none of the stutter experienced with the previous ultra settings.

Space dogfights: Up in the skies these settings perform at between 100 and 110fps without causing any of your vital components to overheat, explode, and leave you floating with no air. 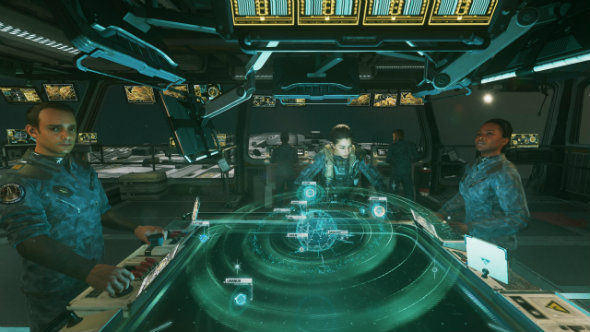 Medium settings require a few lighting and post-processing effects to be turned off (check the tooltip for the ones labelled ‘GPU-intensive’), and everything else adjusted to their second-lowest settings. This, confusingly, means textures are set to low, as there is a very low setting.

Impressively, these settings don’t make Infinite Warfare look shabby at all. The obvious reduction is in texture resolution. That hazard warning sticker on the right is now quite blurry, and the panel of switches underneath Gator’s hand on the left no longer looks raised, but flush with the rest of the console. The images on the monitors now looks heavily pixelated rather than HD sharp. Aside from that though it’s surprisingly solid. The characters remain pretty and the physical detail in the instruments is still present and correct.

Ground firefights: At this level you’ll find shootouts play at around 90fps, which is a nice jump up from the high settings. The blurrier textures probably aren’t worth that tradeoff since we’re operating at far above 60fps now, but personal preference will certainly come into play.

Space dogfights: Once again, being in the empty vacuum alleviates strain, with 110fps easily achieved. 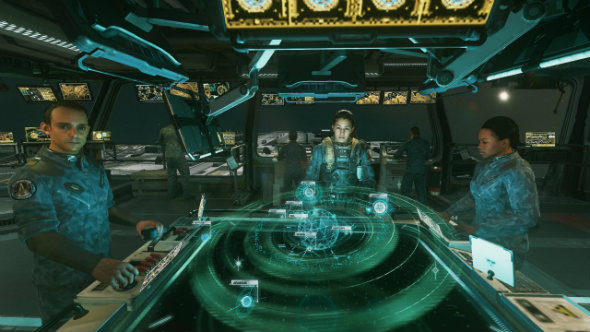 For the low test we dial everything down as low as they’ll go. That means very low textures, all toggle effects turned off, and no antialiasing. The effect is dramatic; Infinite Warfare instantly goes from looking fine to a touch on the ugly side.

The most obvious change is in the lighting; the soft glow of the ship’s instruments no longer bathes the surrounding area. The instruments themselves suffer from smeared textures and low-res monitor images. The hologram loses all its particle and lighting effects, robbing it of complexity.

Ground firefights: Without the need to process so many effects, your system is freed up to push those frames. You can expect to easily hit 120fps when fighting on planet surfaces.

Space dogfights: Another increase of ten frames can be won in exchange for dropping settings as low as they go. If you vitally need 120fps, then consider low. But the likelihood is that these settings are only to be used if you’ve got an aging or underpowered PC.

You’ll notice that in space dogfights all the setting variations allow for high framerates. As you’d expect, there’s less to render during these sequences. There’s debris, enemy ships, and asteroids, but for the most part you’ll be looking at basic black backdrops. The biggest impact is to the interior of your ship: you can see in the images below that on the lowest settings all the buttons and instruments sort of melt into the console due to the low resolution textures. The HUD also suffers, with the many, many indicators looking horribly pixelated. 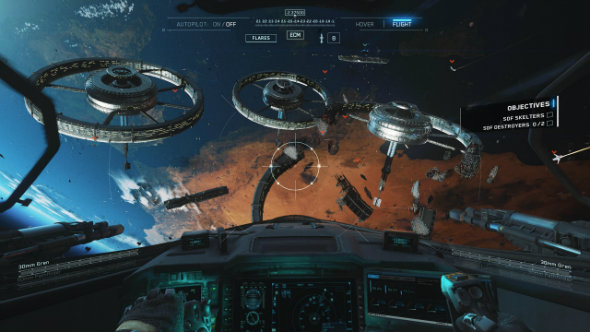 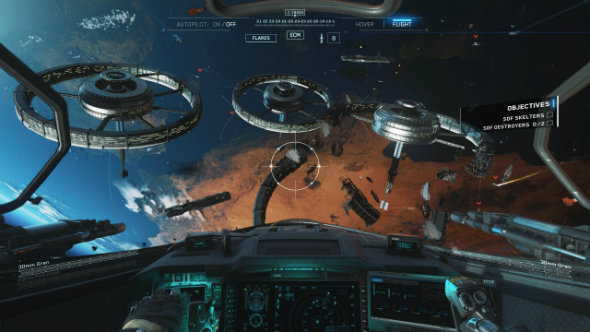 The difference between low and ultra is far more noticeable on the ground. The reduction in lighting quality means low looks incredibly basic, and without depth of field the ugliness can be seen at all distances. Infinite Warfare is often effects-heavy, with things like smoke, fog, and electricity in many scenes. You can see in these images just how that affects rain: at low it’s as if it’s raining icicles, whereas at ultra it’s far more realistic. 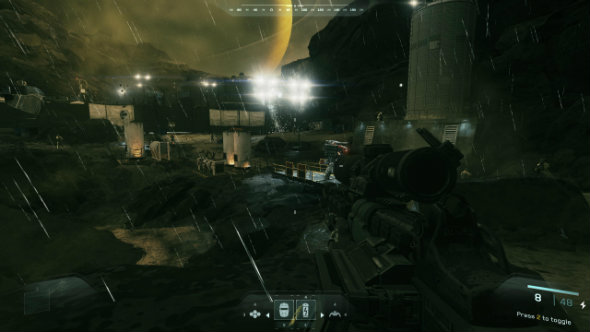 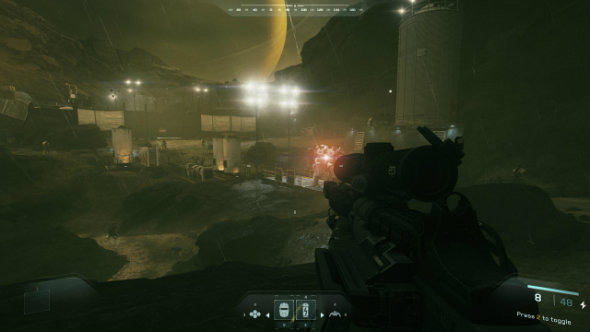 Infinite Warfare runs great on PC. With a multitude of categories in its advanced graphics menu, all bases are covered for people who want a good tinker. It’s only let down by being incredibly fiddly to set up. A single-click option will set everything to ‘optimum’ settings, which certainly takes some of the sting out of the process. But for advanced users, the constant need to reboot after changing textures is a real pain. Past the initial struggle though, it’s smooth flying for Call of Duty on PC this year.