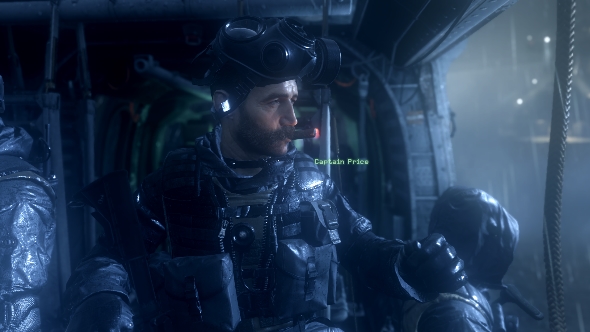 Infinity Ward revolutionised the FPS scene back in 2007 with Modern Warfare. The fourth Call of Duty game took a fairly popular shooter series and sent it soaring into the stratosphere. Now, nearly a decade later, COD4 is back for your enjoyment in the form of Modern Warfare Remastered.

Talking of great shooters, check out our pick of the best FPS games on PC.

Bundled as part of the Legacy Edition of Call of Duty: Infinite Warfare, Modern Warfare Remastered is a complete remake of the game that captured so many hearts and minds. The ‘remastered’ title belies the effort that’s gone into MWR; this is a proper ground-up remake, not a quick and dirty HD upscale.

As with all our port reviews, we’ll look at how well the game runs on various graphical settings. But due to this being a remake, we’ll also compare and contrast between the original game and the Remastered edition to show you just how much things have changed.

Note: unless otherwise stated, when creating port reviews of titles which include online modes, we stick to single-player modes in order to create repeatable screenshots that can be analysed at different graphics settings. That simply wouldn’t be possible in online matches.

The various teams that have come together to bring Modern Warfare up to date have done a magnificent job. In terms of structure it’s exactly as you remember, starting with the Kill House training level and progressing right into that classic ship assault. Little pieces of 2007 are present and correct; the HUD prompts to pick up weapons are identical, as is that bottom-centre compass.

But there are a multitude of additions that make it feel like a true overhaul. Just look at the difference between these two shots of the SAS armoury. 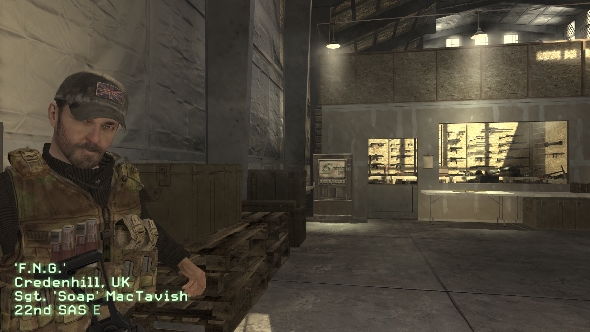 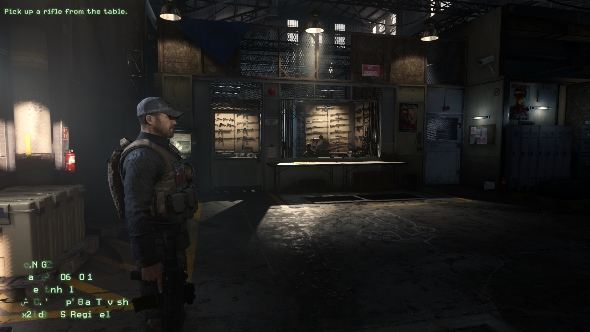 Beyond the obvious leap in models, textures, and lighting, there are plenty of new things to see in this area. The SAS logo painted on the floor, the chain-link fence on the catwalk, and the support pillar with attached fire extinguisher to the left.

At the weapons range we can see the levels of effort put into the new G36 model. The scuff marks on the plastic and the mouldings around the serial number and fire pattern select switch are heavily detailed. The bullets in the translucent magazine now look like physical objects rather than a flat image. Modern lighting techniques also make the range feel deeper, with the room itself looking a little out of focus due to Soap having his eyes on his rifle. 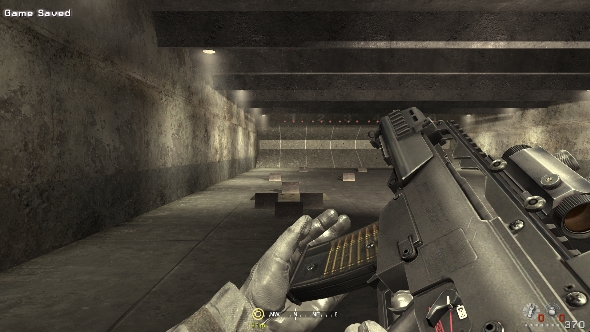 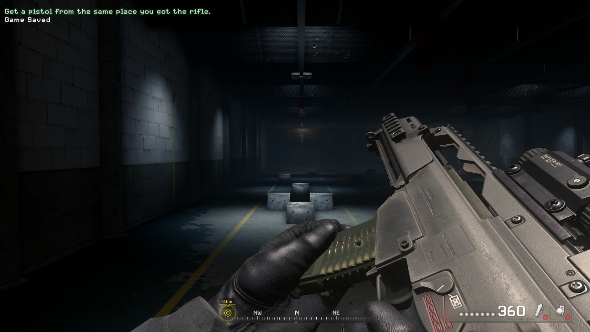 Upon exiting the range, the original game saw you walk down a fairly empty road to the training hangar. Now that road is busy with traffic; a tank rumbles past as you approach where Captain Price is waiting for you, and soldiers hang around the complex.

In the Kill House, once again a variety of new assets have been added to make the scene feel far more populated. The roofline of the building is more detailed, and there’s a new yellow platform in the background. Things like the wires and cable tidy on the floor make the environment feel far more used. The uniforms of Price’s squad have also been overhauled, although they’re still very faithful to the originals: both are using the same weapons as before, and the guy on the left even has his tan brown pistol holster. 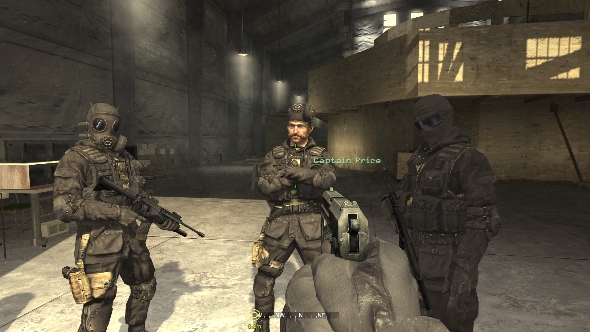 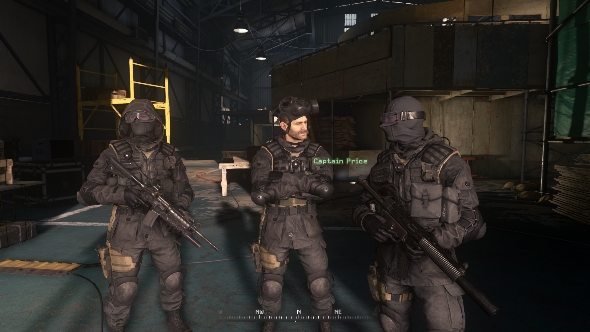 Modern Warfare Remastered is exactly how you remembered COD4 in all the right ways, and totally different where it needs to be. When people cry out for modern remakes of games, this is exactly the kind of fan service they have in mind. There are necessary changes: the weapons feel punchier and the audio is significantly better, meaning the game can stand toe-to-toe with shooters developed this year. But the wonderful pacing and exciting set pieces that wowed us all in 2007 remain present and correct. Returning to that boat assault is just as exciting today as you’d hope, despite such set pieces now being commonplace in games.

There’s more to be surprised about than the loving energy that has been spent on updating Modern Warfare, though. Take a look at the PC options in the menus and you’ll be taken aback at how many sliders and choices are available. This is not a quick port; it’s a proper PC shooter. 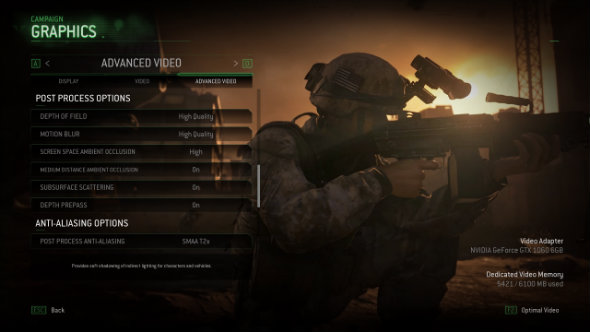 There are no less than 27 different options in the advanced graphics menu. These are split up into seven categories: Display, Texture, Shadow, Post Process, Anti-Aliasing, Shader, and Miscellaneous. Among these you’ll find selectors for things like subsurface scattering, depth of field, shadow maps, and texture resolutions. You can even choose what shaders are used in both cutscenes and in-game. It’s an incredibly robust offering.

There’s a very upsetting omission though. Nowhere in these multiple menus will you find a field of view slider. Unless you swap to the multiplayer component, that is, although it is only present on the in-match menu. It’s a baffling decision to not include such an important PC-centric option for the campaign, especially when many of the ones present are clearly aimed at harcore PC users.

Another awkward problem is the lack of graphical presets. Instead, you’ll have to strike the right balance for your PC by tweaking every single one of those 27 options. Many have low, medium, high, or extra settings, which are what we’ve used to replicate the presets we’d normally use for a port review. 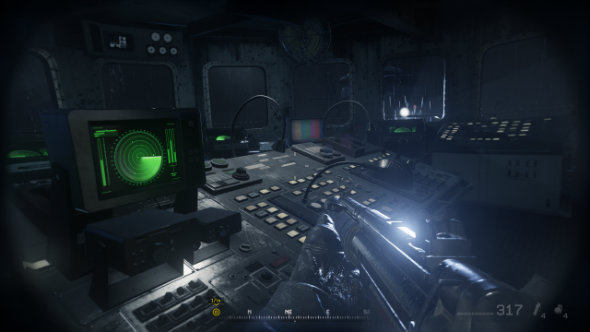 Starting with everything cranked as high as they will go and AA set to SMAA T2x, you can see the ship bridge looks rather pretty. There’s masses of detail in the switches on the desk, and that continues across Soap’s hand and his MP5. You can see raindrops that have settled across the top of the gun and in the creases of his gloves. The lighting is also lovely, with the source itself soft and natural, causing realistic reflections on metallic surfaces.

Our test rig ran these settings at anywhere between 100 and 140fps, with the highest framerates being inside the cramped corridors of the ship’s hull. As the action hit the deck things dropped by a dozen frames or more, but not enough to ever hamper the smoothness. 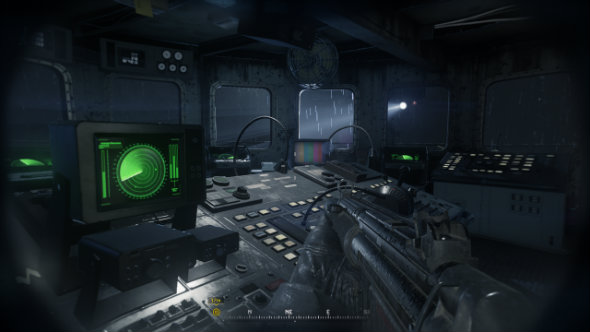 As we’ve come to expect in these port reviews, reducing the settings from ultra down to high makes little difference to the overall effect. Aside from the radar image on the monitor looking a little lower in resolution, the bridge looks identical to how it did on the highest settings. It’s not the biggest surprise; not every setting has an ‘extra’ setting, so there’s a lot of common ground between our ultra and high settings. SMAA has been dialed down to T1x though, for all the difference that shows.

In regards to frames, we saw the same areas of the ship fluctuated between 120 and 160fps, meaning the drop in quality does offer a small but sizeable gain. But at these kind of frame rates it seems silly not to take a ‘low’ of 100fps with every setting cranked. 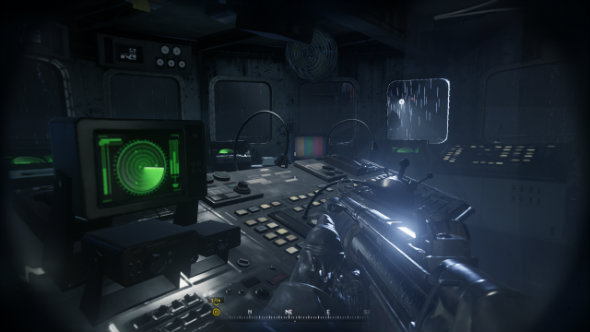 Medium (or ‘normal’ as the settings are sometimes called) is a drastic drop in quality. Here the complexity of the textures is almost entirely wiped out. There’s no grain to the leather of Soap’s glove, nor weave on the cuff of his jacket. Textures are duller, especially around the labels on the control panel. The lighting is also far less impressive, feeling somewhat last-gen. Rather than soft shafts of white, harsh light sheets emit from the outside helicopter searchlight, making things feel somewhat false.

In exchange for the drop in quality though, you can play at between 150 and 200fps. Aside from the detail drop you’ll also need to change the AA settings to FXAA. But if you’re happy to (or need to) dial back the effects to gain performance, then it’s very possible to pick up some extra frames. 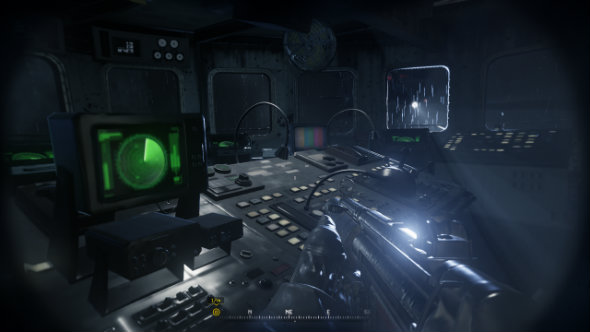 Our final set of settings drops down all scaling options to ‘low’ and turns AA off entirely. The result is an ugly image with smeared, muddy textures and incredibly basic lighting. The control panel looks particularly poor, with models of switches poking up out of what appears to be a sheet of metal soup. And, once again, the resolution on the radar monitor takes a hit, now looking more like an Atari game than a piece of military tech.

You will be hit 200fps easily though, and even being outdoors with longer draw distances only steals 30 frames from that. Realistically though, you’ll only be using these settings if your rig is seriously underpowered.

While Modern Warfare Remastered’s lack of presets makes setting it up for your system a little fiddly, it is an incredibly robust PC port. The missing FOV slider is a very stupid omission indeed, but will hopefully be added in a patch sometime after fan outcry hits the internet. Beyond such complaints though, the game is an great PC port that scales well and runs smoothly.