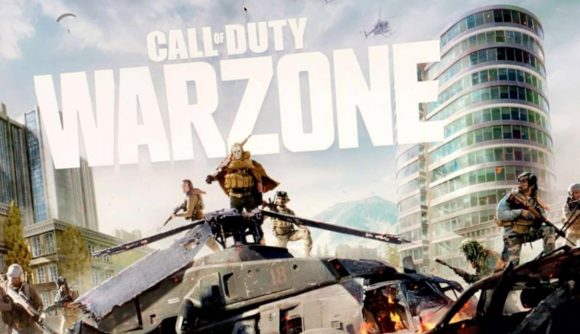 Call of Duty: Modern Warfare battle royale is coming – it’s just a matter of somebody at Activision or Infinity Ward actually confirming it. After some extremely specific teasers alongside the launch of Season 2, players have been able to glitch into the mode in various ways, and a mysterious piece of key art suggests that the mode will be titled Call of Duty: Warzone.

The art, which you can see above, first appeared in a now-deleted Reddit post (via Charlie Intel) made overnight. Key art of this sort could be easily faked, but once players began to circulate the image on social media, those images were taken down on copyright grounds. One Redditor says they received a notice from “Activision/Call of Duty” that this was a “copyrighted image containing key artwork for an upcoming video game Call of Duty: Warzone.”

This is all relatively solid indication that the Warzone name is real, and refers to battle royale. Ghost’s appearance in the image ties it closely to Modern Warfare, and the fact that a ‘classified’ option has joined that game’s main menu suggests it will be available inside Call of Duty proper.

Here’s where we enter much shakier ground. A rumour dating back to before Modern Warfare’s launch suggested that the game’s battle royale would also be made available as a separate, free-to-play client. A name like ‘Call of Duty: Warzone’ would certainly fit a project like that.

So apparently Battle Royale in #ModernWarfare will be a free mode to release in early 2020. It will be downloadable as a separate game, but also will still be connected to the core game. If this is true then it's a very good move by Activision.

Industry analyst Daniel Ahmad suggests we won’t have much longer to wait, either way.

Will be able to play soon enough. https://t.co/A1a6bEOnrk

There are loads of battle royale games out there, but Black Ops 4’s Blackout mode was an excellent take on the genre. Hopefully Warzone will follow suit.