Looking for the best Warzone loadout to secure the win in the new Call of Duty battle royale? Warzone has only been out for a short while but already it’s clear that the best way to secure a win is to create a custom loadout and grab it in-match via the Warzone Buy Stations and loadout drop option.

In case you’re new to Warzone and are just getting to grips with some of its curious additions – like the Gulag respawn mechanic – then loadout drops are a way of using your create-a-class setups from multiplayer in Warzone. Purchasing one of these will let you drop in your very own custom loadout almost instantaneously, meaning you can go from having a couple of common rarity weapons and some tactical gear to boasting two custom primary weapons of your choice, your favourite equipement, and even perks.

However, weapon balancing is very different in Warzone than it is in multiplayer, and your choice of perks, gadgets, and primaries will not translate perfectly to Warzone’s demands. We’ve earned a few wins already and are pretty confident that we have a well-balanced best Warzone loadout drop to help you secure your first W.

In terms of attachments, you really want to gear this towards fast aim down sights times and higher muzzle velocity to help combat bullet travel time. The thermal scope is great for identifying targets you wouldn’t normally spot and is especially handy for scouting out remote locations.

So why not the HDR? The HDR is best for long-range engagements as it’s bullet velocity is much faster, meaning you need to lead targets less and your shot will connect faster. However, the ARX-50 has a much, much faster cycle rate, making it the better option for prolonged sniper battles.

Great for close-range, but only capable of taking down a single fully-armoured enemy with each clip.

The basic idea behind this class is to ensure you’re effective at all ranges with the best SMG and sniper rifle in the game. The Proximity Mine is ridiculously effective at locking down corridors, staircases, and doorways in buildings – plus, nobody ever looks for them in Warzone. Finally, the Gas Grenade is really handy for stunning and slowing enemies so you can make an aggressive play.

One thing to note, the MP5 is fantastic at shredding enemies in 1v1 fights, but you won’t be able to take down more than a single armoured enemy before having to reload. That’s why we equip the Molotov Cocktail, so you can throw it down after securing the initial frag and buy yourself enough time to reload, re-armour, and go for the second or third kill. 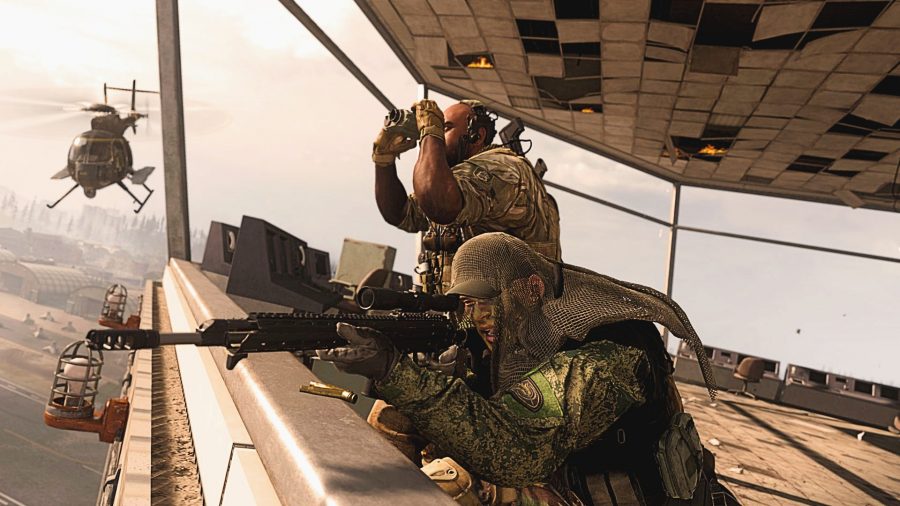 Once you have this one up and running, you’ll have a powerful sniper that excels in extremely long ranges

These three perks are quite a nifty trio to roll with as they suit most situations. Cold-Blooded makes it easier to sneak around as you’ll be undetectable by AI targeting systems and thermal optics. Overkill lets you carry two primary weapons, and Tracker allows you to follow enemy footsteps, which is great for battling in buildings. Your grenades offer versatility, too, allowing you to damage or escape – whatever the situation calls for.

You’ll want another loadout with Ghost as the second perk, so you can grab that near the endgame, if only to swap back to these weapons. The HDR is definitely better for landing long range shots than the ARX-50, and this build leans into that with the 26.9″ HDR Pro barrel, which effectively turns this into a hitscan weapon.

Not only does this one shred at short ranges, but using 5.56 NATO 60-Round means you’ve got enough high-damage rounds to wipe more than one armoured enemy without having to reload.

Best setup: Here are the best Warzone settings for PC

The NATO rounds don’t actually change your ammo type to AR either, so if you need to switch your secondary gun out to an AR then you’ve still got a nice, diverse loot pool.

Much like before, this is a handy sniper to have at your side due to its proficiency at range. Paired with the Thermal Sniper Scope, it makes scouting out foes that much easier, especially if you want to check you’re not wandering into a busy area.

This set-up works a lot like the one before it, the key difference being that you have a weapon that’ll allow you to play more aggressively. Having two builds like this in your back pocket can be quite handy, as it means you can swap between them depending on how you’re feeling in-game. The stuns are particularly important if you plan on pushing you’re enemies.

The Oden is hard to hit with and it takes some time getting used to its sluggish rate of fire, but it hits like a Mike Tyson right uppercut.

The quickest bolt-action sniper rifle that’s not technically a sniper rifle. The Kar98k won’t hit quite as hard as its pals, the HDR and ARX-50, but if you can hit your headshots it’s one of the most deadly mid to long-range weapons in Warzone.

If you’re going to emulate any gamer’s Warzone class then there are few better to copy than Shroud. His loadout drop differs substantially, but certainly appears to get the job done.

We’ve opted for a suitably aggressive third perk – Amped lets you swap weapons faster, which is great for aggro players. Likewise, the Molotov is great for finishing downed enemies and blocking off escape routes. Finally, if you push a lot, the stun is essential.

And there you have it, the best Warzone loadout drops. We’re always tinkering with more builds, so we’ll be sure to update this if we come across any more set-ups that are worth your while. In the meantime, go get some!