Earlier this week, a big leak of Call of Duty: WWII content came our way thanks to datamining of the recent PC beta. Sledgehammer have since addressed the leak, and provided a glimpses of a new map and mode for the game.

These are the best WW2 games on PC.

The new London map appears to be set during the Blitz, in a warehouse district turned air raid shelter. “It’s a studio favorite for domination, hardpoint, and TDM, and we think it could be a standout for the competitive season ahead,” Sledgehammer’s Michael Condrey tells COD fansite Charlie Intel. “Also, it’s a lot of fun for the new Gridiron game mode coming at launch.” 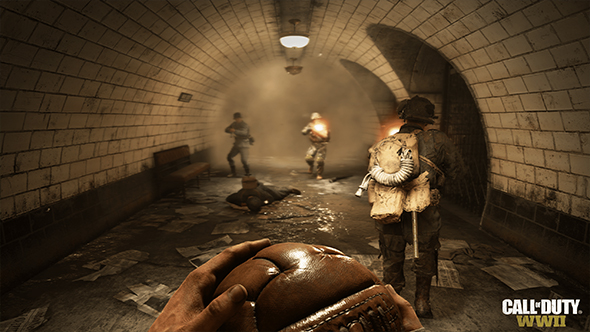 That new Gridiron mode is described as a “boots on the ground” version of Uplink from previous COD games. Uplink had players bringing a satellite drone to the opponent’s station, scoring points by either tossing or carrying the drone in. Gridiron looks to replace the drone with a football, really bringing home that sports metaphor.

Call of Duty: WWII will be bringing the series back to its world war roots November 3.