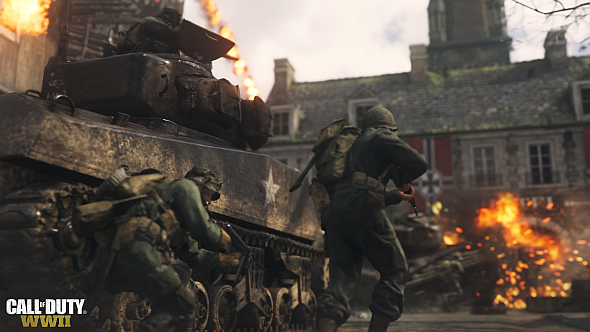 Another year, another COD, and this time the big angle is we’re going ‘back to its roots’ with our ‘boots on the ground’, and all that. Is there anything worth finding, back at said roots? After a go on COD: WWII’s multiplayer at E3, here’s what I reckon.

For all the details all in one place, here’s everything we know about COD: WW2 so far.

First of all, let’s acknowledge that however much Activision say COD’s changed, some things will always stay the same. It will always run at 60fps. Times-to-kill and respawn will always be faster than any of its peers, and the action will be constant. Perks, streaks, and a ranking system seem equally immutable since their introduction in 2007’s seminal Modern Warfare. None of this has gone away.

Boots on the… and so on 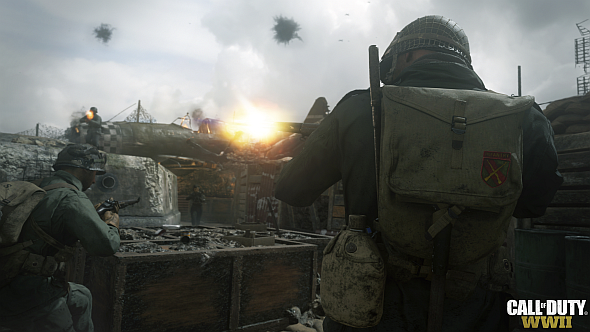 Activision’s soundbites show they’re aware of COD: WWII’s biggest selling point, and the return to the 20th century is indeed welcome after almost ten years of modern or futuristic settings. Gone are Infinite Warfare’s pristine corridors and Black Ops III’s absurd candy-coloured water parks: my first game is a team deathmatch in the debris-strewn trenches of Pointe du Hoc, and hey, it actually looks like a place where a war has been fought.

Interesting lines of attack are opened up through verticality, cover, and level geometry. Hip-high obstacles – crates, rubble, hay bales – are all over the place, and offer more opportunity to cover your body than we got in Infinite Warfare. Trenches skew at odd angles, and I’m able to survive a couple of exchanges by staying near a corner and retreating out of harm’s way. Then I’m promptly killed by someone firing into the trench from above. Braving No Man’s Land like this provides a high-risk, high-reward way of escaping the three-lane structure that prevails in recent CODs.

Yet such options might be rarities, judging by my next game. It’s a bit of Domination, in a snowy patch of the Ardennes forest that would be beautiful if not for all the craters. The vertical plane is broken up by trees and pieces of a bombed-out church, and there are as many obstacles for cover as in Pointe du Hoc. It differs in that there’s no upper level offering an escape from its three lanes, and for all that it appears to be open, I find myself channelled into the same these lanes time after time. Further in keeping with COD tradition, both it and Pointe du Hoc are relatively small.

So there’s more cover, and we’ve dispensed with the silly wall-running and wacky special powers, but most of COD’s other hallmarks are still here. The usual low skill ceiling has been raised, but only a bit.

Which is what makes the new game type, War mode, so interesting. Clearly inspired by objective-based modes in Wolfenstein: Enemy Territory and its many imitators, the maps are much larger, and broken down into several stages. There’s even a semblance of a narrative linking your objectives, conveyed in briefing videos like this:

I’m assigned to the Axis powers on Operation Breakout (the map in the above video), which makes me one of the defenders. As the Allies advance, the flow of the game changes, which is a bit new in COD. The game begins with a fight over a manor – it’s fairly chaotic, thanks to a small front yard with several lines of sight – but the Allies’ next goal of repairing a bridge funnels both teams into a more direct clash at a choke point. The third objective is an ammo depot with a sprawl of alleys and buildings between it and the Allies’ spawn, creating a very different pace than the fight for the manor.

Ultimately, we hold them off at the last hurdle, frantically defending an anti-aircraft battery behind a church. We get the cover and the defensive positions, they get a tank. It’s tense stuff as the timer ticks away, and an exciting cap on a match that’s felt subtly different at each stage.

As a series, COD sells itself on its action and excitement. But no matter the game mode or the loadout I play, the pace seldom varies. It’s not unexciting, but it’s often monotonous; War mode finally varies that monotone, and one of the implications is that I can see a real argument for changing classes as the rhythm of gameplay shifts. In most recent CODs, I generally only switch off of assault rifles or SMGs out of boredom, rather than necessity. 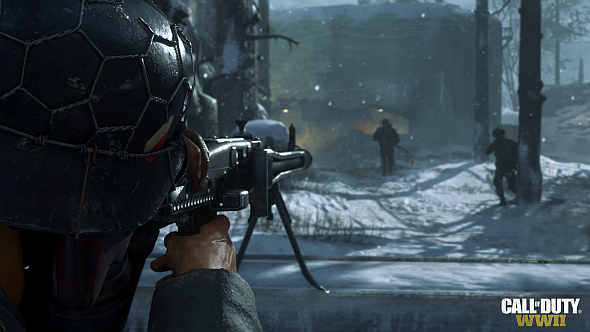 Speaking of classes, let’s discuss their new structure: Divisions. There are five Divisions, each with two slots, where you’ll clearly be able to save your customised soldiers (though I wasn’t able to edit them in the build I played). The Pick Ten system has been scrapped: weapons, equipment, and all perks are now determined by your Division. Essentially, it extends Infinite Warfare’s Combat Rigs to guns and gear, then streamlines it.

Your soldier has at their disposal a primary and secondary weapon, some equipment, a Division skill, Division training, and Basic training, with some of these choices restricted according to the Division you play. Since I couldn’t edit them, I can’t say exactly how, but it looks like Infantry get rifles, Airborne gets SMGs, Armoured gets LMGs and rocket launchers, the Mountain Division are your snipers, and Expeditionary gets shotguns and spades. Division skills provide active abilities – like the Infantry’s bayonet charge, or Airborne’s ability to fit silencers – while training provides passive perks, like the Infantry’s Hunker, which reveals enemy equipment and reduces incoming explosive damage.

It’s an improvement on Infinite Warfare’s cacophonous mix of Rigs and Pick Ten, being both neater and suitably evocative of World War Two, but it’s hardly revolutionary. Check out our guide to COD’s Divisions if you’re after more detail. Oh, and scorestreaks are back – they’ve got a WWII skin, but are functionally identical to the ones you know. Recon UAVs are now recon planes, there are care packages, the most expensive streak is a bomber you can shoot out of, et cetera.

All the change we can expect 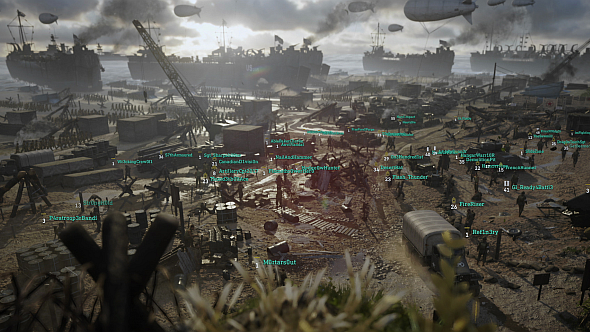 The last and arguably biggest change to COD’s multiplayer is one I’m not shown: Headquarters. This will be a social space where you’ll chat and emote with other players, pick up daily challenges, hone your skills in the firing range, and Prestige in a big ceremony with the general – a chance to show off a little. Inspired by World of Warcraft’s Orgrimmar, I have to wonder if COD really needs it, but it’s a significant new feature regardless. Click here for what we know about it so far.

COD previews inevitably focus on whether it’s any different this time around, and I often feel like they overstate the changes every year because you don’t want to read an article that says “hey, it’s more COD.”

Well, COD: WWII is more COD. When the Modern Warfare formula has done so well for the franchise, there’s only so much change we can expect. Simplifying Divisions, stripping out wall-running, and returning to WWII are all welcome, but the underlying gameplay is the same.

To the extent that COD ever does anything new, however, Sledgehammer seem to be the guys who do it the most, out of the franchise’s three rotating studios. Their last offering – Advanced Warfare – was the most transformative for a while, thanks to those divisive jetpacks. In HQ and War mode, it looks like they’re offering something almost as radical this time round, but only for a given value of radicalism.