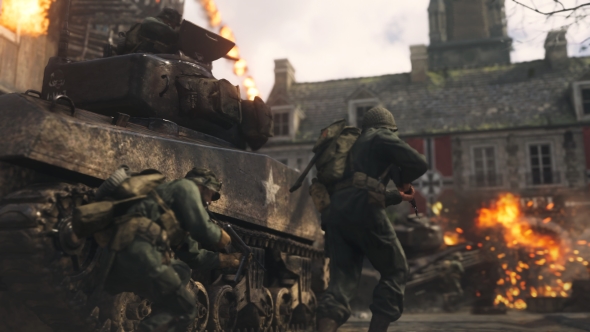 Create-a-Class. Pick Ten. Rigs. There have been many names for the class system in COD multiplayer across its various yearly updates. COD: WW2 Divisions is the latest incarnation and thus carries a shiny new name, but the approach is largely the same: a set of distinct class archetypes that can be moulded with different weapons and perks. Confused? Well you’ve every right to be, frankly, but let our COD: WW2 Divisions guide show you the way towards enlightenment and a marginally less embarrassing K:D in one of the best World War 2 games on PC.

So little time, so many ways to frag things – here are what we think are the best FPS games on PC.

When creating a new soldier in multiplayer, you have a choice of five COD: WW2 divisions. Each is split into several core components: division skills (an active ability that you can use in battle), division training (passive abilities that shape your role on the field), basic training (selectable perks that further define your role), and the selection of weapons your chosen division excels with. 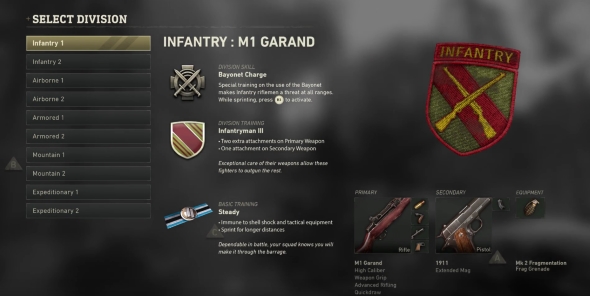 The Infantry division is all about well-rounded attacking. Equipped with rifles such as the chunky automatic BAR or the self-loading M1 Garand, Infantry are able to lay down fairly accurate, sustained fire at most ranges. Up close, their core skill allows them to charge down opponents with a fixed bayonet. Infantryman training means this division can apply attachment mods to both primary and secondary weapons, granting increased granular control over their arsenal. This COD: WW2 Division is all about pushing the objective and racking up kills.

Special training on the use of the bayonet makes Infantry riflemen a threat at all ranges.

Exceptional care of their weapons allow these fighters to outgun the rest.

Dependable in battle, your squad knows you will make it through the barrage. 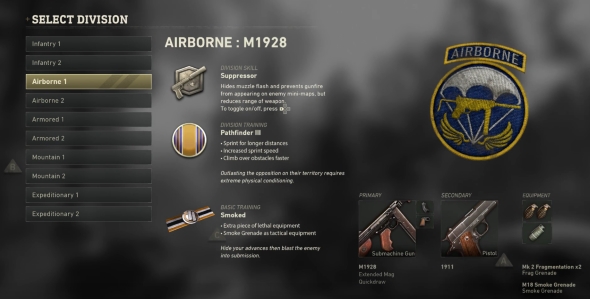 Favouring rapid movement and fast-firing submachine guns, the Airborne division is Call of Duty: WW2’s answer to a traditional assault role. They are a little stealthier than your classic run-and-gunners, though, thanks to the optional suppressor provided by their division skill. Combined with their training, which allows them to run faster and for longer, the Airborne COD: WW2 Division is the best class for swift, unseen map traversal.

Hides muzzle flash and prevents gunfire from appearing on enemy mini-maps, but reduces range of weapon.

Outlasting the opposition on their territory requires extreme physical conditioning.

Hide your advances then blast the enemy into submission. 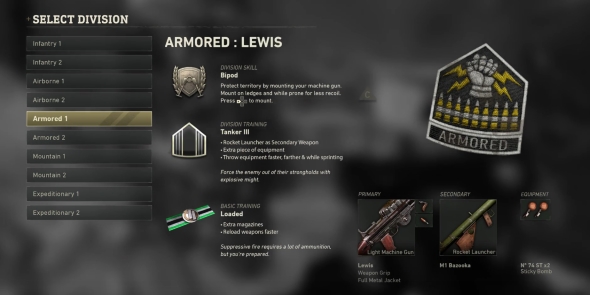 The Armored COD:WW2 division may not come outfitted with a tank, but they are the beefiest option. They’re the class that hauls light machine guns and rocket launchers onto the battlefield, and so are the natural option for those looking to pack a loud, messy punch. Thanks to the bipods provided by their division skill, they can easily set up a solid defensive position and hose down enemies with relentless suppressive fire.

Protect territory by mounting your machine gun. Mount on ledges and while prone for less recoil.

Force the enemy out of their strongholds with explosive might.

Suppressive fire requires a lot of ammunition, but you’re prepared.

Confidence in your weapon means that you never let it leave your eye. 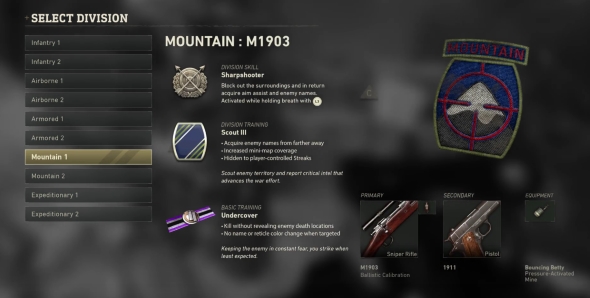 Say hello to the Mountaineers, COD: WW2’s sniper division. Their scoped bolt-action rifles make them great long-distance riflemen, although every pull of the trigger needs to count due to the slow cycling of rounds. Their division skill makes scoring perfect shots a little easier thanks to aim assist, and they are able to see the names of enemies from farther away thanks to their class specialist training. Of all the COD: WW2 divisions, the Mountaineers will likely be the trickiest to get frags because of the searing pace of COD multiplayer.

Block out the surroundings and, in return, acquire aim assist and enemy names.

Keeping the enemy in constant fear, you strike when least expected.

The latest supply shipment may never arrive, but that doesn’t concern you. 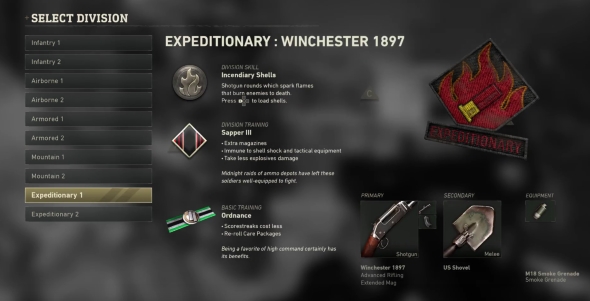 If you like your combat close and personal, the Expeditionary COD: WW2 division is for you. You’ll need to quickly close the distance between you and your target if you want a round from your shotgun to deal the killing blow, but get in range and the Incendiary shells certainly do the business efficiently. Expeditionary training allows their soldiers to carry more ammo and take less damage from explosions, and the right perk will even allow them to re-roll unwanted Care Packages.

Shotgun rounds which spark flames that burn enemies to death.

Midnight raids of ammo depots have left these soldiers well-equipped to fight.

Being a favourite of high command certainly has its benefits.

Few soldiers treasure their side arm like you do.