It is hard not to look at Call of Duty: WWII as anything other than an attempt to repeat past glories. The 14-year-old series found its feet telling war stories from the bloodiest conflict in human history and, after a lengthy hiatus jetpacking around space and solving the JFK assassination, it is finally making its homecoming.

But the series has ballooned in popularity, swollen in size, and changed a great deal mechanically since we first parachuted behind enemy lines to give the Nazi war machine a pasting. That clash of old and new was always going to be the biggest obstacle facing developers Sledgehammer Games. It is a good job, then, that they have struck a near-perfect balance. For the first time in years, I am daydreaming about campaign set-pieces, waves of Nazi zombies, and scorestreaks. 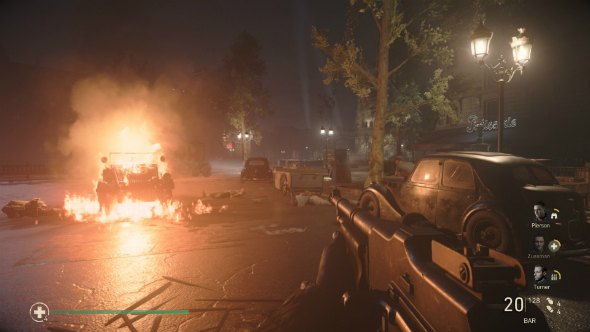 The campaign starts off with perhaps the most iconic battle of the Second World War, the Invasion of Normandy. Everything here has been seen before: the slow and steady creeping of artillery fire as you and the rest of your squad nervously chatter away your anxieties in a landing craft; the moment the doors open and everyone in front of you is torn to shreds by machine gun fire; diving into the water to safety, the crimson tint of the sea foam; emerging into a wasteland of death and errant limbs, stupefied by the horrors unfolding around you; being ordered to snap out of it by your sergeant; and, finally, charging toward the beach wall and breaching it.

Later on you are clearing out bunkers along the cliffs of Normandy, barreling through corridors with your stalwart M1 Garand, lavishing every spent clip for the nostalgia-inducing ring that accompanies each reload. This is all gold-standard campaign fare, regardless of how many times we have done it before in games like Medal of Honor: Allied Assault and, indeed, Call of Duty 2. The sense of being up against overwhelming odds, the sheer scale of devastation, and the patient pacing of WWII’s Normandy mission all hit the mark, making you feel like one of the innumerable soldiers falling around you rather than an invulnerable hero.

However, where the mission should crescendo, it instead comes crashing to a frustrating halt courtesy of an exasperating quick time event (QTE), which is quickly followed by a tedious set-piece in which you drag a wounded comrade to aid, stopping every few seconds to shoot some bad guys who conveniently show up in manageable clusters of three. 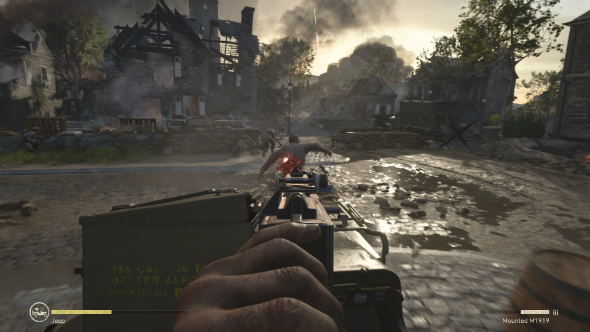 This frustrating rhythm repeats itself in subsequent missions with varied results. Providing sniper support from a bell tower makes for a suspenseful set-piece. But I could do without the QTE that plays out moments later when you are forced to escape the collapsing structure, moving your mouse and smashing the F key to dodge a tumbling church bell. Forced spectacle is very much the flavour of WWII’s opening few missions. It does not help that the campaign wastes its first few missions lurching from place to place with no tangible goal in sight – it feels a little rushed and aimless.

Fortunately, when the campaign hits its stride it is an engrossing and surprisingly tender tale of the bonds that form between brothers in arms. Moreover, after its clumsy opening, the bombastic QTEs and chase sequences fall by the wayside, replaced by fierce and claustrophobic gunplay. The explosive surges are still there, but the campaign has the confidence and audiovisual fidelity to let off its most dazzling fireworks without suspending you in the safety of a scripted sequence.

The campaign’s narrative, much like its gameplay, takes a while to grow in confidence, opening with dramatically overwrought speeches and monologues about eternal glory and sacrifice that come across as flag-waving. Your fellow squad members and leaders all fit into tidy clichés too: Zussman, the wiley rogue; Stiles, the spectacled smart guy; Aiello, the country bumpkin emboldened by his uniform; Pierson, the tough sergeant who is never satisfied; and Turner, the sympathetic lieutenant who would risk life and limb for his men. 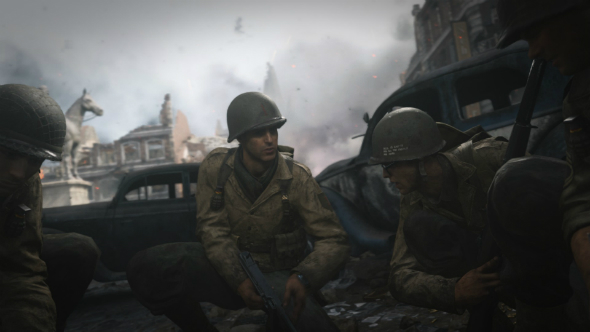 Only Pierson and Turner gain much in the way of nuance as the story advances, but you do grow attached to your brothers in arms, partially through familiarity amid the horrors of war, but also out of practical necessity. Each character has a special ability that is tied to a cooldown: utilities like health packs, grenades, and ammo, as well as more luxurious assists like highlighting every enemy in the area and calling in mortar strikes. To get any of these benefits however, you have to seek out the right squad member, aim at them, and hold your N key. Admittedly, this can be frustrating and ungainly during the heat of battle, but that is the point. This is not a Call of Duty campaign you can lone wolf; you need your squad members. Barreling through a trench with a shotgun only to find you have isolated yourself from your medic is a striking way of establishing an organic bond between you and your squadmates.

Of course, needing health packs is a rather new (or old, depending on when you joined the series) conundrum. WWII eschews the regenerating health bar of most modern shooters and makes you to seek out first aid kits from around the environment, or from Zussman, your squad’s medic. What at first feels gimmicky and obtuse quickly becomes immersive, forcing you to keep your squadmates close by and adding to the chaos and confusion of firefights by making you find the right comrade. By far the most welcome campaign change is that you are no longer the only soldier capable of advancing on the enemy, which, when combined with the inability to magically heal over time, makes you feel like a part of a unit rather than an invulnerable hero.

This is also the most visually and aurally accomplished Call of Duty to date, boasting some of the most deafening and bassy explosions around, not to mention a medley of particle effects. Both combine in a humbling manner when your squad comes under heavy shelling during the Battle of the Bulge. Branches tumble to the forest floor, exploding tree trunks pepper your vision with debris, and an audio barrage of creaking boughs, thunderous explosions, and some gut-wrenching screams underpin the inhumanity of conflict. 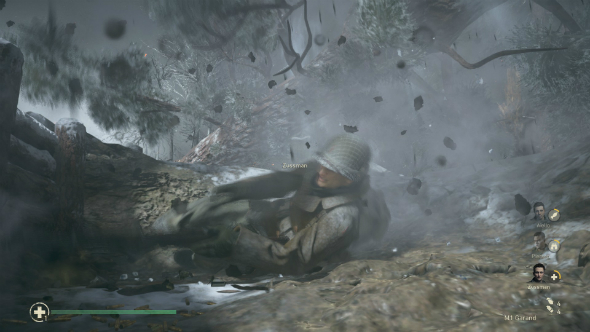 Over in multiplayer a lot of the filmic sheen is lost in the pursuit of a pristine frame rate, but the sense of brotherhood and chaos remains thanks to two key additions: War and Headquarters.

War is an objective-based, attack/defend game mode that takes place across three stages, the attacking team only claiming victory if they can complete all three tasks in the allotted time, the defending team doing everything in their power to halt the advance. War places the emphasis on the objective: there are no scorestreaks, it does not matter how many kills you get, and there are no ways to get behind the enemy’s spawn point. War cultivates clutch moments and last-ditch attacks by making victory a matter of all or nothing, and in the few hours I have spent with the mode I have been on both the right and wrong side of climatic, last-gasp rushes. I have literally cheered – awkward fist pump and all – upon realising it was the bomb I planted that won my team the round. Likewise, coming to terms with the fact that my team lost because I missed a single headshot is a bitter pill to swallow.

Despite there only being three maps for War, each one is bespoke and suits the game mode perfectly, offering up enough variety in terms of objective types to ensure the playlist will not get stale for a while. The highlight is Operation Neptune, which successfully adapts the D-Day landings into a multiplayer mode, one team occupying two clifftop bunkers, pouring MG fire down onto the beach below as tides of NPCs charge forward, the actual enemy players hidden among them. It is the closest Call of Duty’s multiplayer has ever got to the spectacle of its campaigns, but it is also the first time in the series’ multiplayer modes that teamwork, tactics, and objective play have taken precedence over K/D ratio. 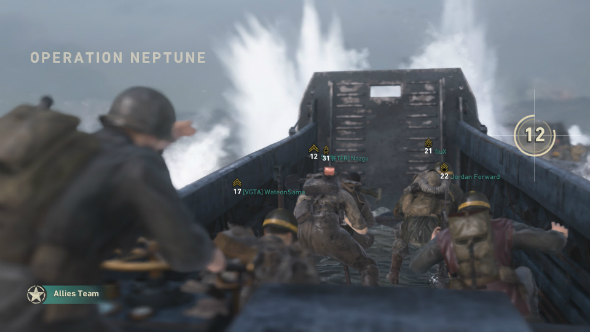 The other major addition to Call of Duty: WWII’s multiplayer, Headquarters, serves as a social space akin to Destiny’s Tower. It is exactly the sort of area that makes this year’s iteration of Call of Duty multiplayer particularly hard to switch off, offering a number of addictively simple activities like a shooting range and pit for duels, which other players can watch from above. You can also open your Supply Drops (read: loot boxes) in Headquarters, acquire daily and weekly challenges, buy cosmetics, and, of course, listen to your fellow man hurl insults at one another – whoever thought unmuted mics was a sensible default for this area has lived a sheltered existence.

While Headquarters seems like an unnecessary bolt-on at first, spending a bit of time running around, duelling, and watching others open Supply Drops offers a welcome respite from the searing pace of Call of Duty: WWII’s myriad multiplayer modes. You can easily lose an hour milling about this social hub, forming temporary bonds with players after a bazookas-only duel in the pit or becoming inexplicably mesmerised after watching someone open a seemingly endless run of Supply Drops. After a little rest and relaxation you should be ready to dive straight back into all the usual modes: Domination, Hardpoint, Kill Confirmed, etc.

Call of Duty: WWII offers an endearing, moreish, and fast-paced multiplayer experience that sees the series dialled back to one of its purest incarnations since Modern Warfare. The near-recoilless gunplay and stripped-back movement options have me feeling right at home – something I have not been able to say since World at War. Changes to the Create-a-Class system change little in reality, offering a more rigid take on the addictive progression loop of weapon, attachment, and ability unlocks that has become synonymous with the series. 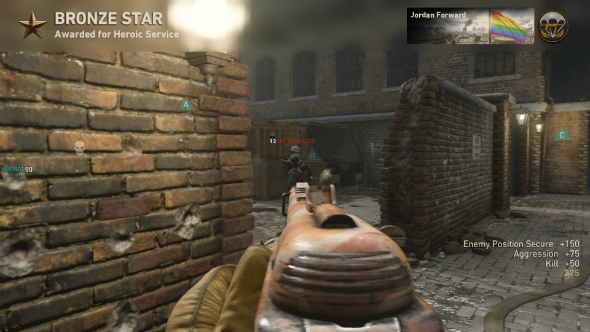 Completing the triumvirate of game modes that is each year’s Call of Duty release is the refurbished Zombies mode. Anyone familiar with the Zombies modes of previous Call of Duty entries will struggle to identify any sweeping changes here in terms of the gameplay: you start with a pistol, kill endless waves of Nazi zombies, each one increasing in difficulty, and use the points gained from slaying undead to buy weapons, perks like higher damage, and unlock new areas.

Zombie-specific Supply Drops containing useful one-use items like flamethrowers and self-revives make the notion of jumping straight back into another round a little more enticing, while also rewarding players who want to invest innumerable hours into Zombies with some worthwhile rewards. There is also character progression between Zombies matches, making this feel less like a side note and more like an integral piece of the annual Call of Duty experience. With two maps and no major gameplay additions though, this is very much the Zombies you know and love, presented with better visuals, some new settings, and more easter eggs waiting to be unpicked by dedicated fans. For most players, however, Zombies is simply an addictive horde mode to be enjoyed with a squad of friends.

As a whole package, Call of Duty: WWII has a little something for everyone to enjoy, but that has been the story of this series for a long time. No, this homecoming is far, far better than the sum of its parts, a true return to form in practically every respect. It feels alien to be looking back on a new Call of Duty release as anything other than enjoyable yet unremarkable triple-A fare, but here we are. Call of Duty: WWII delivers on all fronts: compelling and heartfelt in its storytelling; imposing in its sense of scale and spectacle; and unremittingly addictive in its gunplay.