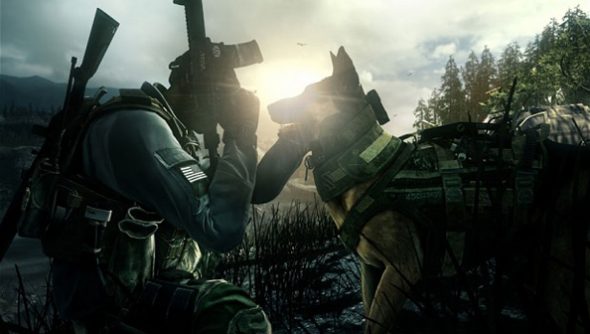 Call of Duty: Ghosts is out, and the rails are running as they normally do. The super-fans are tucked up in bed, recovering from their midnight excursions. Everybody at Activision HQ has found a copy on their desk, as tradition dictates. And in a couple of days, the publishers will have announced that Ghosts had the biggest launch since the HMS Really Very Large.

But the new Call of Duty is quietly sinking on Steam.

Call of Duty: Ghosts’ single player peaked at just under 14,000 concurrent players at launch on Steam this week, and its multiplayer at 35,000. By contrast, Black Ops II’s single player topped 18,000 players in its first four days, and its multiplayer pushed beyond 50,000. That’s discounting Black Ops II’s Zombies mode, which runs in a separate executable and accounted for a further 7000 peak users in the same period.

The dip starts to look like a slide once you return to the launches of Modern Warfare 3 – 45,000 for single player, 80,000 for multiplayer – and the original Black Ops in 2010. Black Ops’ multiplayer peaked at over 95,000 concurrent players during its first four days after launch, and its single player pulled in 60,000 simultaneously.

There are three conclusions to be drawn, then. First, that single player Call of Duty has been all but abandoned by Steam users over the last couple of years. Second, that PC gamers are increasingly apathetic in the face of yearly CoD releases. And third, that Ghosts is a bit bum.

The metascore for Ghosts’ Xbox version currently sits at 74%, nine points below its predecessor. What’s more, its PC version is hamstrung by technical missteps: a missing FOV slider, frame rate issues even on the highest end machines, and a bizzare requirement that your machine has six GB of RAM, despite using less than two. We have Fraser playing it now, and first impressions are not good. For reasons why, maybe look to the upcoming consoles – a further two games for Infinity Ward and co. to develop alongside the usual three.

You might also conclude that Battlefield 4 has taken a serious bite out of CoD’s PC playerbase, despite its own catastrophic launch. But without figures easily available from Origin, we can’t know for sure.

What we do know is that Ghosts hasn’t turned out quite right. And though the console figures might tell a different story, PC gamers are losing interest.

How about you lot? Have you picked up Ghosts yet?