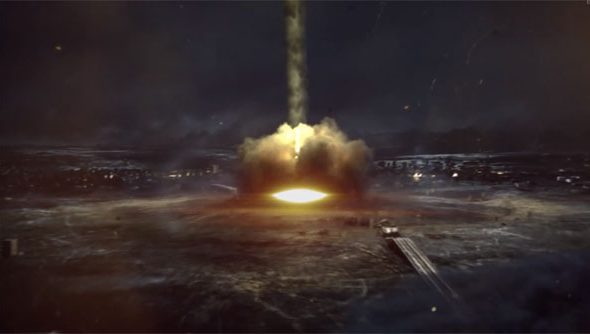 Yesterday we learned precisely what it is that’s going to devastate America and enable Call of Duty: Ghosts’ oppression fantasy. Thunderbird 5 will be turned against its public, a new trailer revealed, lighting up the US with Zeus bolts that’ll leave only dogs and men with balaclavas fused to their faces in its wake. And then the nasty men come to take away the homeland.

Amrich points out that concept of kinetic bombardment have been within the remit of sci-fi writers for years. Robert Heinlein, Larry Niven and Neal Stephenson have all drawn on the ‘Rods from God’, as the defence and scientific community have affectionately nicknamed them.

What’s more, it’s been “seriously considered” by the US Air Force as a fallout-free alternative to nuclear warfare. Always nice to know what they’ve been up to, isn’t it?

“In fact, long after IW had committed to the concept for Ghosts, a thread about the USAF’s Project Thor showed up on Reddit in May of this year, which simultaneously made people involved in CoD feel good about their game’s fiction and a bit worried that the “catastrophic event” might leak,” Amrich elaborated.

“This was an eerie echo of last year, when President Obama started talking about rare earth minerals two months before Treyarch revealed it was playing a role in the story of Black Ops II.

“Say what you will about its over-the-top gameplay and action-movie attitude, but Call of Duty still plays in the realm of plausibility.”

Well, yes: but only because the US military plays in the realm of science fiction. And we’re still waiting on the TED talk about dogs wrestling men from helicopters:

Call of Duty: Ghosts comes out on November 5. You getting it?