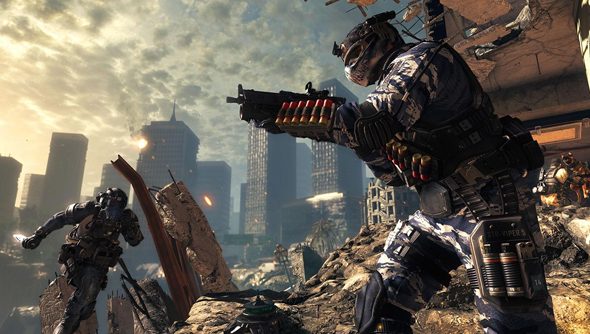 The popular military shooters have enjoyed a funny old relationship with actual people who shoot other people over the years. Their relentless advertisement as the peak of authenticity stands in conspicuous opposition to, well, everything about them. Modern Warfare bears little resemblance to modern warfare, and Ghosts’ lighting rods from space will see Call of Duty drift even further into oppression fantasy fiction, despite Activision’s insistence otherwise.

Thankfully, the man in charge of making them seems to know that.

“We do get to work with a lot of military guys in general, and that’s been a phenomenal experience over the years,” Infinity Ward exec producer Mark Rubin told Game Informer, from the same chair they’ve apparently had him sitting in for weeks. “There’s an enormous amount of appreciation for what they do, and in no way do we feel we are a representation of what their lives are like.”

Soldier consultants have sometimes provided the inspiration for the series’ missions, but that’s more or less where the likeness ends.

“We are trying to be a cinematic movie experience based on authentic equipment and authentic experience,” Rubin went on. “A lot of the stuff that we show in the game has been done by someone, but it’s not a representation of what they do or it’s not an equivalent in any way of what they do. We’re just trying to make a fun movie.”

Despite this, it seems military personnel don’t necessarily plump for Arma in their spare time (DayZ creator and former New Zealand Corps of Signals officer Dean Hall being the notable exception). An American flag hangs in Infinity Ward’s lobby, sent along with an officially-marked letter of appreciation by a helicopter squad who’d flown it on an operation in Iraq.

“That was a really cool thing,” said Rubin. “Better than winning any awards. That’s the awards that we want to win, in a sense.

“We know they are fans and they’re doing something extremely difficult. And anything we can do to make their off-time better, we’d be silly and selfish not to.”