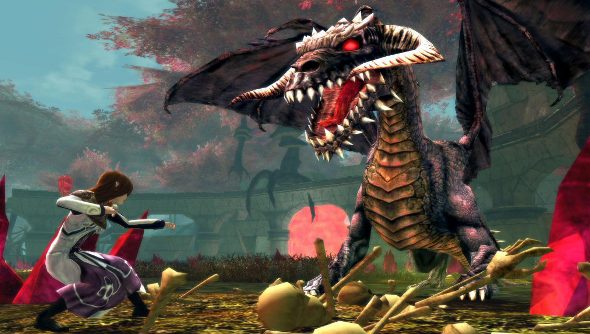 Turbine’s going to have a busy year come 2014, with the DDO developer planning four significant updates for the aging fantasy MMO. I confess that I sometimes forget about the existence of DDO, despite thoroughly enjoying myself whenever I remember it’s a thing and I pop back in to poke beholders in the eye.

In a letter to the community, the plans for the future are laid out, as well as an honest look back at the failures and successes of the last year. Major bugs and exploits are apologised for, while the inclusion of enchantments and the large adventure area of Storm Horn mountains are celebrated.

But who cares about the past? Stupid past-dwellers, that’s who. Onto the future stuff!

2014’s first update will bring with it two level 30 raids taking place within the dwarven ruins of Thunderholme, with a third raid being potentially added later in the year. And with the impending 40th anniversary of D&D, the classic Haunted Halls of Eveningstar module will be getting two tribute dungeons, one matching Ed Greenwood’s published module, and an extended one based on his unpublished notes. Greenwood himself will provide the dungeon master’s voice, and even an author’s commentary if you’d like to learn about the module’s creation. Quite a lovely anniversary present; certainly better than a gaudy ring or a bouquet of flowers.

The second update will be pirate themed, which is obviously wonderful, providing new airship models and pirate-themed aesthetic stuff. The Three Barrel Cove dungeon is also getting a new coat of paint and will be extended to epic levels. The penultimate update takes adventurers to the magic-scarred desert of Anauroch where you can battle the Netheril and a new foe, the “enigmatic” Phaerimm.

The final update of the year will see the level cap increased to 30 and the focus will be on improving the current systems like Epic Destinies. This is just the confirmed list of additions, with more possibly waiting to be added closer to the time, like new classes, crafting and maybe even player housing.

It sounds like Eberron and the Forgotten Realms are going to have an interesting year.