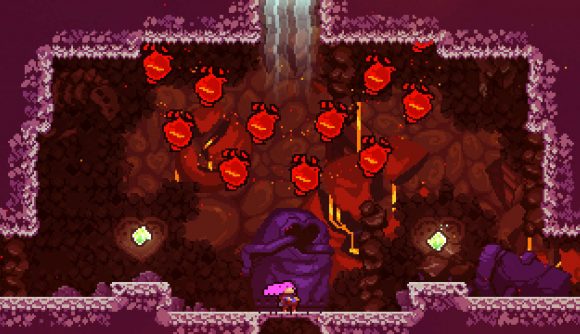 Celeste fans, rejoice! Chapter 9 of the platforming masterpiece – our pick for PCGamesN’s Game of Year 2018 – is coming. Its creators have just announced that the new chapter’s just around the corner with some exciting new details, also packaged with another surprise announcement – developer Matt Makes Games is basically no more, now replaced with a new studio name, Extremely OK Games – or EXOK for short.

In a news post on the newly-renamed studio’s site called “Hello, and Farewell”, Celeste dev Matt Thorson announces that Celeste Chapter 9 will be called Farewell, and it’s coming very soon. He says “saying goodbye is never easy. Finding the right way to send off the characters and world of Celeste was especially difficult for us, but we’re very excited about what this chapter became.”

The chapter will bring a new story to Celeste, with over 100 new levels, and over 40 minutes of game music by Celeste composer Lena Raine. Plus, the post reveals that there will be “brand new mechanics and items to discover and play with” and you’ll get the chance to “reconnect” with some of your best-loved characters for a “final goodbye.”

When will Celeste Chapter 9: Farewell release?

Farewell is due to arrive on September 9, and to get it, you just have to complete Celeste Chapter 8. If you’re yet to experience the beautiful and challenging platformer, you can grab it on Steam, ready for when Chapter 9 arrives.

Best of all, it’ll arrive free on all platforms (though the Xbox One version might release a little later), and it looks like a limited run of physical Celeste copies will soon be in the works – the post says that now Chapter 9 is done, it will shortly enter production.

If you’re keen to know more about how Celeste Chapter 9 came to be, EXOK says people who sign up to its mailing list will soon see a big post about the creation process behind it, but Thorson says “it’s spoilery so it’ll hit the mailing list in a week or two.”