The important question to ask of Julian Gollop’s PC comeback is the same as for every other early access game: just how unfinished is it? In X-Com terms, Chaos is still missing its luminous globe and industrious anthill – the greater context to lend weight to the outcome of every struggle. That’s still some way off, in the form of a procedurally-generated single player campaign.

What’s here already might be enough, though: a turn-based multiplayer arena-battler built on the same precepts as Gollop’s best work: thoughtful unit placement, risk mitigation, and the smiling exasperation of a good plan gone tits-up. Wizard.

Chaos Reborn plonks two-to-four opponents down on a board, and asks them to kill each other with a clever combination of summoned monsters and offensive spells. Each spellcaster and creature is allowed one move and one action, after which point they’ll pass control back to the enemy. The maps are small enough that one wizard is rarely more than two moves from another on the first turn. It’s over, literally and figuratively, in a flash.

The twist is that Chaos is like a bad trip: you’re floating above yourself. That’s you down there on the board, in the hood with the nobbly stick – and the consequences of your death are immediate and match-ending.

The effect is to leave you feeling at once vulnerable and powerful. The wizard is your Queen piece, and you’ll be forever grappling with two simultaneous urges: to hide them away in a corner of the map, or push an advantage and cast the game’s more dangerous direct spells up close. 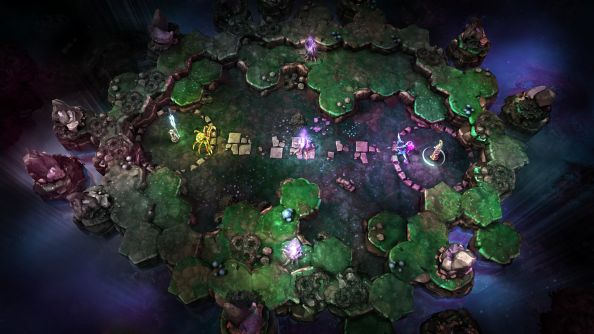 There are no namby-pamby hitpoints here. Whether they’re a tile-filling giant or shivering rat, it takes just one strike to dispatch any given unit. A minion is either dead or it isn’t – only the chances of landing a hit change.

About that: expect a higher level of randomisation than you’re used to seeing on the PC. Games Workshop published some of Gollop’s earliest games, and there’s clearly still a shared tabletop ethos at work here. Any spell you cast or punch you throw in Chaos is tied to a percentage. As in X-Com, the best the player can do is steer the probabilities in their favour and make good bets.

There’s no doubt that’ll put some off. If you’re somebody who regularly dresses down Hearthstone for its high RNG, you’re not going to find solace in Chaos. Sometimes, against the odds, the staff of one wizard connects with the skull of another and a match is over in 60 seconds. Your win-loss ratio is never entirely yours to control.

But persist and you’ll discover that Chaos’ greatest highs lie in determining the risks, deciding which you’re comfortable with, and crossing every available finger as you left-click. 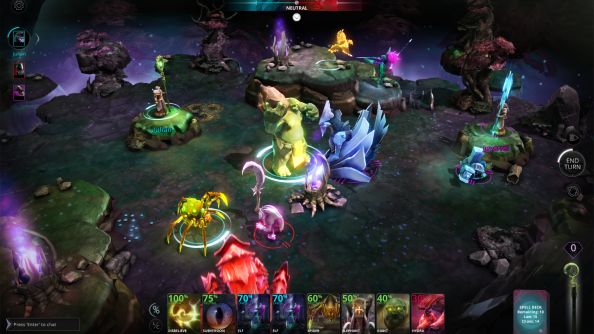 A mana system, newly added since the game’s Kickstarter prototype, helps mitigate the gambling. By discarding an unwanted spell from the zeitgeist-friendly hand of cards displayed across the bottom of your screen, you can top up your staff’s supply of magical essence. Those mana points can then be used to bump up the percentage chance of success when casting.

There are sensible limits – mana wells are placed sparsely around the board, and there are a limited number of cards in your deck to burn. But it’s enough that the game’s most powerful and tricky summons aren’t so unattainable as they otherwise might be.

The opposite forces of Law and Chaos, too, weigh in on proceedings. A lawful dwarf or chaotic skeleton can shift the overall alignment of the map one way or the other, influencing the likelihood of subsequent spells coming off.

All of this encourages players to think beyond the next turn and plan long-term plays. That skeleton you just summoned? Not just a solid rat deterrent but a way to add to the chaos, so that you might call on a hydra later. 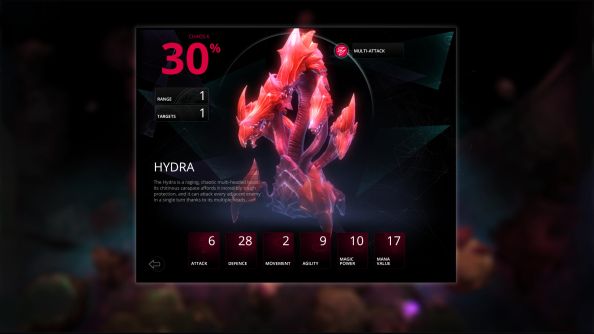 Or you could just skip the percentage business altogether and fill the board with make-believe monsters.

This is Chaos’ second twist. For every creature card, you’re given the option of instantly summoning a pretend alternative. These cardboard tanks aren’t pushovers, but fully-functioning units that can strike blows just as real as their legitimate counterparts – even killing enemy wizards if they’re taken in by the ploy.

But if your opponent so much as suspects foul play, they can test their theory by ‘disbelieving’ an offending creature – who’ll promptly pop out of existence if they’re false. If not, well: there’s a cruel satisfaction to be found in watching your enemy attempt to wish an all-too-real dragon out of existence because they’d rather not face your version of reality.

In earlier versions of Chaos, the odds of successfully summoning a tough creature were slim – slim enough to encourage bluffing. But mana points have changed all that: with good planning, sapphire dragons and hydras are now in easy enough reach that you can go several matches without fabricating a thing. 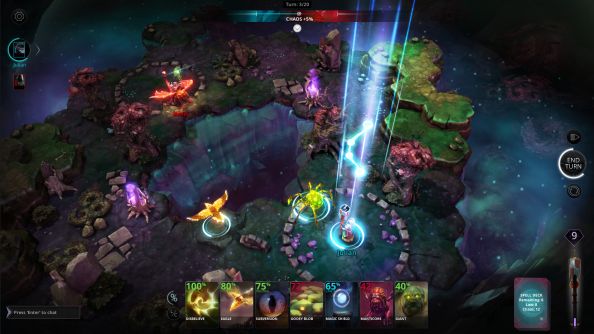 That’s a balance issue, but there are other visible symptoms of Chaos Reborn’s state of flux. The game has a feedback problem: the battle dialogue that runs along the top of the screen can sometimes confuse rather than clarify. Certain spells are tied to a levelling system that’s poorly telegraphed. And rules for ‘engagement’, which often decide whether or not a unit can move to a certain space, are badly explained outside of the online manual.

If Chaos’ tutorials have been thus far neglected, however, its aesthetics haven’t. Snapshot have given the game a visual upgrade to reflect the stark, brilliant neon of their Kickstarter campaign’s concept art, and those craggy creatures remain just as distinctive in motion. Law units in particular have a crystalline, shard-like quality to them that can be quite beautiful – witness the strikingly polygonal heads of the dwarf or unicorn. And even neutral cards, aligned to neither law nor chaos, aren’t without character – instead styled as the side of nature. Their staffs come wrapped in climbing vines.

And while there’s still the charming presence of the occasional X-Com sound effect, the music is one part of Chaos evidently already finished. The score is awash with familiar fantasy wonder, but underlined by strings that threaten to twang with tension. 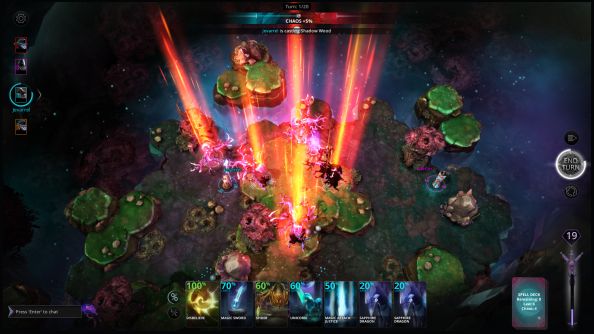 I’m convinced I’ve heard the soundtrack subtly stabbed by discordant horns as the alignment of the map slides into chaos. Meanwhile, the rocks of the forest around the arena’s exterior lift into the air and begin to circle the combatants ominously. Clearly, as much thought has gone into Chaos’ visual design as its ruleset.

That ruleset provides strong foundations. This is a game better suited to multiplayer back-and-forth than Firaxis’ XCOM, which refused to pare down its mammoth and multi-layered maps for two players. In Chaos, you can get the lay of the board in a glance.

It’s perhaps even better in asynchronous multiplayer – a concept familiar to 4X genre fans, but also a throwback to Gollop’s play-by-email days developing Laser Squad Nemesis. You can have several slow-burn games running at once, and take turns at your convenience.

There is a snag. Snapshot say player numbers have doubled over Christmas, and a dedicated base ensure that live match-making speeds are quick at all hours (you’ll wait an extra 30 seconds on Monday morning). But the community’s not yet so large that you’re guaranteed asynchronous games in your timezone, and there’s no option to specify. Instead, I’ve found myself logging in during the morning to see what moves have been played overnight – and sometimes been left 12 hours to fume over a single casting failure. 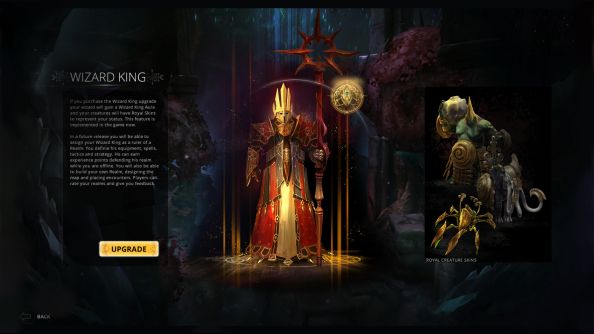 That’s a small matter, easily solved. What Chaos Reborn is most notably missing right now is its metagame – the very thing that made X-Com more than the sum of its sectoid corpses. Something to imbue every move with meaning beyond the conclusion of a match.

Eventually, Chaos will include Realms – campaigns played out over procedurally-generated overworlds in the mode of Age of Wonders 3. The game’s menus are choc-a with compelling descriptions of features that don’t exist yet – equippable items found in single player; a forge for building staffs and choosing their stats; a social ranking system that casts players as ‘protectors’ of regions in the Realms, or even designing parts of them – the sort of thing that Molyneux might dream up.

It’s all terribly ambitious – but still months from completion. Chaos in its current state is a little game – exquisitely formed and eminently replayable, but played on a small set of maps with a handful of cards.

Buying in now expecting a fully-blown RPG is a gamble. But then Chaos, like X-Com, is a game about gambling. And even if Snapshot’s best-laid plans were to fizzle out, we’d still be left smiling.