Age of Wonders has crawled out of the Lazarus Pit; a classic series given a new lease on life. Whole randomly generated worlds are waiting for the first explorers to ramble around in, filled to the brim with tombs to pilfer, caves to delve into and dragons to shove swords through – which will probably upset them.

I’ve spent several days slaughtering fundamentalist goblins, stomping on iron golems crafted by elves and burning down the cities of magical dwarfs. It’s a strange, egalitarian game where anyone can be anything and that’s only the tip of Age of Wonders’ quirks. But it’s still a 4X game built on familiar systems; a strong foundation on which Triumph Studios has constructed an addictive, clever game.

The tenets of eXplore, eXpand, eXploit and eXterminate are alive and well in Age of Wonders, but it’s the final X that informs most of the game. There’s still diplomacy with alliances, peace treaties and all that olive branch nonsense, however. Games can even be won by being lovely, but it’s better used as a tool to give your empire some breathing room. Make a treaty, take some turns to rebuild, and then start the march to consume lands and cities all over again.

It’s an aggressive game, but not restrictive. Freedom oozes out of every pore. There’s an abundance of leader races to fiddle around with, most of them typical of the fantasy genre, from elves to orcs, but they aren’t forced into a specific class. Elves don’t need to be nature-loving hippies with a penchant for arrows and magic, nor do dwarves need to live underground or be obsessed with mining, drinking and fighting dragons.

The leader creator offers up all manner of combinations, as well as schools of magic – entirely separate from class and race – which will define much of the ensuing game. The life as a goblin Dreadnaught will see filthy hives of scurrying green monsters being raised, but some of them will also have muskets or drive huge, flame-spewing tanks. Going down the holy route, making a goblin a Theocrat, provides the same base goblin units, but religious warriors and terrifying siege engines that unleash divine energy at foes mix things up.

Leaders are the heart of the game. The most powerful units, they can turn the tide of battle and cast deadly spells at a reduced cost. But they aren’t invincible. When slain, it takes three turns for them to reappear, and if the enemy conquers the throne city beforehand, then that’s it’s goodbye world domination. Their strength is balanced by that massive vulnerability. Other heroes may join them in their bid for power, however, and they can be just as deadly, leading vast hordes to war. 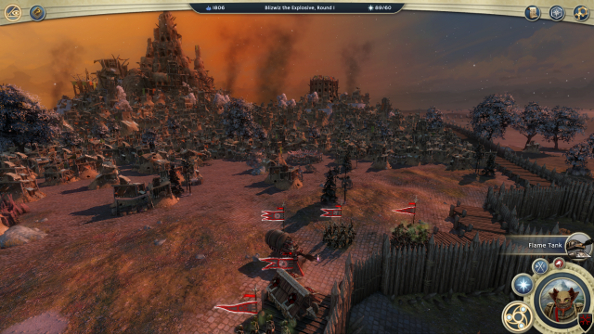 When these hordes clash with others, the action shifts to hex-based tactical battle maps. Scraps can be automated, both before the battle even takes place or during the fight itself, letting the AI do all the heavy lifting. The auto-battle options is handy for those times when the enemy only has a couple of puny units and it’s not worth the effort, but the combat is so engaging that I often forgot it was an option.

Terrain plays an important role. It’s informed by the location engagements take place in, from frozen tundra to desolate magma plains. In sieges, defenders hide behind walls while the attackers hammer away, trying to create gaps and paths inside. Pastoral maps can be dotted with fences, farm houses and rocks. Awareness of how the environment can be exploited is paramount.

A weaker force can topple a foe by using the environment to its advantage and exploiting positioning and magic. Units get flanking bonuses, spells can be thrown at enemies to make them vulnerable to particular attacks and cover can preserve units until they can be brought out for a sneaky attack.

Despite the six unit limit to each army, fights become titanic. Multiple armies can be positioned around an enemy or a city, bringing each of them into the battle. With extra heroes and a sea of angry men, orcs, goblins or summoned beasties, the truly monumental battles are complex affairs. Fireballs explode everywhere, troops sucumb to poison, siege engines carve through the ranks and assault walls – there’s a lot to keep track off. A clear UI is a helpful guide, with buffs, stats and damage potential information available at a glance. 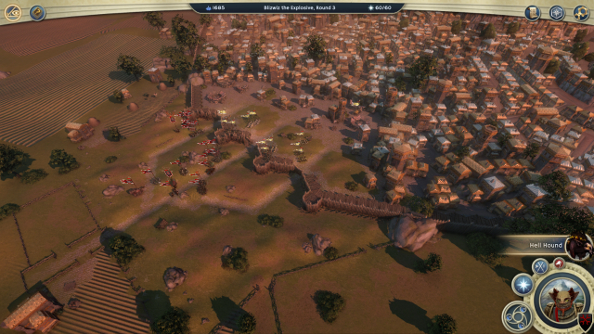 The battles offer a welcome new perspective, as well. Most of the game is spent looking down from the heavens at the, admittedly, gorgeous and diverse maps. When combat occurs, however, the camera moves into the thick of it. The little cities suddenly become large battlefields and a single hex transforms into a war-torn region filled with obstacles and buildings. The textures and character models are basic, but the scale still manages to impress. The camera controls are sluggish and unwieldy, however, and this makes navigating the conflicts more fiddly than it should be. The last thing you need when facing an army of dwarves with shields as large as their bodies is an unresponsive camera.

The AI isn’t a pushover. It’s aggressive and expansive, spotting weaknesses quickly and rarely attacking unless the odds are in its favour. I’ve been handed more than a few embarrassing defeats in Age of Wonders, even when playing below the top tier difficulty. Independent factions and wandering enemies – like dire penguins – pepper the map or protect ancient tombs or the entrances to underground realms. They serve as small obstacles, occasional quest-givers and little combat tasters. Such confrontations are easier, offering a way to get more experience and items before tackling the main course.

Progression is a three tier process, with two strategy mainstays: city construction and research. You start with a throne city – a capital – and can conquer new ones, but settlers can also expand borders. New cities churn out units, provide resources based on what special locations are within their borders. It’s also where new buildings can be constructed, expanding the units can be generated. There’s a spot of resource and economic management, growing populations and providing currency for new toys – but it’s mainly about feeding the war machine. 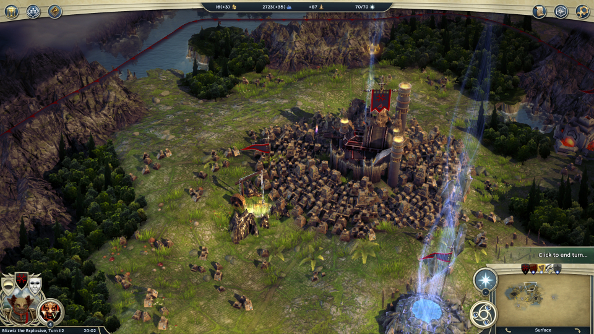 Builder units can also slap down fortresses and watchtower. The former is a single defensive structure where troops can be garrisoned and used to defend bottleneck. The latter simply expands the field of view, providing early alerts to devious incursions.

Research just sort of happens. I was never inspired to explore the inner workings of the system, speeding it up, because I always seemed to be unlocking new items in my great tome of random knowledge. It’s a hefty tome, where advanced units, new spells and modifiers are researched. Sometimes unlocking one item reveals a more powerful version: Random Power-up I becomes Random Power-up II. Other times an entirely new item will appear, waiting to be unlocked. It’s less clear than a tech tree, but just being able to take a quick look, choose something and get back to all the killing in less than 60 seconds is rather convenient.

The third tier is decidedly more RPG-like. Leaders and heroes can level up, suddenly realising they have a bunch of extra space in their brains or bodies for new ideas of more muscles. New spells, special abilities, increased damage – there’s a long list and plenty of room to customise these mighty generals. Items can be shoved into slots adoring the heroes, sometimes providing boons, but occasionally making them weaker to certain magics or effects to balance out all the good stuff. 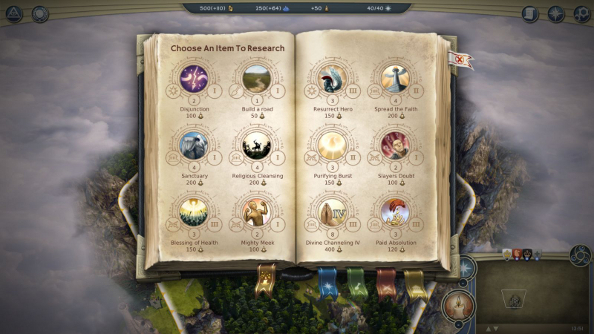 But besides the occasional new ability, most of the improvements that come from gaining a new level are subtle changes behind the scenes: a minor ranged damage increase here, a movement buff there. The growth isn’t nearly as dramatic as it is in the RPGs it mimics, or even in other tactical games like XCOM. The layers of incremental stat increases means that, by the end, heroes and leaders are considerably more powerful than they are in their infancy, but the changes simply aren’t very striking.

Where Age of Wonders truly excels is in its pace. Where many 4X titles, even the giants like Civilization V or Galactic Civilizations II, have lots of lulls where you’re just clicking “next turn”, Age of Wonders has momentum in spades. Units tend to get built quickly, there’s never a dearth of monsters or factions to fight, new skills crop up constantly and there’s no time to linger. It’s fast and driven, even in games that go on for hundreds of turns.

And it’s rarely laborious or exhausting. Between turns, you can take a breath, browse the map and plan your next assault. You’re not being thrust forward, tumbling from turn to turn, lost and confused. The pace is encouraging: there’s always something about to happen, so why not go and see what it is? 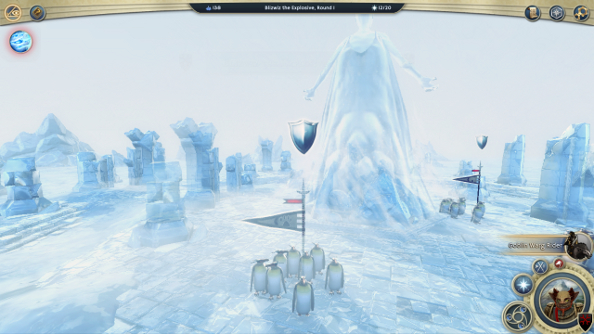 There’s a point where the freedom hits a ceiling, though. The laser focus on combat and haste means that the discovery of new things, be they units or spells, peters out, leaving one single goal: crush the other factions. And when they are entrenched and flinging powerful spells around like confetti, that can be easier said than done, taking many turns after you’ve got your last shiny new toy.

Conveniently, the random map editor alleviates the issue with a range of options that can be employed to fine tune a game, making it short and sweet, or more leisurely. The level of control is impressive, and not just when deciding on the terrain type, different landmasses or who you’ll be fighting. Even the momentum of a game can be tweaked. Select the “Battle” gameflow, and you’ll start with lots of armies and focus on immediately confronting other players, whereas “Adventure” gives you a single army on a map with few cities, encouraging exploration. Everything can just be set to random so you can just sit back and wait to be surprised.

I’m not sure if anything is worth waiting 11 years for, but if it was, it would be Age of Wonders III. This isn’t Duke Nukem Forever, shoved out the door to exploit ravenous fans. Nostalgia has a lot of weight, and this definitely feels like something that could have existed over a decade ago when we were swimming in turn-based strategy, but that’s not why it’s great. It builds on its past rather than just using it as currency. The familiar sits beside the modern, the fleshed out classes, the deeper tactical combat. It’s the best that Age of Wonders has ever been.