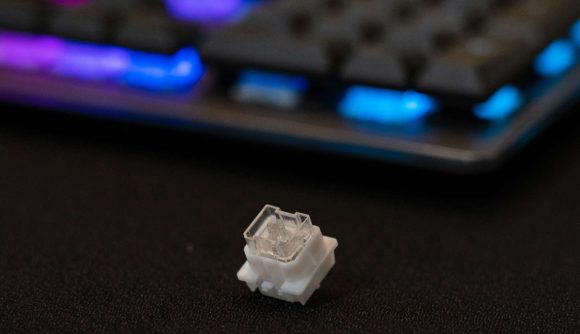 For the uninitiated, the mechanical keyboard switch is the physical tech sitting below each and every key on a high-end gaming keyboard. And the reason they’re only used on the high-end boards is because with so many moving parts, and precise engineering, they’re more expensive to manufacture than the rubber membranes used in cheap boards.

But mechanical switches feel better to use, last longer, and actuate faster than a membrane switch, which is why they’re so sought after and fill up our list of the best gaming keyboards. The new Cherry Viola switch, however, promises to bring all that mechanical good stuff to a far broader audience. And don’t worry, it’s been very much designed with RGB in mind, so you won’t even miss out on all the joy that a board-based LED lightshow can offer. Thank the maker, right?

Cherry is the name in mechanical keyboard mechanisms, and if your mechanical board isn’t rocking a bunch of Cherry MX switches then you can bet your last red cent they’re heavily based on them. So the fact that Cherry is bringing its engineering know-how to the more affordable end of the keyboard market means there will soon be a host of cheap gaming keyboards with the performance and feel of mechanical switches.

One thing that Cherry doesn’t say about the new switches is how long they will last. The German switch maestro has also just launched an updated MX design which offers an upgraded 100 million keystroke lifespan to its switches, up from around 50 million. 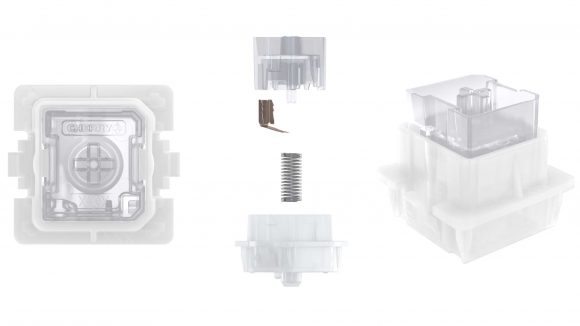 The company says that it has been able to replace entry-level tech, such as rubber dome switches, with its new Viola technology “thanks to a simple design, a unique switching characteristic, and a new contact system.”

The new V-Shape contact system uses what it calls a “minimalist, solderless design” which will surely aid its affordability. It’s also largely made of plastic, so that helps, but it’s also a hot-swappable design which means each switch can easily replaced without any additional soldering efforts needed.

Cherry generally defines its MX switches by the actuation, whether that’s linear, clicky, or straight tactile. Basically that means a clean travel, a bumpy, noisy travel, or a horrible gritty travel of the key when being pressed down. The Cherry Viola, however, have a ‘CrossLinear’ travel. Which kind of doesn’t fit in any category. 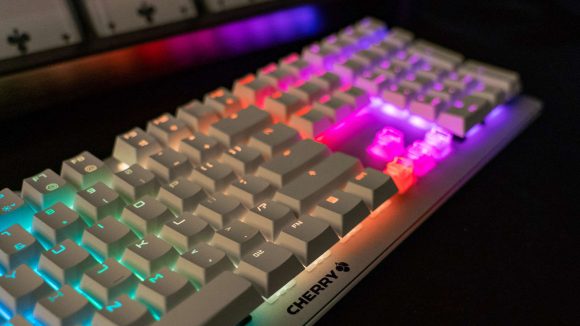 It has a 45cN actuation for the first 2mm, and then that ramps up to 75cN until it bottoms out at 4mm. The idea of this ‘CrossLinear’ travel almost seems to be it mimics the erstwhile membrane keys it’s replacing. If you’re the sort of person that likes the deadened feel of a membrane switch, first, we spit on your soul, and second, this switch is for you. You subhuman scum.

I’ve yet to have a go on the new Cherry Viola switch, so I could be completely wrong on that front, they could simply feel a lot like the old Logitech Romer G switch that they resemble on the surface.

But hopefully there will be a slew of affordable gaming keyboards using the new tech soon that we can lay our mitts on.