Cities: Skylines – After Dark, the first expansion for Colossal Order’s rather brilliant city builder, launches today. I’ve done my fair share of gushing about the base game – I reckon it’s the best thing since SimCity 4, maybe even better with mods – but being the horrible cynic that I am, I wasn’t really sure that a night-time expansion was something it needed.

My first few hours in my new city made me lament that my doubts may have been well-founded, but as I lost track of time and started expanding my metropolis, digging into the game’s well-refined systems, I started to change my mind.

When the sun set for the first time, I was taken aback by how lovely my city looked. It’s always been a pleasure to gawk at, but for the first time, as my roads were lit up by hundreds of tiny points of light and the neon signs sprang to life, it actually looked like a real, honest-to-goodness city. I was staring at what could have been an aerial photograph. 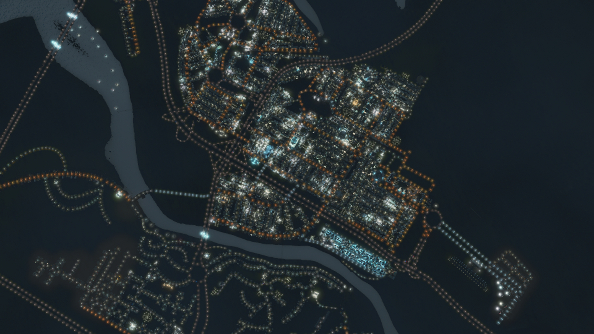 It is, admittedly, trickier to build at night, as the neon-drenched streets can be a bit distracting, and outside the city plots are pitch-black, but Colossal Order seem to have taken this into consideration, giving the cursor a subtle glow that gently lights up the area beneath it. On my darker laptop screen, it was still less than optimal, but playing on my desktop, I got used to the evening.

Along with a day and night cycle, After Dark heaps new buildings and systems onto the already pleasantly plump game.

Let’s start with the buildings. These are possibly the least exciting aspect of the expansion. Cities: Skylines has been blessed with a hard-working community of modders – just check out our best Cities: Skylines mod list for proof– that have diligently crafted some properly impressive structures, both cosmetic and functional. I can plonk down a lovely German castle next to McDonalds or a redesigned power station next to my Soviet-era Russian statue, and none of this requires me to spend money on DLC or an expansion.

There’s simply a mind-boggling array of mods, many of them of professional quality, and After Dark’s new tourism-focused buildings aren’t particularly impressive when compared to some of the stuff modders have been working on. You’ll be able to unlock niftier ones as you build up tourist districts (more on them shortly), but they don’t feel particularly new, since there have always been buildings that draw visitors into the city. 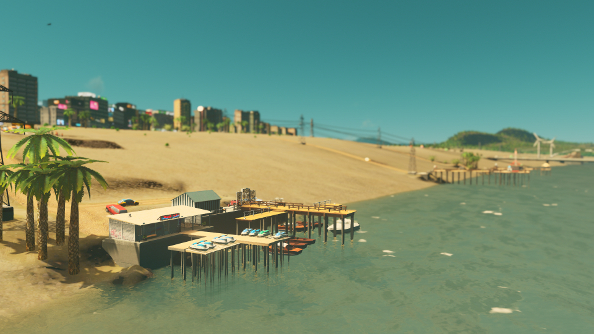 Building variety is certainly greater than in the base, modeless game, however, particularly when it comes to growable buildings. This conveniently leads us to one of the most notable new additions to the game: more district customisation. Now it’s not just industrial districts that can be specialised; commercial ones can be given a focus too.

These areas can now be zoned for tourism or leisure. The former makes hotels, souvenir shops and tourist traps spring up, while the latter makes casinos, restaurants and other nightlife spots sprout out of the ground. They give cities a new visual identity, particularly at night when they are all lit up. You can tell that an area has been designed for tourists just by looking at it, as they all ooze unnatural blue light, beckoning travellers and visitors.

Specialised commercial districts each affect the city income differently, as well, depending on how you’ve built the rest of your metropolis. If you’ve built some of the new tourism buildings, for instance, and plonked down lots of monuments and impressive buildings, you’ll be able to make a boat load of dosh from all the holiday makers who make the trek to your city and splash out in your hotels. 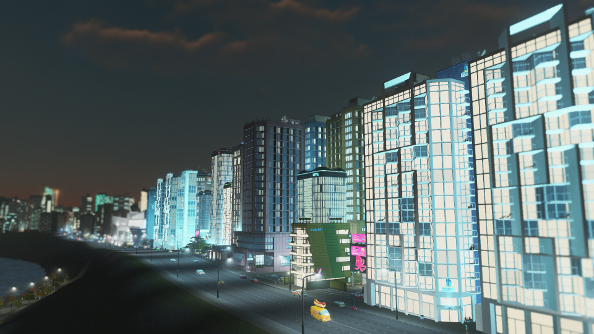 All this extra control over how cities grow is what ended up engrossing me, much more so than the new buildings or the, albeit pretty, visual transformation. It goes beyond new district focuses, as well. When that big ol’ ball of hydrogen and fire sinks below the horizon, another type of transformation grips the city. Crime increases, traffic decreases and people start spending time in different areas.

It’s a bit like running two cities, which is why there are now budget sliders for both day and night. I always end up struggling to deal with rubbish and corpses. At a certain point, my poor planning and road construction means that the bin men and hearses end up spending most of their time in traffic. Night changes all of that. The streets get a bit quieter when the sun’s down, so I increase the budget for those services at night, when the roads are clear. I also increase the public transport budget, so midnight revelers are more likely to take the bus.

There are taxis and roads with taxi lanes now, too, offering more options when planning your elaborate, serpentine road network, easing the pressure on all that tarmac that cuts through your city. And it’s just as well, because the new specialised commercial districts draw in big crowds, creating traffic jams everywhere if you’re not careful. 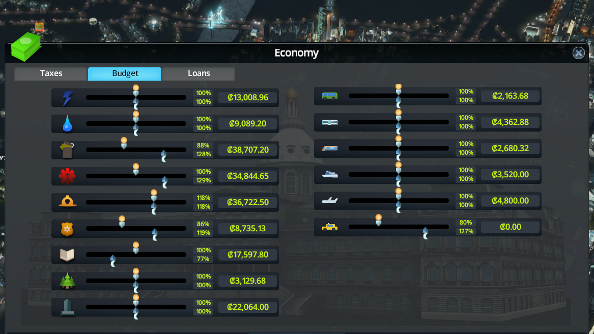 So it’s not just new solutions to old problems that After Dark addresses – it creates fresh, and more interesting, issues that require a city-planner’s attention. Take supplying energy: now that cities aren’t forever trapped in daylight, a city running exclusively on solar power is going to take a hit after dark.

One of the most meaningful new challenges is dealing with crime. There’s the aforementioned rise in crime that occurs at night, but there’s also a new crime model that changes its impact and how it’s dealt with. In the base game, crime was tied to the city’s happiness, but now it’s more elaborate than that. There are actual criminals, and police have to visit locations and investigate criminal activity, ultimately arresting crooks and taking them to the new jail. It’s no longer abstract.

My new city is still growing, and I feel like I’ve only just scraped the surface of the changes. Cities: Skylines was kept fresh thanks to its army of modders, but After Dark tweaks every single element of the game so that, once you start rooting around the budget panel and customising districts, it starts to feel new again. And it will probably feel new all over again once the modders get their hands on the expansion.